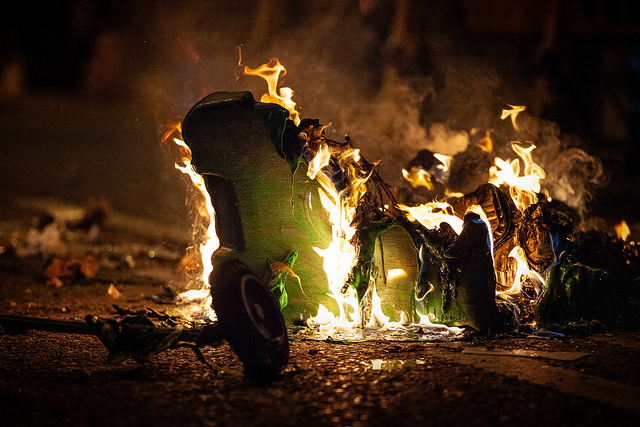 CommonSpace editor Ben Wray looks at how climate activists should respond to the Yellow Vests movement in France, which has defeated attempts to impose taxes on fuel prices

THE UN Climate Summit in Poland saw a heartfelt appeal from Horizon presenter David Attenborough for world governments to save civilisation.

It’s strange to write that sentence in a matter-of-fact way, but that’s where we are at with the climate crisis: the world is totally distracted by today’s crises, as tomorrow’s existential one rumbles ever closer.

The unrealness of attempts in Katowice to stop climate catastrophe – all polite appeals and snazzy videos in cosy conference halls – stands in stark contrast to the Yellow Vests movement raging across France. The ‘Gilet Jaunes’ denotes urgency and expectation – the French don’t ask for a decent standard of living, they fight until they get it.

The Yellow Vests will be thought of by most in Katowice as the antithesis of climate justice. Angry French 40 year old lower middle class men demanding to drive their cars cheaply. French President Emanuel Macron gave into protesters original demand by postponing what had been sold as an eco-tax rise on fuel, with money raised to be used to finance green investment.

READ MORE – Media Rebuttal: The #YellowVests movement is not ‘nihilism’

Many climate activists will understandably despair, but they would be wrong to do so. For the Yellow Vests are not the antitheses of climate justice – if that word is to have any meaningful political content in the west, it has to be about combining demands for a better life in the here and now with a sustainable planet.

The price of diesel, the most commonly used fuel in French cars, has risen by around 23 per cent over the past 12 months. Climate activists cannot expect the people who paid for the financial crisis to just suck it up and pay for the climate crisis too, while 40 per cent of global emissions are caused by the richest one per cent.

As many commentators have observed by now, the Yellow Vests movement is not really about fuel prices. That issue has merely acted as a trigger point for massive social discontent.

Author Christophe Guilluy writes in the Guardian that the Yellow Vests movement emerged out of ‘peripheral France’, a demographic that has suffered a “social and cultural shock” from the dislocation and alienation of modern neoliberal economies.

“The change is not down to a conspiracy, a wish to cast aside the poor, but to a model where employment is increasingly polarised,” Guilluy writes. “This comes with a new social geography: employment and wealth have become more and more concentrated in the big cities. The deindustrialised regions, rural areas, small and medium-size towns are less and less dynamic. But it is in these places – in “peripheral France” (one could also talk of peripheral America or peripheral Britain) – that many working-class people live. Thus, for the first time, “workers” no longer live in areas where employment is created, giving rise to a social and cultural shock.”

it’s in shaping the response to that social and cultural shock where the hopes for climate transformation lie, not in the plush Summit of Katowice. The Washington Post reports that “in the daunting math of climate action, individual choices and government policies aren’t adding up.

“Solar panels are being nailed to rooftops, colossal wind turbines bestride the plains and oceans, and a million electric vehicles are on U.S. roads — and it isn’t enough. Even if the world did an unlikely series of about-faces — halting deforestation, going vegetarian, paying $50 a ton carbon taxes, boosting energy efficiency, doubling car mileage, and more — it would not be enough.”

So Macron’s eco-tax on fuel was never enough anyway – if that is what the climate movement is going to get behind, the Yellow Vests would be right to ask ‘what’s the point?’

The truth is, nothing within the imaginary of Macron will deliver the sort of rapid and radical overhaul of our social and economic order that is needed. CommonSpace has reported previously on the draft report of Finnish academics to the UN 2019 Sustainable Development report, which argued that state planning is the only thing that can now deliver the unprecedented changes humanity needs. Neoliberal Macron would rather the world go down in flames than give up on his ideological commitment to markets.

And it’s not as if “peripheral” France, Britain and America cannot be constituencies which could be won over won to proposals like rapid decarbonisation of housing through a mass insulation programme. The first data releases from the Scottish House Condition Survey 2017 came out today [5 December] showing a widening fuel poverty gap between rural and urban Scotland, twice as big in rural areas as it is in urban ones. The survey also found that half of all homes in Scotland have disrepair to critical elements, such as weather-tightness and structural stability. It’s the rural and semi-rural poor who have most to gain from a green new deal, and it’s the gains of zero-carbon infrastructure overhaul that need to emphasised over taxes.

Writing about the emergence of the climate direct action movement Extinction Rebellion, a very positive development in Scottish and UK politics, we argued: “Just as those who deny climate change cannot disprove science, climate activists moral reason cannot over-ride politics. A green revolution can be won, but it will be with the majority behind us or not at all.”

If that is true, climate activists should put more hopes in the Yellow Vests than they do in the suits in Katowice.