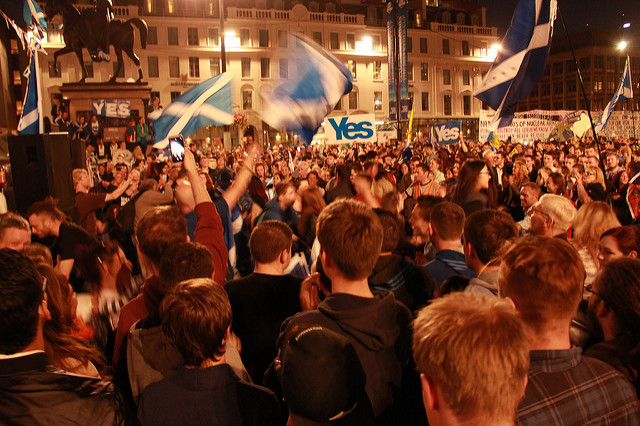 THERE are many reasons that can be outlined as to why the Yes Scotland campaign was defeated in the 2014 Scottish independence referendum campaign: the unworkable idea of a currency union, the lack of initiative taken up with regard to getting stories out into the mainstream media and maybe even the premature arrival of the vote itself are just to name a few.

But it cannot be doubted that Scotland will almost certainly head towards a second vote on independence before the end of the decade. The dramatic impact of Brexit has caused the first minister, Scottish Government and much of the Scottish electorate to revisit the possibility of Scotland becoming an independent country sooner rather than later.

Many Scots who voted No in 2014 will, without question, now be looking to the possibility of backing independence this time with a view to Scotland taking its place within the European Union. Given the goodwill shown towards the Scottish nation from across the continent so far, it is all but certain that the EU will embrace Scotland with open arms.

Many of those voters who didn't back a Yes vote should have every right to expect to be inspired and reassured by a future and mainstream Yes Scotland campaign.

The people of Scotland should expect to look forward to having the right to enjoy a thriving Scottish economy which is run with fiscal competence and with a view to achieving growth and enabling the conditions for investment to occur.

Scotland with independence has every chance of being an economic success with a set of policies that allows homegrown Scottish business to grow and also attracts international investment.

And the people who live across the Scottish nation should also look forward to enjoying the benefits of a strong social democracy (a publicly run NHS Scotland and a much improved and more compassionate welfare system, to name a couple of examples), which can only ever be enabled by a successful Scottish economy.

This is an absolutely important point, because where Yes Scotland fell in 2014 was not emphasising enough the importance of that strong economy allowing for that strong social democracy.

They, as do the rest of the Scottish population, have every right to expect to live in an independent Scotland which is a politically moderate, sensible and thriving country at ease with itself.

Yes Scotland was seen by some as too much of a leftwing campaign. Despite the fact that Scotland is by nature more socially democratic (that left/right battle was won some three decades ago), Scotland is not a nation of socialists, contrary to popular belief.

Most Scots want a well run social democracy backed up by a strongly performing economy of which they can actively participate in and thrive within. If a future Yes Scotland campaign pursues a path of being a campaign that only manages to attractthose of a solely and fiercely left wing nature and does not open itself up to others who are sympathetic or could be potentially sympathetic to independence, then it will lose a second independence referendum.

And given the dramatically changed landscape caused by Brexit, Yes Scotland cannot afford to portray itself as a campaign concentrated to just one end of the political spectrum. It must appeal to everybody across the Scottish nation, especially to voters in strong No voting areas such as Aberdeenshire, Edinburgh, Dumfries and Galloway, many of the islands like Orkney and Shetland and the Scottish Borders.

An independent Scotland will not represent, nor should it represent, a socialist utopia, even though, on a separate note, the nation taking control over its own affairs will certainly be a cause for celebration.

It needs to cater for our whole and diverse population and its diverse range of needs if it is to thrive. The arising issues in Glasgow will not be the same as in the Highlands, for instance.

Yes Scotland was seen by some as too much of a leftwing campaign. Despite the fact that Scotland is by nature more socially democratic, Scotland is not a nation of socialists, contrary to popular belief.

No voters were not doing a disservice to Scotland when they went in favour of the United Kingdom in 2014. They understandably rejected independence, because the case for breaking away was not unambiguous and broad ranged enough, despite the ridiculous scaremongering of the Better Together campaign.

By doing this, it will look more credible than it did in 2014 and become more politically robust. The more diverse the range of ideas and opinions, the more convincing the chances of a Yes vote and the healthier an independent Scotland and its democracy will become.

An independent Scotland must cater for everyone, not just a select few within one particular end of the political spectrum, if it to have any reasonable chance of major success.