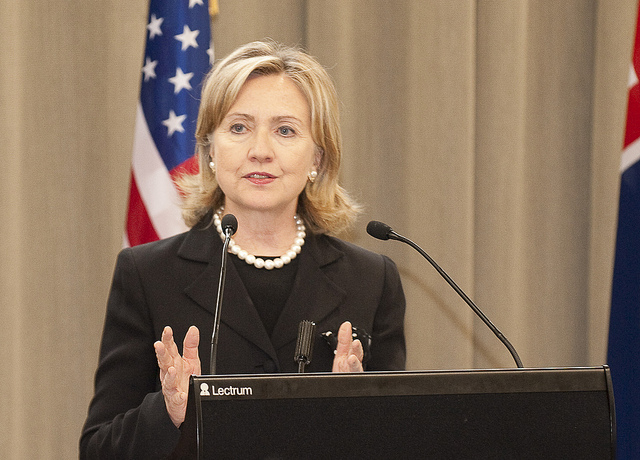 SHE might not be the most inspiring politician in the world, nor someone who has won mainstream admiration among much of the public most of the time, but Hillary Clinton made history by becoming the first female nominee for the post of president of the United States.

While many expect her, representing the Democrats, to defeat the Republican nominee Donald Trump, that outcome itself is far from certain. Her recent and last noted overall poll of polls lead was wafer thin and even one recent poll from CNN/ORC put her a worryingly five points behind Trump.

It would be absolutely wrong to deny her political prominence within American and global politics, but does she really have what it takes to overcome a Republican opponent who, despite the series of controversies he has caused, has an astonishing chance of scoring victory?

Rational logic has become surplus to requirements in the increasingly absurd world of global politics today.

Donald Trump has proven to be someone who hasn't got any real credibility when it comes to becoming a potentially effective political operator. Just look at the Washington Post last week. It described him as a "unique threat to American democracy" – those words alone are damning.

Yet, frighteningly, that won't automatically bring Mr Trump's journey to November's presidential election to a halt. He saw off his fellow Republican opponents to secure the nomination without any real threat of failure, despite his widely perceived political immaturity. He might have won that contest, but he has alienated many people, even among the Republicans.

Up until Hillary Clinton officially became the nominee for the Democrats, many of Bernie Sanders' supporters felt very unhappy at the thought of her becoming the nominee. It had to take unambiguous support from himself before there was any sign of unity behind her as far as the Democrats congregating in Philadelphia were concerned.

Sanders deserves credit for his dignity and for making a strong effort driving up the standard of political debate. It's understandable to wonder why on earth, in this incoherent and illogical political world that we live in, Sanders didn't win the nomination for the Democrats. He would have had a better chance of defeating Donald Trump.

Trump is quite clearly not qualified to be a credible political operator and seeing him as president will damage the reputation of the United States internationally.

But alas, rational logic has become surplus to requirements in the increasingly absurd world of global politics today. The United Kingdom faced a horrific and unenjoyable EU referendum last month and now the United States faces the dreadful prospect of what could prove to be the lowest quality of a contest for the presidency of the United States in American history.

Neither Hillary Clinton nor Donald Trump have what it takes to become a legendary US president. The contest will be about which one would be less bad in Washington DC.

Trump is quite clearly not qualified to be a credible political operator and seeing him as president will damage the reputation of the United States internationally. Although Hillary Clinton is a divisive politician to many, at least she is a potentially less risky US president in the making.

Good luck to the United States in making their unenviable choice.

Picture courtesy of US Embassy