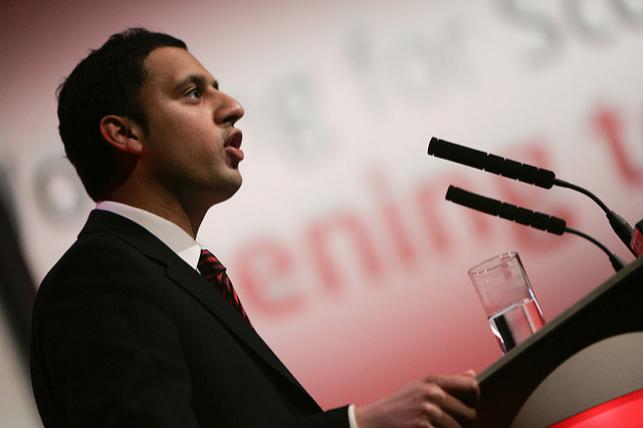 Anas Sarwar is one of two candidates in the race to replace Kezia Dugdale, reports Alasdair Clark

ANAS SARWAR launched his Scottish Labour leadership campaign on Friday in the heart of First Minister Nicola Sturgeon’s constituency, saying voters faced a choice between protesting about the country’s ills, or choosing a leader who can defeat inequality as a future Labour first minister.

In a tough day for Sarwar after his family firm refused to say if it recognised trade unions, he said at his launch that the location was no coincidence, delivering a warning to the SNP that Labour is “parking our tanks on Nicola Sturgeon’s lawn”.

Sarwar set out a series of policies he would pursue as Scottish Labour leader, including publishing a “rescue plan” for the NHS to be implemented on day one of a future Labour government under his leadership. Sarwar said that unlike the SNP, the three most important letters to him would be “NHS”.

The biggest applause from the party faithful came after a further attack by Sarwar on the record of Nicola Sturgeon: “Despite being a Glasgow MSP, despite representing one of the poorest communities in our country, Nicola Sturgeon’s SNP has presided over £400m of cuts to this city.

“Half of the children in this constituency are deprived. That is a national disgrace, and yet Nicola Sturgeon refuses to use the powers we have to help them.

“Our plans to top up child benefit would be worth millions of pounds to families in this city, but she fails to act.”

Outside the event, a WASPI campaigner was “excited” by Sarwar’s speech and his promise to tackle inequality for women. Anne McTaggart, former MSP, described the speech as “typically outstanding”.

However, speaking to Commonspace after the launch, a Labour source criticised Sarwar’s campaign approach: “It’s sad to see this campaign try to relight pre-General Election arguments by taking the unwise position that the left of the party are nothing more than a protest mob.”

Sarwar refused all press questions after the event.

Jackie Baillie MSP said she had an enormous respect for both candidates, but believed only Sarwar could deliver a Labour government and take the fight to the SNP.

Sarwar refused all press questions after the event.

Sarwar’s only rival in the competition, Richard Leonard, launched his campaign at the City of Glasgow College on Saturday.

Kezia Dugdale stepped down from the leadership role last month after less than two years in charge.