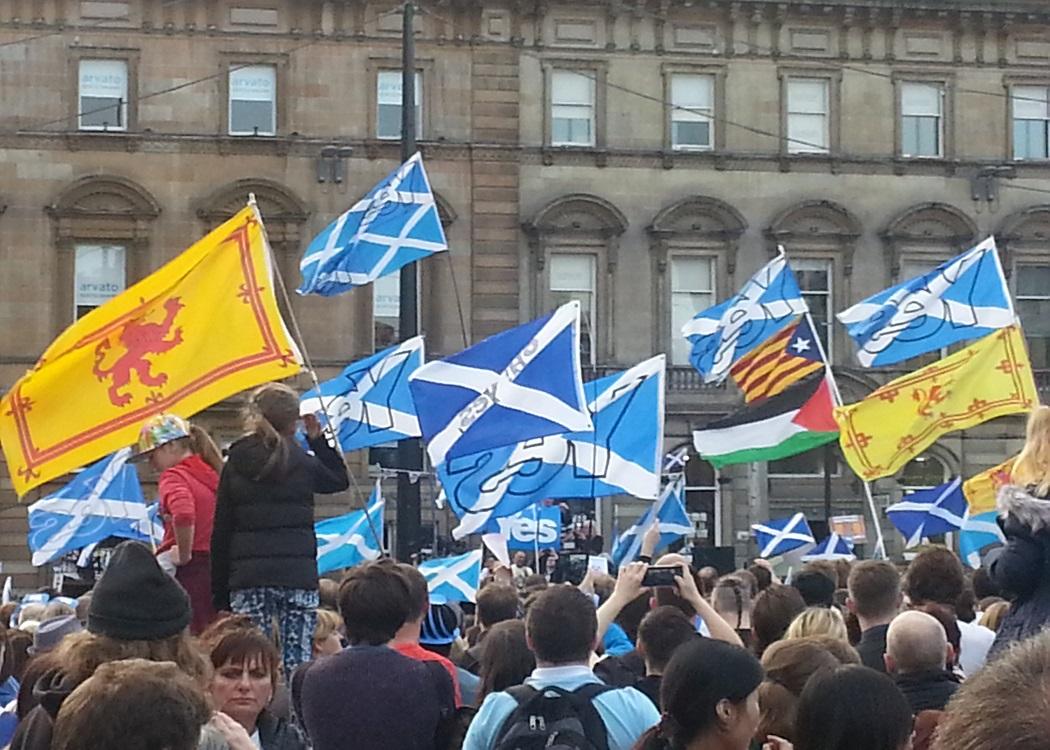 I SENT a text to my brother recently: “I’ve been thinking about this the last few days. In the Holyrood elections, let’s say Yes supporters generally vote for the SNP in constituency votes. Then let’s say they legitimately vote for a separate ‘The 45 Party’, or some such, in the regional top-up votes. Am I right in thinking that the pro-independence movement could end up with a massive majority in Parliament?”

The answer, in short, is yes. A ludicrously huge majority.

Some people might want to stop there – all I’m going to do is explain this point in a bit more detail. For everyone else, make yourselves comfortable…

The SNP’s Westminster surge has taken many by surprise, but it is at least logical. By their nature – by their name – first-past-the-post elections reward winners and punish everyone else.

There is a way to break the system. And it comes when people stop voting for a specific party and start voting for an idea.

If you’re a political party with broad support across the country, you’ll win almost nothing until you hit a tipping point, when you win virtually everything.

It’s why the Lib Dems were briefly projected to win 300 extra seats at the height of Clegg-mania. And it’s why, with 50 per cent of the vote, the SNP now has 95 per cent of Scotland’s MPs.

Holyrood’s voting system is specifically designed to avoid this. The existence of regional ‘top-up’ seats aims to even out the winner-takes-all attitude of first-past-the-post.

Depending on who you believe, the system was set up to (a) encourage a new politics of national consensus, or (b) hurt the Nationalists by ensuring the SNP never got a majority in Parliament.

When the SNP got its majority at Holyrood in 2011, Nicola Sturgeon boasted that the party had ‘broke the system’. The SNP got lucky at the margins, for sure – despite getting around 45 per cent of the vote, it ended up with a majority of MSPs.

But it didn’t break anything – Nicola Sturgeon was getting carried away. It was just a very strong performance in an electoral system that worked largely as it should.

But there is a way to break the system. And it comes when people stop voting for a specific party and start voting for an idea. And independence is a very good example of that.

Most readers will know that Holyrood’s voting system gives people two votes. Obviously you don’t have to vote for the same party both times. You can vote for one party in the constituency and another one in the region – nobody’s going to stop you.

It’s called ‘splitting your vote’; some parties, like the Greens, base their entire election strategy around it. With respect to the Greens, they got around four per cent of the vote last time round. So their vote-splitting didn’t have a seismic impact on how the system works.

However, if you took the same principle and applied it to a bigger group, like independence supporters, then the system really does break down.

Right now, people vote in huge numbers for the SNP because they’re the most obvious vehicle to push for independence. It makes sense to do that at Westminster – it’s first-past-the-post, so you gather as many people as possible and push the SNP over the finish line.

If what you care about is pushing for independence and the SNP is already riding high, then you’re getting very bad value for your second vote if you choose to vote for them again.

But at Holyrood, it makes no sense at all. Remember what I said before – if your party’s already doing well after the first round of votes, the system will penalise you in the second round.

If what you care about is pushing for independence and the SNP is already riding high, then you’re getting very bad value for your second vote if you choose to vote for them again.

There is an obvious way to increase the value of that second vote. What if there was more than one party offering what you’re after? Let’s say there was a completely separate, single-issue pro-independence party – let’s call them ‘The 45’ party – standing only on the regional lists as a postbox for your second vote. What would happen then?

Unfortunately that’s where we have to stop, because there haven’t been any elections recently and we don’t have the data to… what’s that? Really?!

It turns out there was a UK-wide General Election only weeks ago. So we may as well crack on. I was curious to check how last week’s vote would look if the results were transferred to Holyrood.

I was also keen to test my theory above – would the pro-independence side get more seats if they split their votes across two parties? So I’ve funnelled last week’s results into a model of the Holyrood voting system to find out.

Now, there are a couple of caveats here. The seven regions of the Scottish Parliament are an exact fit with Holyrood’s 73 constituencies. But they’re only around a 90 per cent match for the 59 Westminster ones (damn you, Boundary Commission).

Second, smaller parties like the Greens do worse in Westminster elections – people are less likely to vote for them because they’re never going to win. And SNP voters have different motivations, so many would not split their vote to support independence in this way. Nicola Sturgeon, to give one example.

Therefore these figures illustrate a wider point, but the exact numbers shouldn’t be taken too seriously.

What if there was a completely separate, single-issue pro-independence party standing only on the regional lists as a postbox for your second vote. What would happen then?

With those disclaimers in mind, let’s use two examples. Assuming that SNP voters at Westminster stick with them next year at Holyrood, let’s see what would happen if half of them chose to use their second vote at Holyrood for this mythical ’45’ party. Then let’s see what would happen if they all did it. Just for statistics-based psephological fun – always the best kind.

The results set out below would be dramatic.

2015 Westminster results, transferred to Holyrood (bearing in mind the above caveats)

2011 Holyrood results, if half of SNP voters backed a separate pro-independence party in the regional lists

2011 Holyrood results, if all SNP voters backed a separate pro-independence party in the regional lists

If all of Thursday’s votes were transferred directly to Holyrood, the SNP would end up with around 73 seats – virtually all the constituencies and a smattering of top up seats.

However, if half of SNP voters ‘split’ their second votes, it would create a pro-independence bloc of 93 MSPs – almost three-quarters of the Parliament.That’s 20 extra pro-indy seats with zero extra pro-indy votes.

More fancifully, if every SNP supporter split their vote in this way then the pro-independence bloc would be a simply ridiculous 104 of Holyrood’s 129 seats.

Nicola Sturgeon is in a tricky position – she has a duty to respect the 55 per cent of people who rejected independence, many of whom never want a referendum again.

Even if you used the last actual Scottish election as an example – where the SNP didn’t perform as well, but the election boundaries are an exact fit – you get a similar effect.

If half of SNP voters used their second vote on another party, there would have been an 80-strong pro-independence contingent – almost two-thirds of the Parliament. If everyone had done it, that number jumps to 95.

Anything from 80 to 104 MSPs. The pro-independence side could hold up to four-fifths of the Scottish Parliament without gaining a single extra supporter – just by making more efficient use of the ones they already have.

I didn’t think about this because I’m an independence fanatic – I’m pretty agnostic on the issue. The reason I started thinking about this is because I think it might happen anyway. Perhaps not on the scale suggested above, but enough to shift the dynamics at Holyrood.

Nicola Sturgeon is in a tricky position – as first minister, she has a duty to respect the 55 per cent of people who rejected independence, many of whom never want a referendum again.

This is balanced against keeping the 100,000-plus members of her party happy; most of whom only joined this year, many seeking a second referendum as soon as possible.

She can dance around the issue for a while, maybe even until the 2016 manifestoes, but something’s got to give and I’m guessing it’ll be the second referendum. Assuming I’m right, then the fundamentalists in the Yes campaign are not going to be happy.

On some level the SNP ceding voters to a group like this may even work for Nicola Sturgeon – providing a pressure valve and making her balancing act less tricky.

On some level the SNP ceding voters to a group like this may even work for Nicola Sturgeon – providing a pressure valve and making her balancing act less tricky. She can be the moderate face of independence while others represent the radical end.

Obviously not all positive, though. Dare I say it, a more strident grouping could even hold her feet to the fire on independence from time to time.

It would give the SNP plenty to think about. It would also give Unionists an enormous dilemma to grapple with – the political ramifications for them would be painful.

So this isn’t the start of a campaign. It just looks like the end result of something that – to me – looks very likely to happen regardless.