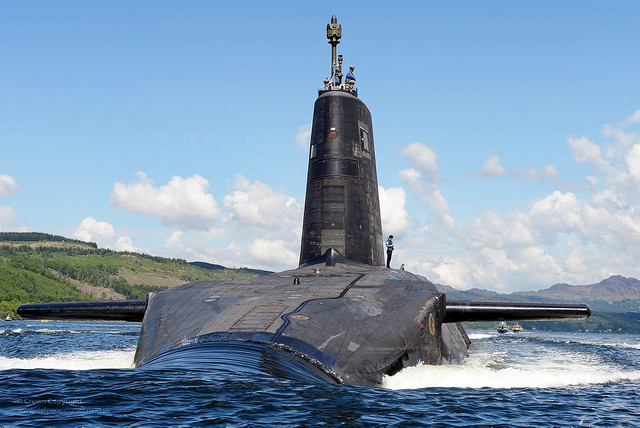 Andrew Smith, spokesperson for Campaign Against Arms Trade (@CAATUK), says Glasgow’s hosting of the Underwater Defence Technology Conference on 26 June betrays previous sentiment from Glasgow City Council in support of peace, and calls on Glaswegians to join the protest against it

IN AUGUST 2014 Glasgow City Council hit the headlines for its bold decision to fly the Palestinian flag in solidarity with those affected by the terrible Israeli bombardment that was taking place.

“I would like to convey my most sincere condolences to the many in your city and throughout Palestine,” the then Lord Provost, Sadie Docherty, wrote to her counterpart in Bethlehem. “Please be assured that our thoughts are with you and we are hopeful that an immediate, enduring and peaceful resolution can be found to this conflict.”

Over 2000 Palestinians were killed that month in a brutal bombardment that was condemned by the United Nations, and destroyed vital infrastructure all across Gaza.

It is four years later, and the same Council will be hosting companies that have profited from the same kind of war and conflict that councillors were protesting against.

This month the SEC in Glasgow will be hosting Undersea Defence Technology 2018 (UDT), an arms fair and conference dedicated to the promotion of military and naval strength and weaponry. It will bring representatives of some of the world’s biggest arms companies together with delegates from around the world.

Over 100 companies will be displaying their wares. One of those, DSIT solutions, is part-owned by the Israeli state and will be promoting equipment used to monitor the Gaza sea border as part of the ongoing occupation.

Sponsors include BAE Systems, which produces the same Eurofighter jets that are being used by Saudi forces in Yemen and Leonardo, which has been linked to arms being used by Turkish forces in Afrin. The event’s ‘innovation partner’ is Babcock, which has major contracts for the production and maintenance of Trident on the Clyde.

Delegates will hear speeches from military figures and arms company reps. They include speakers from Thales, a French arms company that has armed regimes in Saudi Arabia, Kazakhstan and Azerbaijan, and Raytheon, which makes missiles that have been used by Israeli forces in Gaza and Saudi forces in Yemen.

None of this could be happening without help from the Council. The SEC building itself is 90 per cent owned by the Council, and the event is being ‘supported’ by Glasgow Life, which ‘delivers services on behalf of Glasgow City Council.’ Despite the anger that has been caused, Glasgow City Council has consistently defended its association with the controversial event.

The Council has insisted that arms sales and trident will not feature on the agenda. However, as CommonSpace has uncovered, one session, advertised on the event website, will see speakers from BAE Systems Maritime Services, Atlas Elektronik UK and the UK Ministry of Defence discuss a paper on ‘meeting tomorrow’s requirement for submarine underwater weapons’.

None of this has needed to happen. It’s not as if the Council didn’t have a ready-made get-out clause. It was November 2016 when the then Labour-run Council made a bid to host UDT which was a life-time ago in Glaswegian politics. In the time since there has been a change of administration, but, regardless of which party has been running the City Chambers, its support has been unwavering.

The slogan of Glasgow Life is ‘People Make Glasgow’ and the people of the city haven’t been so easily convinced. Glasgow has a long and proud tradition of opposition to nuclear weapons and war, and, unsurprisingly, UDT will be met by widespread protests. A major rally will take place outside the event venue on 26 June at 10am.

The campaign is being organised by the Sink the Arms Fair coalition. The groups involved include Scottish Campaign for Nuclear Disarmament, Scotland Against Militarism, Campaign Against Arms Trade, Scottish Palestine Solidarity Campaign, Food Not Bombs and others.

We will be joined by campaigners from across the political spectrum. We will be there to send the message loudly and clearly that the people of Scotland want to sink UDT and end council support for the arms industry.