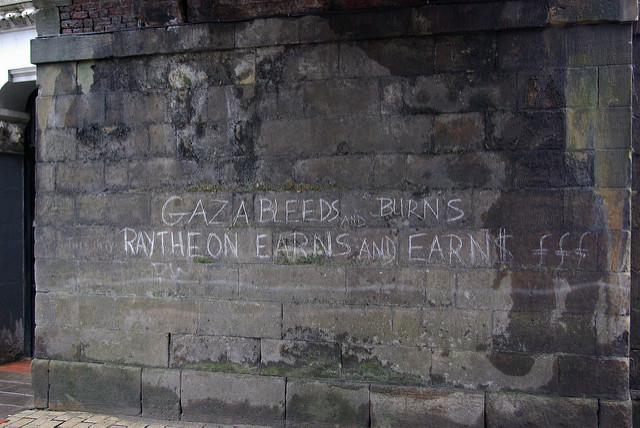 THE NEWS that a Scottish Government Minister met with the world’s fourth biggest arms company, Raytheon, took many by surprise. So did the fact that the same company has been given almost £200,000 worth of grants from Scottish Enterprise.

The surprise was even greater when factoring in that Raytheon makes the Paveway missile guidance equipment that Saudi forces are using in the devastating bombardment of Yemen. In fact, much of the equipment is made in the factory that the Business Minister, Paul Wheelhouse, visited.

SNP politicians and members have been among the strongest critics of the terrible war and Downing Street’s appalling complicity in it. The party has consistently called for an end to arms sales to the Saudi regime and a tougher approach to arms export regulations more generally.

Despite the criticism the war has received from the SNP in both parliaments, there’s little doubt that Raytheon wants a strong relationship with Holyrood. According to the Sunday Mail, which broke the story, the “key request” from the company was to “address the need for support” from the Scottish Government. With that in mind, it’s no surprise that it asked to publicise the meeting with photos (which Wheelhouse refused).

This is not the first time that the Scottish Government has been criticised for supporting the arms industry. Last December, another government minister hosted a reception on behalf of the ADS Group, a trade body for arms companies, in the Scottish Parliament.

The Scottish Government has been quick to defend itself, pointing out that the meeting and the money given to Raytheon was in order to help to “diversify the site into more non-defence related activities.” It’s hard to know exactly what part of Raytheon’s production the Scottish Enterprise grants were meant to aid, as the relevant details on the Sunday Mail’s FoIs were redacted.

In any case, there is no question that Raytheon’s profits come overwhelmingly from arms sales. Analysis from the Stockholm International Peace Research Institute shows that 95% of its annual sales come from military equipment. It made $28 billion last year, so, even if every penny was to promote diversification, Holyrood’s grant is unlikely to have altered the company’s strategy.

In some respects the objectives of the grants are almost immaterial. Even if all of the money was being used solely for the promotion of civil engineering and non-military projects, it still stands to  benefit a company that actively fuels and profits from war, conflict and instability around the world.

READ MORE: Analysis: Why Britain backs the bombing of Yemen and what it means for Scotland

Public money and the levers of government should not be used to boost the profits of companies that have caused as much death and destruction as Raytheon. It is not just another engineering company – it is one of the world’s biggest arms companies. It is an active participant in some of the most devastating warzones in the world. It has played a central role in the oppression of Palestinians and destruction of Yemen. Scottish Enterprise should not be funding its work.

The revelations about the meeting and the grants were branded “deeply disturbing” by the Scottish Labour leader, Richard Leonard, who accused the SNP of “saying one thing in opposition at Westminster but doing the opposite at Holyrood.”

Many have responded by accusing Labour of hypocrisy. This is not least because the Labour-controlled Welsh Government recently gave Raytheon a grant of £407,000 to establish a military-production site in Broughton, Wales.

It is also no secret that previous UK Labour governments have offered huge levels of support to arms companies, and have sold billions of pounds worth of arms to repressive regimes across the world. This is all true, and shameful. But it definitely doesn’t invalidate their criticisms in this case.

One outcome of the party-political nature of the coverage is that it has avoided the far more serious point: that support for the arms trade is not just a party-political issue, it’s an institutional one. Arms company executives may have individual political preferences, but they will try to work with whoever is in power, and will put a great deal of resources into trying to influence politicians and governments at all levels.

All across UK politics, the influence of this network of relationships has helped to shift government priorities in favour of private commercial interests and led to the public interest becoming conflated with corporate interests. This has given arms companies a totally disproportionate voice in the corridors of power.

That was evident in May this year, when the SNP-run Glasgow City Council’s sponsored the Undersea Defence Technology arms fair. The agreement had been made by the previous Labour administration, underlining the institutional issue and the need for wider reform.

One point that Wheelhouse and his colleagues are totally right about is the need for diversification and encouraging an alternative to arms trade jobs. The arms trade may be a very small employer on a national basis (with arms exports accounting for 0.2% of jobs in the UK), but in some parts of the country (such as Glenrothes) it is a major employer. This must be seen as a priority for all people that oppose arms exports and militarism.

If arms sales to repressive regimes were to be reduced (or even better, to end) then it will need people from all parties and levels of government to work together to promote alternative employment. This isn’t only important from the perspective of declining jobs in the arms industry, but also to offer up a real alternative and the promotion of companies and sectors that are not involved in the production of weapons.

One contribution to the debate came in 2015, when Campaign Against Arms Trade published a report focused on how the right kind of investment could help the Clyde to transition into a global leader in wave and tidal technology. However, as welcome as this kind of change would be, it can only happen with fundamental support from Westminster and Holyrood.

In 2017 the Trade Union Congress passed a motion calling for the setup of a Shadow Defence Diversification Agency, with a view to a future Labour government using it as part of its industrial policy. This is the sort of initiative that can and should be explored across the UK, including the devolved parliaments.

If there is to be a positive outcome to this scandal then it must be that the Scottish Government works with opposition parties to promote alternatives, and ensure that no more public money goes to arms companies like Raytheon. The Scottish Parliament has the chance to act. It must set a vital precedent across the UK by sending the message loudly and cleanly that war profiteers are not welcome in the corridors of power.

Andrew Smith is a spokesperson for Campaign Against Arms Trade (CAAT). You can follow CAAT at @CAATuk.

Picture courtesy of Will Bakker