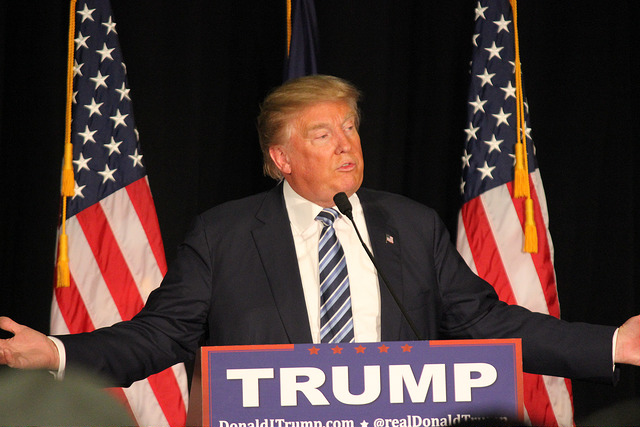 CommonSpace reader Andy Crow gives his take on Donald Trump as part of our special week of coverage on Defeating Global Trumpism. Got an opinion? Email it in to ben@common.scot

WHAT needs I think to be remembered is that Trumpism doesn’t really exist.  It ended when the presidential campaign ended.

The Trump campaign was about fixing the roof at home and ‘making America great’.  It was about fixing a broken state infrastructure and resuscitating US industry and this was what the blue collar workers (black or white, but mostly white) were interested in.  They wanted some ‘jobs’ back.  They don’t really want jobs, they want a respectable income, but ‘the job’ is the only acceptable route to that at present except for the well educated and well connected wealthy.  (The Job Guarantee programme plays to that constituency even though what is really needed is the wholesale reconsideration of the relationship of money to work that a Universal Basic Income could provide,  but that is for the birds at present and not central to ‘Trump-ism’.)

What probably swung the election was the promise of more attention at home; the domestic economy and less foreign intervention in American manufactured wars, or as ‘international peacekeeping’ as they are usually branded.  Intelligent Americans know the difference between peacekeeping actions and oil wars.  Trump is known to have been against foreign interventions in the past.  Hillary Clinton as Secretary of State was heavily committed to foreign interventions and ‘promised’ more of the same.  I reckon enough centrist educated voters thought Trump might be disruptive enough to deliver some of that change of focus under the heading ‘Draining the Swamp’.

Once it was obvious he was going to be POTUS, the CIA lead the charge of the deep state on ‘Russiagate’. Why? Because Trump on the stump said he’d go and see Putin and have a chat and a bottle of beer, as man to man, and that would have demolished the post cold war military stand-off.

Trump and Putin would get on like a house on fire. That had to be stopped. And the tension cranked-up. It was.

I think Trump really did agonise over the Paris Climate accord.  And caved in to pressure to not sign it.  Obama did exactly the same at Copenhagen, except he didn’t appear to agonise he just walked in late and blew the whole conference out of the water.

Trumps tax cuts were the last and biggest signifier.  Trump promised tax cuts for working people and was totally outmanoeuvred into introducing tax reforms for the wealthy and corporate America.  Whether he knew that was what he was signing up to I don’t know.  But he’s not bright so he might have thought the reforms would do what he wanted, but either way he signed a blank government ‘cheque’ as required.

He no longer has his own advisors and cabinet.  He’s totally ‘captured’.  He’s now fully on board as deep state mouthpiece and ‘Trumpism’ is a mask for that underlying fascist or proto-fascist regime.

He had an alternative.  He could have joined Lincoln and Kennedy and gone down in the annals as a great president.  But he would have had to have beliefs to risk that.  And he doesn’t.  The establishment is actually too comfortable for him.  He’s at home in the Swamp now.

That’s how I see it.