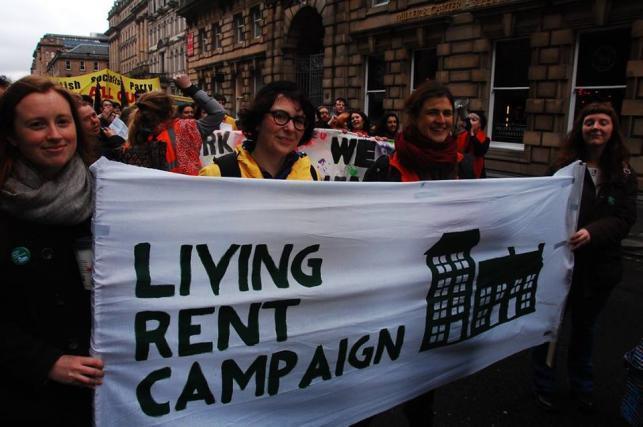 THE SCOTTISH GOVERNMENT has been urged to take action to close a loophole which allows landlords to class their properties as Airbnb-style ‘holiday lets’ and escape regulation, and to launch an investigation into “illegal practices” this loophole may have permitted.

These calls have been prompted by the publication of a new report by the Living Rent tenants’ union, which claims: “These holiday let leases afford tenants almost none of the protections tenants would be guaranteed under Short-Assured Tenancies or Scottish Private Residential Tenancies; neither landlords nor agencies operating on their behalf need to register; properties are exempt from HMO licensing; tenants aren’t entitled to third-party protection of their deposits; the properties are not subject to the same standards in terms of fire safety and repairs; and it is significantly easier to evict someone from a holiday let.”

The report follows First Minister Nicola Sturgeon’s announcement at the SNP’s conference in Edinburgh last week that a consultation into holiday lets would take place. However, Living Rent have argued that the Scottish Government could close the loophole which holiday let landlords can exploit without new legislation, and have urged the government not to wait until the consultation has concluded to take action.

The report details accounts from a tenant of the Edinburgh landlord Mark Fortune, who in 2013 was barred from the landlord register, making it a criminal offence for him to rent out property in the capital, after councillors were told that he had been convicted of offences included an incident in March 2011 where he was fined £1,000 for operating an unlicensed House in Multiple Occupation (HMO), and September 2011 where he was fined £650 for threatening tenants.

However, the report claims that Fortune owns approximately 70 properties which are let to tenants on monthly deals without formal tenancy agreements, because landlords of holiday and party lets are exempt from the landlord register.

Megan Bishop, from Living Rent and co-author of the report, said: “It’s abysmal how tenants are being treated. We’ve had cases from tenants living in properties in such extreme disrepair it’s threatening their health and safety.

“We welcome the Scottish Government’s consultation on holiday lets, but if they are serious about protecting tenants, they need take action now close this loophole and drastically step up regulation and ensure tenants are safe.”

“While I welcome the Scottish Government’s belated consultation on a regulatory framework for short-term lets, the tenants featured in this report are not holidaymakers but folk desperate for a place to call home.” Green MSP Andy Wightman

Speaking to CommonSpace, Green MSP Andy Wightman commented: “This report reveals some truly shocking stories about the way desperate tenants are being treated by rogue landlords who are letting uninhabitable properties and acting beyond the law.

“While I welcome the Scottish Government’s belated consultation on a regulatory framework for short-term lets, the tenants featured in this report are not holidaymakers but folk desperate for a place to call home. An urgent investigation is required to root out these illegal practices.”

Dr Craig Dalzell, head of policy and research at the Common Weal think tank, also commented: “It is clear that legislation has been falling behind the state of “innovation” in the housing sector. The Scottish Government must catch up as soon as possible. Abuse of tenancy law in this fashion is putting tenants at risk and so these loopholes must be closed.

“We’ve welcomed recent statements encouraging greater regulation of short-term lets and business models such as those used by AirBnB but there is still some way to go. Wholesale reform of the rental housing sector is becoming increasingly urgent but this problem in particular seems to be one which could be addressed without contention.”