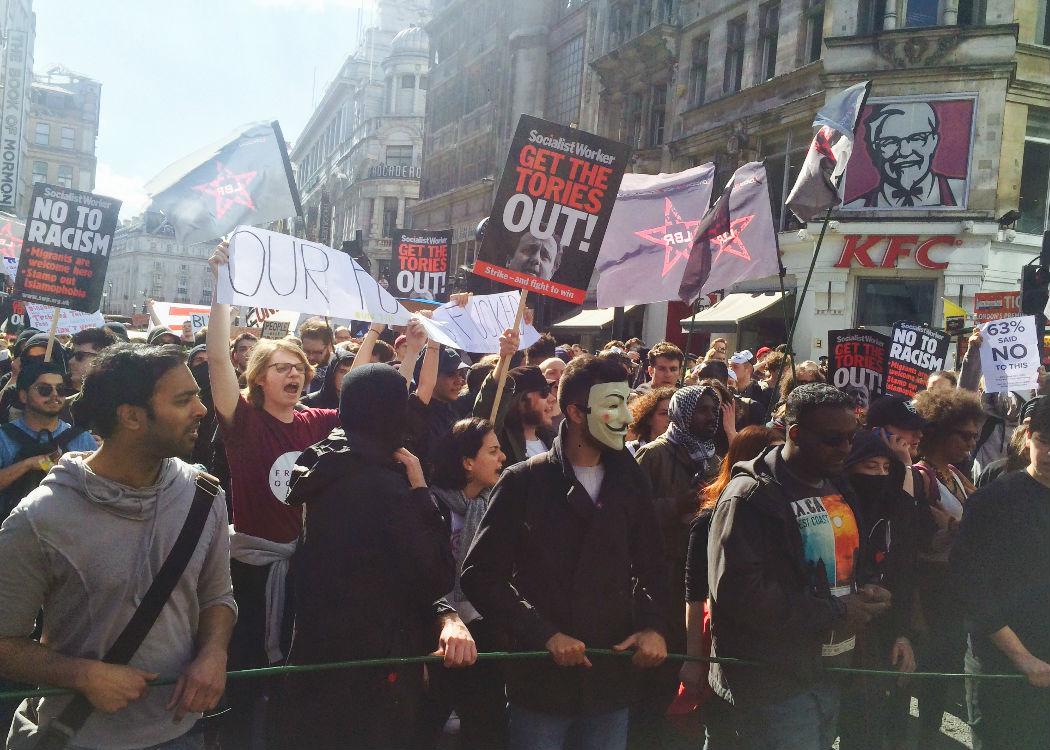 THE YOUNG, the angry, the disenfranchised. Thousands came from all corners of London to make their voices heard.

This was an impassioned response to an unexpected election result.

Organised in a matter of hours on social media, primarily by group London Black Revolutionaries, the protesters wanted to send a message that the newly-elected Conservative government would face opposition to the next inevitable wave of austerity measures.

“The Conservatives only got a small proportion of the vote and what they plan to do is disgraceful,” said Shelley Asquith, president of the University Arts London (UAL) students union, who was on the march.

“Shame on you” shouted the protesters as one young man was pinned to the floor.

“They want to implement a whole range of policies that will adversely affect working class people, including students. You can expect action to make it as difficult a term as possible for this government and hopefully we can stop them carrying out the full five years.”

“I’m here because I’m against what this government is standing for,” said care worker Yasin Mudey.

“Now it’s a Tory majority the austerity programme is definitely going to be accelerated in the next five years and people are out today to oppose that.”

Marching through central London, the anti-austerity protesters were met by a throng of of Metropolitan Police with riot gear.

As the demonstration neared Downing Street, the pace quickened and the chants loudened.

Upon arriving outside the prime minister’s residence some began to shake the railings erected on the pavement. Police responded by brandishing batons and grabbing at protesters in the crowd.

The police numbers grew rapidly and they closed in on the protesters in an attempt to ‘kettle’ them. But the London youth seemed savvy to such tactics and managed to evade the officers who, by this point, were screaming frantically and pushing anyone within reach to the ground.

“Shame on you” shouted the protesters as one young man was pinned to the floor. Smoke bombs went off causing confusion among the police as a traffic cone was thrown in their direction.

In total, 17 arrests were made. Protesters said the police’s intimidatory tactics were symptomatic of a wider clampdown on dissent.

This time police came in more aggressively than before as protesters and passers by were caught up in a police charge that eventually led to several arrests, the kettling of a hundred or so and the scattering of others.

In an immediate and spontaneous reaction, the kettled youth erupted in music and dance and began to rave inside the tight lines of the Met forces. The police stared on, batons at the ready.

In total, 17 arrests were made. Protesters said the police’s intimidatory tactics were symptomatic of a wider clampdown on dissent.

“The police’s conduct today was a symbol of what the government wants to do to anyone that speaks out,” said Asquith. “They’re already trying to silence us, arrest us and intimidate us. I hope that it won’t work and people will still come out in the next few weeks, months and years to show their discontent.”

So, a new Tory government, a new wave of protests. Tens of thousands are expected to take to assemble at the Bank of England on June 20 in a demonstration organised by the People’s Assembly Against Austerity.

Here in London, the potent combination of a disillusionment with the political system and a real sense of injustice at police tactics make further escalation seem inevitable. Michael Gove’s appointment as the new justice secretary is unlikely to help matters.

Now the Conservatives have the shackles of a coalition off their backs, people in the capital, and indeed across the UK, are fearful of what’s next for public services, for education, for society.

Buckle in, this is going to be a bumpy ride.