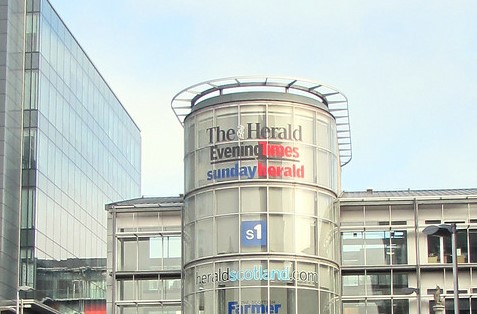 National Union of Journalists members at Newsquest vote in favour of industrial action by 86.7 per cent after nine staffers at the Herald and its sister titles volunteer for redundancy

NEWSQUEST, the Glasgow-based publisher of the Herald newspaper and sister titles including the National, is facing potential industrial action from staff following an overwhelming vote in favour of a strike by National Union of Journalist members.

NUJ first informed Newsquest of the ballot on 21 November after the employer announced that it would be forced to make dismissals if cuts of approximately £500,000 could not be made by other means. Newsquest Scotland editor-in-chief Donald Martin subsequently appealed to staff for voluntary redundancies in order to prevent compulsory job losses.

It was confirmed today [10 December] that nine members of staff at Newsquest – which publishes the Herald, the Herald on Sunday, the National, the Sunday National and the recently relaunched Glasgow Times (formerly the Evening Times) responded to Martin’s plea by volunteering for redundancy, including the Herald’s chief reporter David Leask and social affairs correspondent Stephen Naysmith.

Severin is quite right. A number of reporters, writers and editors are leaving The Herald at the end of the year. I’m one of them – I’m going freelance and will still be doing some work for The Herald. https://t.co/bcv6amenNu

In addition to Leask and Naysmith, an assistant editor, the head of sport, the chief sports writer, two senior feature writers, a subeditor and a business correspondent are also expected to leave in the next six weeks.

Shortly after this was confirmed on social media by several of the journalists in question, NUJ Scotland announced that 86.7 per cent of union members at Newsquest supported strike action in a ballot with a 61 per cent turnout. While there is, as yet, no industrial action confirmed, its likelihood has been raised by this result.

In addition to the redundancies, the ballot was also provoked by a series of planned structural changes revealed earlier this year by Newsquest management, which Newsquest NUJ members have argued would have a detrimental effect upon the quality of their work, health and family lives.

Prior to these planned changes being announced, an NUJ stress survey amongst Newsquest staff revealed that 83 per cent of respondents believed the quality of their respective titles had declined over the last year, while 78 per cent said their workloads have increased over the same period, 57 per cent said they are pressured to produce work faster than they are comfortable with, and just 9 per cent said they had confidence in current management.

“Such a firm vote in favour of industrial action demonstrates the strength of feeling among our members faced by yet another round of jobs cuts, and the increased workloads that reduced staffing levels bring.” NUJ Scotland organiser John Toner

Commenting on the results of the ballot, NUJ Scotland organiser John Toner said: “Such a firm vote in favour of industrial action demonstrates the strength of feeling among our members faced by yet another round of jobs cuts, and the increased workloads that reduced staffing levels bring.

“We have already begun constructive talks with Newsquest management, and we are confident that these will continue. I am in no doubt that the employer will take on board the anger and frustration that have been expressed through this ballot.”

Speaking to CommonSpace, a Newsquest Scotland spokesman said: “Whilst we are disappointed that NUJ members are contemplating industrial action, constructive dialogue is ongoing with both the Union and staff.”

In a memo seen by industry publication Hold the Front Page, Donald Martin wrote: “Although I will be very sad to lose such a wealth of talent and experience, I much appreciate the gesture they have made as it means we are making significant progress towards achieving the savings required.”

READ MORE: NUJ condemns ‘the targeting of those who seek out the truth’ following Northern Ireland journalist arrests

According to the memo, all but one of the departing staffers will leave on 31 December. Martin is now reportedly inviting applications from within the organisation to help fill vacant roles and further stave off the possibility of compulsory redundancies.

These latest developments follow a decade of successive cuts to staffing levels with almost no increase in wages at Newsquest titles, where the NUJ claims staff are “already stretched and stressed after years of cost-cutting and simply will not tolerate it any longer.”

On 29 November, the union condemned further cuts announced by Newsquest in the run-up to Christmas at local papers in Cumbria and Darlington.

Speaking at the time, Newsquest NUJ group chapel coordinator Chris Morley said: “Yet again, as we approach Christmas as the season of goodwill, the ghost of Scroogequest looms large for journalists within Newsquest. Haunted by low pay and relentless workloads that produce unsafe levels of stress for its journalists, the company is yet again recklessly picking off editorial workers seemingly at will at the hardest possible time to be made redundant.

“Many of the workers being cast aside are crucial to the output of their titles and associated websites and colleagues find it difficult to understand how any semblance of quality can be maintained once they leave. The job losses are most often older, more experienced staff whose local knowledge and invaluable experience are being lost to the detriment of their local communities.

“We challenge Newsquest to show that it is safe to make these cuts and will not pose a risk to the health of those expected to pick up the pieces. We think this is no way to run a company that is reputed to be in pole position to acquire a big rival with all the responsibility that will entail to the state of UK journalism.”

Over the past year, concern of job losses within journalism has stretched beyond Newsquest to its US parent company Gannett, which in August was bought out by newspaper publisher GateHouse in a deal reportedly worth $1.4 billion (£1.1 billion), leaving both Gatehouse and Gannett managed by the private equity firm Fortress through 2021.

Following the completion of the merger, the crowd-sourced media website Poynter published a tally of subsequent layoffs at Gannett titles, which as of 9 December came to 215 jobs. Confirmation has been difficult however, as Gannett have been accused of forcing departing staff to sign non-disclosure agreements in order to receive their severance.