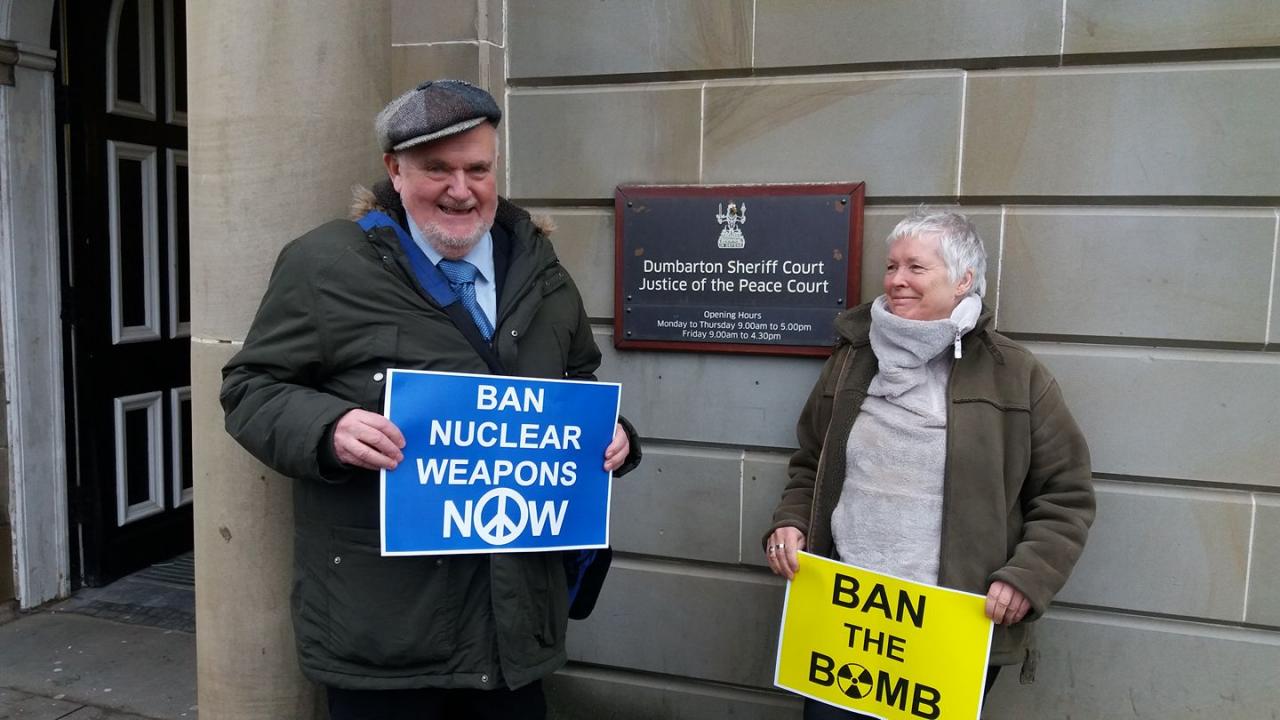 Protestors pledge to continue resistance to UK weapons in Scotland

ANGIE ZELTER, one of two anti-nuclear weapons protestors arrested and then remanded in custody for refusing to end their anti-Trident activities will challenge her bail conditions in court today (Tuesday 25 July).

Zelter, 66 and Scottish CND veteran Brian Quail , 79, were arrested on 12 July for laying down on a road at Coulport – a depot that services the Faslane base on the Clyde, which houses the UK’s store of Trident nuclear submarines. They refused to sign up to bail conditions that would mean they were not allowed to return to within 100 meters of protest sites at Faslane and Coulport.

The weapons are subject to a new UN ban treaty established with the support of the majority of the world’s nations on 7 July. The discussions for the, treaty which will come into effect in September, were boycotted by an isolated UK Government and a handful of nuclear states.

“The new global norm of not possessing, deploying or using nuclear weapons makes clear that the nine nuclear weapons States – including the UK – are out of step with the rest of the world.” Angie Zelter

Zelter, whose appeal against her bail conditions will be heard at the Sheriff Appeal Court in Edinburgh today, said: ”Right since Trident Ploughshares was launched in 1998 members of Trident Ploughshares have stood up in Court and argued that Trident is illegal because it is an inherently indiscriminate weapon, the use of which would inevitably cause the deaths of at least hundreds of thousands if not millions of civilians.  At times the courts have listened to those arguments.  At other times they have not.

“Now the United Nations has adopted a Treaty that will ban nuclear weapons  for the very reasons so many of us have for so long taken action, and gone to prison – because of  the unacceptable humanitarian consequences of any use of nuclear weapons.  The new global norm of not possessing, deploying or using nuclear weapons makes clear that the nine nuclear weapons States – including the UK – are out of step with the rest of the world.

“So at this time it is even more important that we stand at the gates of the places where those weapons are held and demand that the government listen to the majority world and start the process of disarmament now.

We welcome support from all those who stand with us and for disarmament, and we will take our arguments  to every court, government body, and high street, until the UK ­ and the world is rid of these terrible weapons.”

The UN nuclear weapons ban has brought new impetus to protests at sites like Faslane and Coulport, which have been sites of dissent for decades.

A total of nine people from the Trident Ploughshares group were arrested during the eight day camp near Coulport, which ended on 16 July.

The UK’s nuclear weapons system now faces a critical juncture, as the ban coincides with attempts to renew the weapons at an estimated cost of $205bn and with growing opposition in mainstream politics – including from the SNP and Labour leader Jeremy Corbyn.

Quail, who will face trial along with Zelter on 18 October for participating in the blockade said: “We acted because of the manifest illegality of Trident. As the weapon of mass destruction ne plus ultra, it unquestionably belongs to the class of prohibited weaponry. Our action took place two days after 122 states in the United Nations agreed a draft treaty banning nuclear weapons. This closes the gap in law whereby chemical and biological weapons are banned by international agreement while nuclear weapons have not specifically been dealt with.”

“Britain and the other rogue states boycotted the process. The UK claim to support multilateral nuclear disarmament, but has turned it’s back on this multilateral disarmament process. We hope our witness will call attention to these facts and inspire others to take action to resist the ongoing deployment of Trident.”