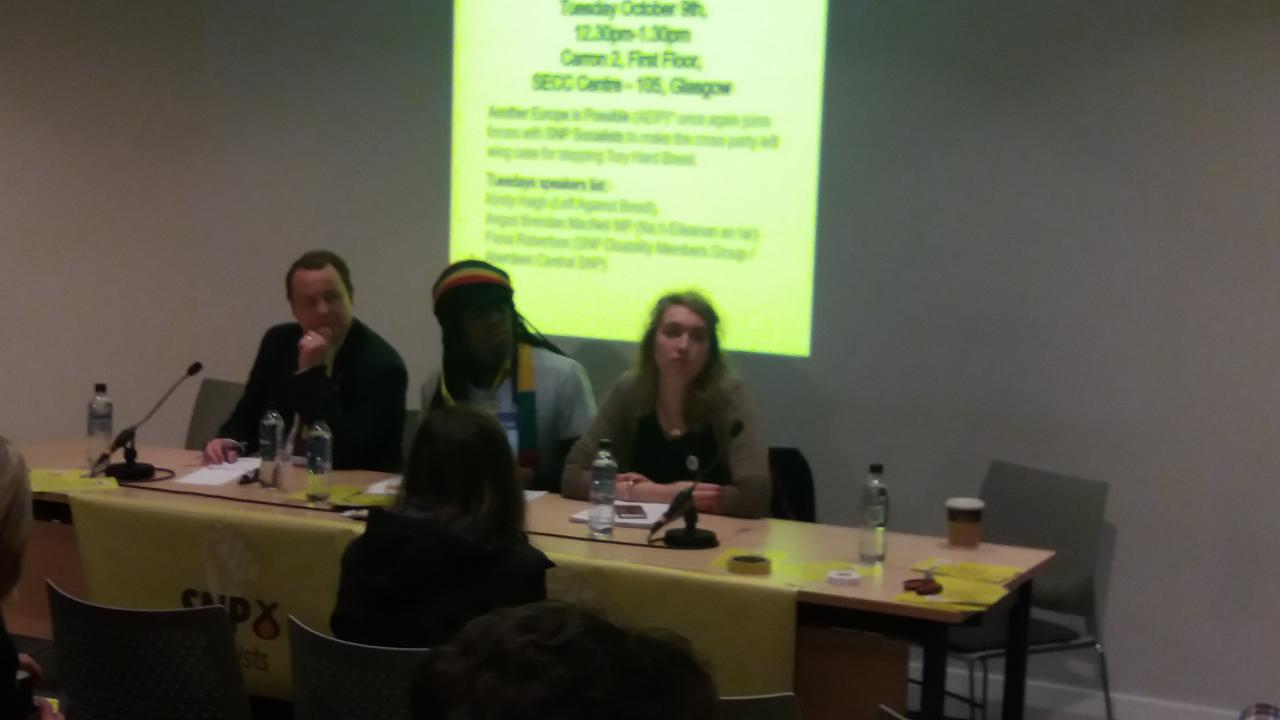 The SNP conference saw calls for cross-party, left-wing unity in support of a People’s Vote, with activist Kirsty Haigh dismissing the possibility of ‘Lexit’ as a “fantasy”

SNP SOCIALISTS have joined with representatives of the ‘Another Europe is Possible’ campaign to articulate a socialist case for EU membership and advocating a People’s Vote.

This follows promises from SNP Westminster leader Ian Blackford at this week’s party conference that SNP MPs will engage in “maximum disruption” of the Brexit process, as well as recent indications by First Minister Nicola Sturgeon that the SNP is warming in its support for a second referendum on EU membership.

Addressing delegates at the SNP Socialists’ Fringe meeting in Glasgow on Tuesday, Glasgow SNP councillor Graham Campbell argued: “There is a socialist case for staying in the EU and to fight against what Brexit has to offer us.”

Despite division within the Labour Party over EU membership – which remained unresolved during the party’s recent UK conference – and an increasing advocacy among some members of a so-called ‘Lexit’, or left-wing Brexit, Campbell said that there was a basis for grassroots activists to “work together on something so fundamentally important as international solidarity and workers against a Tory Brexit.”

Scottish activist Kirsty Haigh, speaking on behalf of the left-wing, non-party anti-Brexit campaign ‘Another Europe is Possible’, which jointly hosted the meeting alongside the SNP Socialists group, explained the rationale behind the organisation, saying: “We’re the left-wing campaign group against Brexit, trying to fight it from a socialist perspective and make it clear that this [a second vote] can happen.

“The closer we get [to Brexit], the clearer it becomes that Brexit is a Tory attempt to deregulate the economy and allow bosses to cash in. It really is an all-out fundamental attack on our rights and freedoms as working-class people.” Another Europe Is Possible activist Kirsty Haigh

“The closer we get [to Brexit], the clearer it becomes that Brexit is a Tory attempt to deregulate the economy and allow bosses to cash in. It really is an all-out fundamental attack on our rights and freedoms as working-class people. It’s a recipe for entrenched austerity, the consequences of which will mean our local services, child poverty and unemployment will all worsen.

“But it’s not just about the economy: Tory Brexit is an attack on workers and migrants. We would lose any say over EU rules, but we would still have to live with them – it’s the complete opposite of taking back control. We’ll spend our time fighting what’s going on with the EU, instead of the bold and radical politics that we should be fighting for. We think only by holding and winning a vote on the terms of this deal can we move on from the mess of the Brexit process, and get on with building a better society.”

Explaining her perspective on the European Union and the way it has often been discussed in British left-wing discourse, Haigh continued: “I don’t think the EU is perfect – far from it. But we can still implement a radical manifesto while being a part of it. When we look at the history of the EU, many of its most right-wing policies were ones that were pushed through by the UK, so the idea that by leaving the EU, we will become inherently more left-wing just doesn’t make sense at all. We’re a country that currently, despite having lots of good policies, are fundamentally managed by the Tory government down south, and that’s what we need to put a stop to.

“There are a lot of people who say that EU competition law would stop us from putting in place these radical policies that we want, but it’s just not true; we can look at examples of policies we could still implement. Most European companies have state-owned railways, with ours being the exception, not the rule. In fact, most of our rail franchises are owned by other European state-owned railways, so there’s no reason we couldn’t be in the EU and have a nationalised rail service.

“With our utilities, networks can be publicly-owned and decentralised – this is the situation in many other EU countries. On workers’ rights, EU employment law is backbone of many of the UK’s essential workplace rights, such as equal pay and the protection of part-time workers. The Tories are on record as saying they see Brexit as a route to ripping up workers’ rights and many of the human rights laws that exist.

During his interview with Scottish Brexit minister Mike Russell at the SNP conference on 9 October, CommonSpace questioned Russell about whether the People’s Vote is a manifestation of the establishment and the British state – a view refuted by Haigh: “Ours isn’t a campaign for the status quo – we want radical governments that tax the rich to fund better public services, expand common ownership, build council houses, institute rent controls, abolish anti-union laws and engage in massive public investment.”

Haigh also derided the hopes of the anti-EU Left as fundamentally flawed, saying: “Let’s be clear: Lexit has never been on the table. It’s a fantasy to think that we could have that, and that something good could come of this. Brexit will slam the door on our friends from overseas and boost the lie that migrants are to blame for falling wages and the terrible austerity that has been imposed on us.”

Haigh went on to place Brexit in the context of a global resurgence in the far right, exemplified by figures such as US President Donald Trump, Tommy Robinson and the fascistic Brazilian presidential candidate Jair Bolsonaro.

“Brexit is a political project, and it has been built to strengthen the narratives of the far right,” Haigh said. “We need to understand that this global trend is not going to be crushed by pandering to their demands. We don’t beat them by giving in and saying ‘we can’t fight this’. Brexit puts the narrative of the far right on the winning side, and it’s our job to defeat it and provide a socialist alternative.”

Haigh said Sturgeon and Blackford’s recent statements on the disruption of Brexit were encouraging, but still worried it was “too little, too late,” arguing that the SNP needs to propose a “radical manifesto” and build links with the Left throughout Europe, as well as committing more resources to organising in support of a further vote on Brexit and engaging in further action on the matter in Holyrood.

Fiona Robertson, Disabled Members’ Group of the SNP, argued that continued membership was all the more vital in light of the recent landmark report from the Intergovernmental Panel on Climate Change (IPCC), which has predicted the average global temperature will hit the ominous threshold of 1.5C above pre-industrial levels by 2030.

Robertson said: “We don’t have time to build a new supernational entity to deal with what’s coming in the next few decades. It’s already begun; climate refugees are already on the move. Whole countries are already starving because of the effects of climate change. People have complained about the refugee crisis so far, but we have not even begun to imagine what’s coming.

“We need to keep building the case for a Left not just here, but across Europe.” SNP MP Chris Stephens

Chris Stephens MP, the SNP Westminster group’s Fair Work representative, said of Tory Brexiteers: “The same people who lecture us about national sovereignty are, in other spheres of influence, advising people that they should be investing their money in the European Union.

“What do these hardline Tory Brexiteers mean by that? The first person they’re going to turn to for a free trade deal will be President Donald Trump. My view is quite simple: that will be TPP (Trans-Pacific Partnership] look mild by comparison. You will have public contracts and public services opened up to competition. And the reality of that is, we could end up with a situation where there is less national sovereignty outside of the European Union as we would have inside of it.

“We need to keep building the case for a Left not just here, but across Europe.”