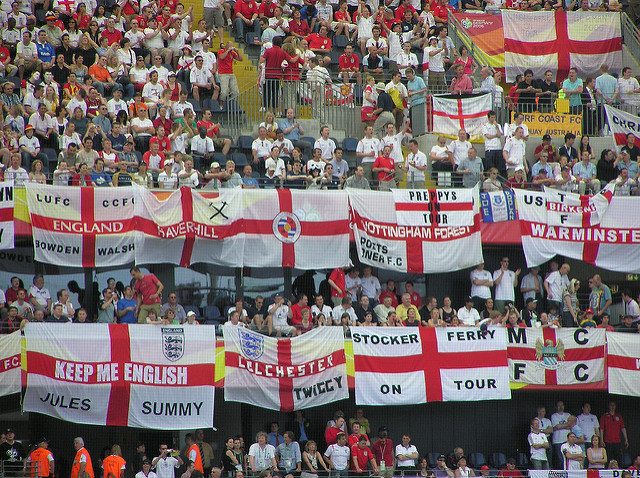 CO-FOUNDER of openDemocracy Anthony Barnett has been writing a book over the course of the European Union membership referendum.

Ten chapters into his book, ‘Blimey, it could be Brexit!’ he considers the diverging patterns between different UK nations during the EU referendum – and especially the need for a new England to meet changing politics.

Barnett, involved in politics and campaigns for decades, was director of constitutional reform group Charter 88 from 1988 to 1995.

In an interview with CommonSpace, Barnett – previously director of constitutional reform group Charter 88 – explains why the EU vote matters for England, and why politics should change to reflect the new relationships between nations in Britain.

Do you believe that Scotland being dragged out the European Union due to votes in the rest of the UK will lead to Scottish independence?

Yes. Perhaps the word ‘dragged’ is wrong. Scotland has its own sovereign parliament. I emphasise sovereign, The Vow opens by saying that the Scottish Parliament is ‘permanent’. Gordon Brown, who oversaw the formulation of The Vow, was fully aware of the explosive constitutional consequences of this term.

It means that Westminster’s sovereignty no longer extends to Scotland. Now, suppose this sovereign parliament is confronted with the circumstances you describe. I’m not saying they are likely, but if indeed the referendum is as close as the polls currently suggest (not that I believe in them) then it is possible that there will be a vote for Brexit.

But as I have argued, it isn’t Brexit, it is Exit, with an E for England not a B for Britain, because Scotland will have voted to remain. The Scottish Parliament, and government, will then be faced with the fact that the Scottish people have stated via a referendum an unequivocal will to stay in the EU.

It must therefore be the duty of the Scottish Government and parliament to seek to protect and fulfil this popular judgement. They will have to seek to open negotiations with the EU as to how they can best do this.

Now it is possible that opinion polls will show a clear majority in Scotland for staying with England outside the EU if a Brexit vote actually occurs. In which case the Scottish Government is committed to not pursuing independence until it is confident that this is the will of the Scottish people. You are in a better position than I am to judge what Scottish opinion will be like in the circumstances.

My feeling as someone who follows Scottish affairs as closely as possible as an Englishman, and who went up to Scotland for the independence referendum, is that a crucial section of Scottish opinion linked to the oil industry and finance who voted No to independence in part because it threw a question over Scotland’s place in the EU will switch to independence from Westminster if this ensures continuity of the European relationship and marketplace.

The question then boils down to whether Brussels will encourage Scotland to stay by opening up negotiations with a breakaway part of the UK. It refused to do so in the lead up to independence because it did not want to set an example. But this situation will be quite different.

The EU debate in Scotland has been subdued compared to recent political events. Are people in England enthused by the debate on the European Union like people in Scotland were during the independence referendum? What similarities and differences are there in public engagement with these votes?

People in England are not as enthused with the EU referendum. This is because it is what I describe as a ‘bad’ referendum unlike the ‘good’ referendum you had in Scotland. Yours was called by a government for positive reasons, where it knew what it wanted, and people really faced up to the future of your country in what I call an admirable and healthy way. Even if it was sometimes painful, and divided families and friends, this was because everyone understood it was a core issue about the nature of the country and your society.

David Cameron’s referendum was called by someone who did not want to have it, and may be never really have thought it would happen, and declared it at short notice in order to get it over and done with. He began with a lie by saying that of course he thought it would be reasonable for people to vote to leave even if he preferred the advantages of staying.

Actually he was even then appalled at the prospect of leaving and never thought it might happen. Also, the two leading forces in the referendum are both hostile to Europe and there is no positive case being made for sharing sovereignty and for committing Britain to being an active part of the future of the European Union governed by very different principles to those of Westminster. There is very little positivity in the whole affair and the consequence of this will be toxic afterwards.”

Does the style adopted by the Remain campaign – economic warnings and unity between establishment figures – risk a similar backlash in England post-referendum to that which benefited the SNP in Scotland?

It depends who wins. If the government wins there will not be a positive release of energy. If the Brexiteers win, who knows what will happen. It will partly depend on how the EU itself reacts. It’s important in terms of this contrast to realise that in Scotland the government that called the referendum wanted change whereas here the government has called it in order for things to stay the same.

Rightwing campaigns (like the EDL below) have embraced Englishness, while the left has generally stayed away 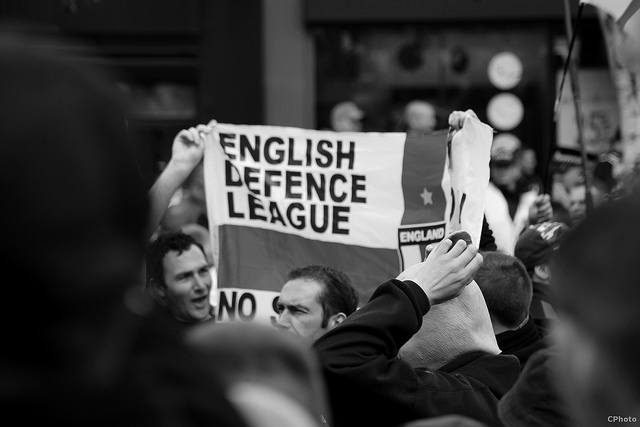 On openDemocracy you’ve written about the need for a leftwing perspective on England and Englishness. Why do you think the English-left, especially the Labour party, has persistently focused on Britain?

Labour is a British party. It has always historically had important Scottish and Welsh leaders and it was formed at the high point of Victorian imperial power and came to office as a British force, originally in May 1940 when it entered the coalition headed by Churchill, indeed, arguably, it created that coalition.

So from the point of view of the Labour party it doesn’t –  or rather it didn’t –  make sense to ask it why it focused on Britain. What else could it do? England never existed as a separate political entity. Today it is a political entity waiting to happen. If the left doesn’t get there and leaves it to the right then it will be a rightwing political entity.

What would an English civic nationalism look like? How would it be different to the political leadership of Ed Miliband or Jeremy Corbyn?

Both Miliband and Corbyn are British politicians. Neither have openly supported proportional representation, which is the starting point for civic nationalism because it builds pluralism into government and protects the representation of minorities and of course neither of them support an English Parliament, at least not yet. For an English civic nationalism see my answer to the next question.

You say that isn’t simplistic to talk of Britain as a single political identity, now that its composite parts are so divergent. But isn’t the same true of Scotland and England, which are internally highly diverse between their norths and souths, cities and rural areas?

No nation has a single political identity in the sense of political policies or political parties. They are national identities within which democratic politics takes place, with the emphasis on democracy meaning argument and divergences views.

The critical aspect of modern democracy is that it has to be constitutional. This means it must include fundamental rights that protects minorities of all kinds. Modern democracy is not the tyranny of the majority, nor winner takes all politics as we see in Westminster with the first-past-the-post system. So of course both Scotland and England are highly diverse, wonderfully so, I don’t regard this as a problem as I am not seeking a monolithic singular entity as an answer – on the contrary.

I do think that any English political settlement would be highly decentralised. If you have Yorkshire and possibly Cornwall (arguably a separate nation for some) and certainly London and Lancashire in the West Country and East Anglia all celebrated for their voice and distinction you’re going to have a very high degree of autonomy as well as a network of cities and another network of rural counties.

Insofar as I can judge it seems to me that there is not nearly enough radical decentralisation taking place in Scotland. The SNP needs a transformative political project to build on the energy of the referendum and this should surely be to experiment with different forms of network decentralisation spreading self-government across Scotland.