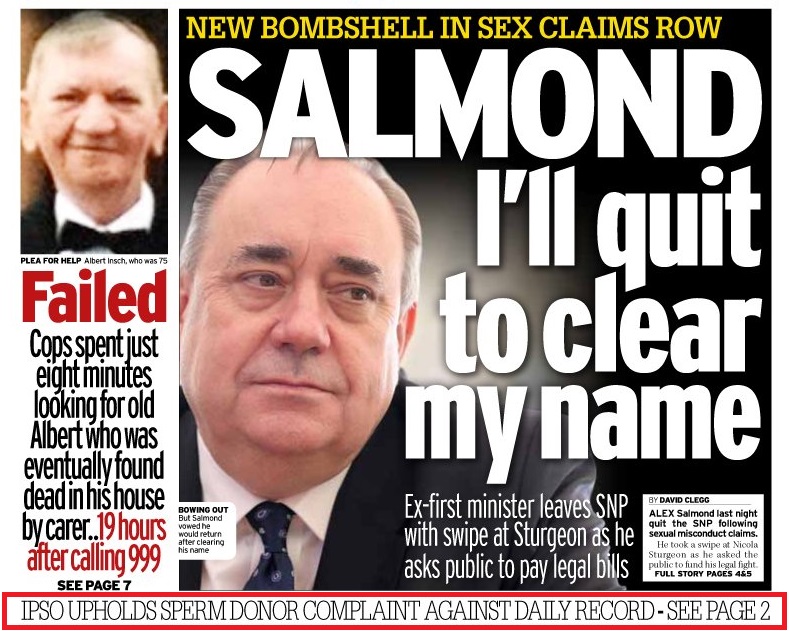 Anthony Fletcher, a sperm donor who was wrongly accused by the Daily Record of illegal activity, writes about his complaint to IPSO which was upheld with an apology on the front page, and offers an explanation as to why such a big mistake could have been made.

YESTERDAY, for the first and last time, I bought a copy of the Daily Record. It certainly wasn’t the umpteenth hysterical front page headline about the Alex Salmond “scandal” that made the purchase irresistible, but instead something printed in much smaller lettering at the foot of the front page. “IPSO upholds sperm donor complaint against the Daily Record – See Page 2.”

That was a reference to a complaint against the Record that I submitted to the press regulator IPSO some four-and-a-half months ago. It’s relatively rare for IPSO to uphold a complaint, and very, very rare for them to force a publication to make a front page reference to an adjudication, which gives you some idea of the seriousness of the Record’s transgression.

There has been a lot of pious talk as the Salmond story has unfolded about Record journalists “just doing their job” in a democratic society, but in case anyone is tempted to give them the benefit of the doubt, I’d suggest you read my own story first. It’ll disabuse you of any notion that the Record, even at the most senior editorial level, have the remotest commitment to basic journalistic good practice.

On 16 April of this year, the Record ran a front page smear piece about me. From my own point of view it was a lightning bolt out of nowhere – I had absolutely no inkling that it was coming. The claim was that I had used Facebook to “illegally” donate sperm on the “black market” to dozens of women, and that 22 children had been conceived as a result. This was partly true – I am indeed a Facebook sperm donor, and at the time of the article I had 22 donor-children if ongoing pregnancies were included. (The number is now 23.)

But the problem with the article was very simple: donating sperm informally to people you meet on the internet is perfectly legal. It’s not in any sense a “black market” activity – and especially not if you don’t charge, which I have never done. The Human Fertilisation and Embryology Authority even has a section on their website which explains to women that home insemination using sperm from an online donor is one option open to them. The Record were effectively implying that the relevant government authority has been openly promoting “illegal” activities for years!

As you can imagine, the published lies were a hammer blow to me personally, and initially I felt powerless to do anything about them. I was astonished by how many of my former sperm recipients saw the story, recognised me by name, and contacted me in a state of distress. I was particularly concerned that the article would remain online for potentially decades to come, and that my donor-children might one day do a Google search of my name, and be wrongly informed that the circumstances of their conception were “illegal”. It should hardly need stating how traumatic that could have proved for them. However, I soon noticed something quite interesting: although the women who contacted me were upset, not one of them actually believed the Record’s story. They had all rapidly worked out that it was probably a pack of lies, which speaks volumes about the lack of authority that tabloid hacks command these days.

Nevertheless, I desperately wanted to take some action, and after a few hours I realised that the only game in town was IPSO. I wasn’t hugely optimistic – I knew that IPSO have a reputation for letting newspapers off the hook on the basis of almost comical technicalities, and I also discovered to my dismay that the Record stable (formerly Trinity Mirror, now called Reach plc) have a hotshot “compliance lawyer” called Paul Mottram, who apparently has a fearsome reputation for successfully seeing off IPSO complaints. I assumed he must have given the green light to the Record’s story, and that he must have had a carefully prepared legalistic defence for doing so.

READ MORE – Robin McAlpine: The Sunday Herald was once Scotland’s future; the media we have is only its past

As the complaints process unfolded, though, it became clear that the emperor had no clothes. Mottram and the Record had no meaningful defence at all. Incredible though it may seem, the article was published on the front page without it even occurring to any journalist, or to the editor, or to the compliance lawyer, to actually check whether the claim that I had broken the law was true or untrue. Somebody had whispered in their ears that it was true, and that was enough for them to stick it on the front page for hundreds of thousands of people to see. They had done so in “good faith”, apparently.

How could such a catastrophic failure of journalism ever have happened? For many weeks I was baffled. I simply couldn’t understand why the Record would even want to invent a wild allegation that I, a random bloke they don’t know from Adam, had broken the law. But the clue that eventually unlocked the puzzle was the extensive direct quotes from me that were included in the article. I have never been interviewed by the Daily Record, so I was initially mystified as to where the quotes had come from, and yet I knew they seemed rather familiar. It finally dawned on me that they could only have come from a brief telephone conversation I had in early March with a journalist called Gareth Crickmer who introduced himself as a freelancer working for “the Marco Richards press agency”, and who told me he was researching an article for an overseas health publication.

If only I’d had the presence of mind to do some research on the Marco Richards agency before agreeing to speak to Mr Crickmer, I might have saved myself months of unnecessary stress, because it turns out they are not a “press agency” in any real sense. They are in fact a PR agency dedicated to getting propaganda into the UK press on behalf of paying clients. This is the central boast on their website:

“As an agency run by journalists we don’t send press releases. The fact is that most press releases are either never read or don’t contain a story that is strong enough to make the news. We write the story ourselves and send it straight to senior Editors. It requires little editing and our clients know exactly what will be published.”

In all probability, then, the Record didn’t merely fail to fact-check their own article – it looks like they didn’t even write it themselves. They were motivated purely by laziness – they were presented with a ready-made front page sensationalist story about a local man and they couldn’t resist running it. I can only speculate as to who the Marco Richards agency’s paying clients may have been, but it’s clear enough that the only people who were portrayed in a positive light by the article were a Czech fertility clinic called IVF Cube and its director Dr Hana Visnova, who was presented as an expert speaking out against the horrors of “black market” sperm donation. As there is no particular reason why a Scottish newspaper would turn to a Czech clinic for an expert opinion, it seems at least a plausible hypothesis that the Marco Richards agency was tasked with drumming up trade for IVF Cube via the UK press, and that they decided to do it by inviting the Daily Record to trash the reputation of a Scottish donor. The article therefore appears to have been a rather sinister form of undisclosed paid advertising – something that Record readers are still unaware of, even after the publication of the IPSO ruling.

This is what Daily Record “journalism” looks like in the year 2018. It ain’t pretty. OK, not every front page story in the Record comes about in the way described above, but I would suggest that any controversial front page “exclusive”, whether it be about Alex Salmond or anyone else, ought to be regarded as highly suspect if it’s published by a newspaper that has so recently demonstrated such a total disregard for journalistic ethics.