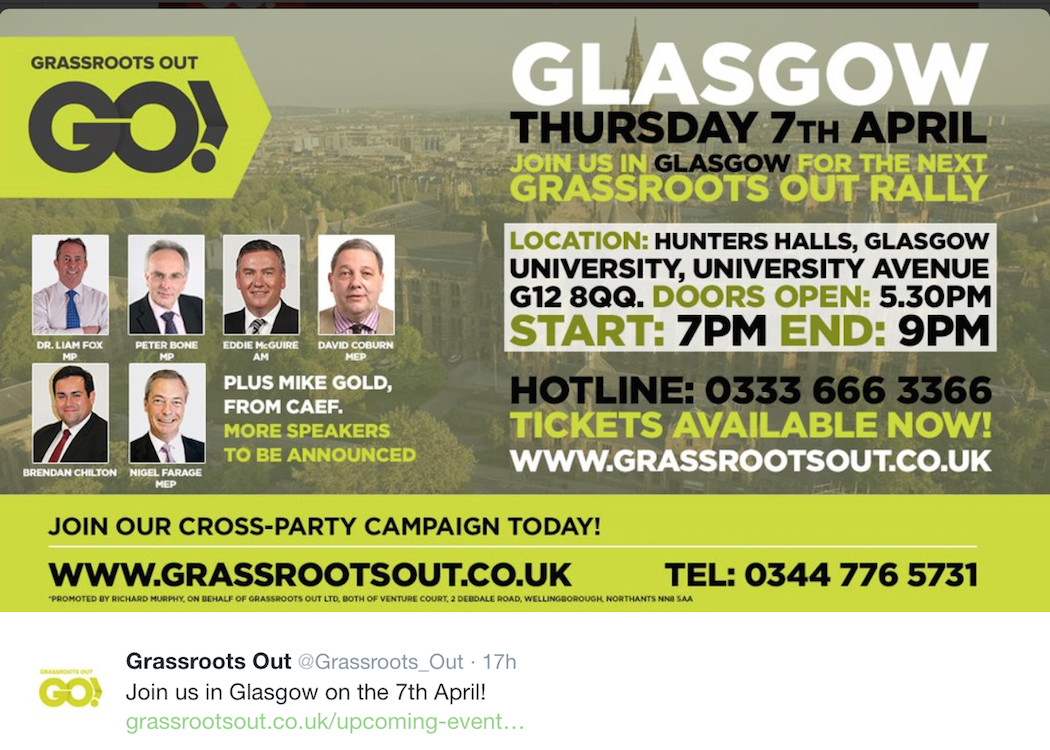 Australian football commentator will not appear in Glasgow as advertised

THE RIGHT-WING campaign against the European Union has got off to a shaky start in Scotland by confusing its local speaker with an Australian sports presenter.

‘Grassroots Out’, a main campaign against the EU, will gather in Glasgow tonight [Thursday 7 April] with Ukip leaders Nigel Farage and David Coburn, alongside Tories Liam Fox and Peter Bone.

However, ‘Eddie McGuire AM’ – pictured in the event’s advertising – is an Australian TV presenter and Aussie rules football commentator who knew absolutely nothing about the event.

The case of mistaken identity confused Eddie McGuire, a Glasgow trade unionist, with his namesake from down under.

“Even though my late father Eddie senior was born and raised in Glasgow (Hamilton Lanarkshire to be precise) and served in the Cameronians Scottish Rifles in World War II, I am not speaking in Glasgow in the near future.” Eddie McGuire, Australia

The news will disappoint fans of the Australian media man.

Tim Newling, an English Ukip supporter, had said: “Surprised to see Eddie McGuire in the line up, I haven’t seen him since living in Australia.”

‘AM’, publicised alongside McGuire’s name, is a royal order of Australia granted for public service – similar to the OBE/CBE titles in the UK. Eddie McGuire from Glasgow has not received an Australian royal award.

By coincidence the Australian McGuire, speaking to CommonSpace, explained that his family does have past and present connections to Glasgow and Scotland.

“Even though my late father Eddie senior was born and raised in Glasgow (Hamilton Lanarkshire to be precise) and served in the Cameronians Scottish Rifles in World War II, I am not speaking in Glasgow in the near future,” McGuire joked.

“By pure coincidence my brother Frank, a member of the Victorian Parliament, Australian Labor Party, is actually in Glasgow at the moment. While Frank was born in Glasgow I’m the first of our linage born in Australia.

“Plenty of cousins still in Glasgow and we all remain keen followers of Celtic I hope ‘your’ Eddie McGuire is not too disappointed with the photo he’s been portrayed with!”

When CommonSpace called Grassroots Out for comment a member of the campaign team claimed their press team “are working without phones” so couldn’t be contacted directly. “I don’t know why that is,” he added.

Scottish Green Party spokesperson on Europe, Ross Greer, felt the event symbolised the confused and backward looking nature of the ‘Leave’ campaign: “That the Brexit campaign has been forced to bus most of their panel up from down south shows just how non-existent they are in Scotland. The fact that they’ve gone with hard right Tory MPs and Ukip MEPs proves that they don’t have the slightest clue how to win over Scottish voters, which is borne out in poll after poll showing an overwhelming majority of people in Scotland wanting to stay in the EU.

“These are the people who stand to benefit from a vote to Leave and looking at what they have to say, it’s clear that we need to deliver the largest Remain vote possible here to defeat their hateful hard-right agenda.”

The EU referendum will take place on June 23, a month and a half after the Scottish parliamentary elections.

Polls have given the pro-EU side a lead, although erratic, while a few surveys have placed the Out campaign ahead.

Pictures courtesy of Grassroots Out