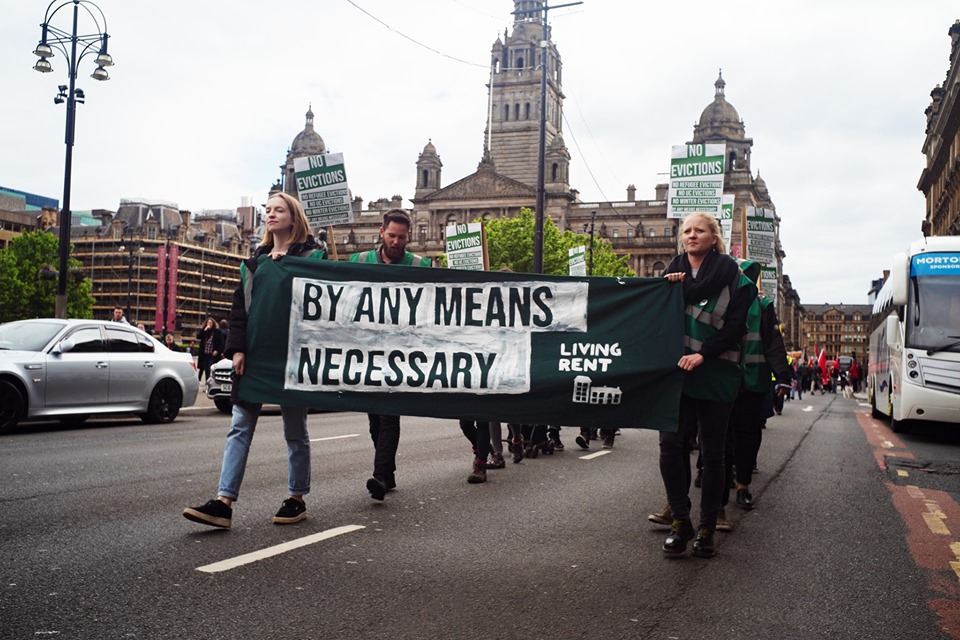 CAMPAIGNERS against the attempted lock-change eviction of 300 asylum-seekers in Glasgow by the Home Office contractor Serco are threatening a ‘lock-in’ of Glasgow City Council if they don’t step up action in support of the asylum seekers.

The Living Rent tenants’ union has organised the protest for Tuesday 20 August, to demand “less talk and more action” from the council, months after the publication of proposals by the Glasgow Refugee Task Force (GRTF).

The protest comes as the September hand-over of the contract to house asylum seekers from Home Office contractor Serco to Mears group approaches. The Scottish Refugee Council has said three people have already been made homeless by the evictions, with more than 50 eviction attempts blocked by court interventions, a development that has led to pressure on the company to halt all of the evictions.

Former Prime Minister Theresa May refused in July to prevent the evictions. Now campaigners are making fresh demands upon Glasgow City Council to intervene and prevent a “humanitarian crisis” on the city’s streets.

A spokesperson for Living Rent said: “In the summer of 2018 when the news first broke of the forced destitution of 300 asylum seekers and refugees by the multinational company Serco, there was widespread condemnation from all sectors of society, particularly from Glasgow City Council, with Council Leader Susan Aitken going as far as to say that it would ‘trigger a humanitarian crisis’.

“In 2018, the council set up an Asylum Task Force to deal specifically with the affected 300 and find a solution to the problem. Yet here we are one year later, with the lock-change regime restarted and Serco even more determined to evict the 300 before they hand over the contract to the Mears Group. As we reach the eleventh hour of these evictions, it is time for the Asylum Task Force to step in and provide a real solution that keeps these people from destitution. As such Living Rent and other refugee and asylum seeker groups will be symbolically ‘locking-in’ the Council on the 20 August, demanding that they substantively stand up to Serco and the lock-change regime.

“As law centres around Glasgow receive more requests for interdicts and over 60 now filed, it seems more likely that Serco will ramp up their efforts in the coming weeks. The council now has no choice but to step in and intervene to avoid a humanitarian crisis on the streets of Glasgow.”

The GRTF’s recommendations included the right of refugees to work and changes to how they are registered in the Glasgow area, but did not address the issue of how to respond to asylum seeker evictions. Campaigners have been frustrated by the lack of concrete action on securing housing for those threatened with eviction.

Susan Aitken, Glasgow City Council leader, wrote to the Home Office in June stating the planned evictions were “deeply concerning” and called on them to “intervene” to stop it from occuring.

Aitken said here hands were tied in tackling the crisis due to the “no recourse to public funds” policy, which prevents council spending being used to support people who do not have citizenship.

She wrote: “The ‘No Recourse to Public Funds’ policy renders local authorities powerless to respond and unable to provide the necessary support for many of those who will be affected. They will therefore be made destitute.

“In order for Glasgow City Council to provide support, I would have to instruct officers to break the law.”

However, a guidance briefing by the Convention of Scottish Local Authorities in February appeared to disputed this, finding that that Scottish local government has a duty to safeguard the most vulnerable people in such situations, which can include providing financial support to meet essential living costs and offering help from social workers to avoid destitution.

This finding led Scottish Greens MSP Patrick Harvie to state that there was “no blanket ban on using public funds to provide accommodation to asylum seekers who face destitution.”

The protest comes after months of an escalating campaign to secure tenancy for the refugees.

CommonSpace requested comment from Glasgow City Council but they had not responded by time of publication.