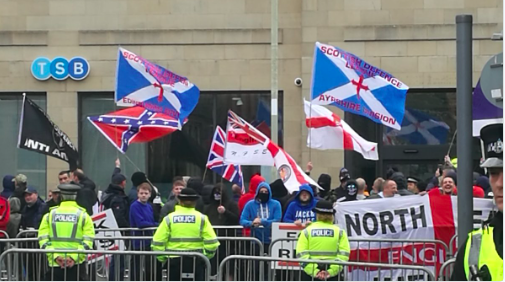 The SDL is against the construction of a new £1m mosque on Jeanfield Road in the city, and had organised a demonstration to vent anger at the Muslim community and Perth and Kinross Council on Sunday.

However, the SDL only managed around 30-40 members whereas the counter protest united the local community and was attended by MPs. A large presence from Police Scotland was also present.

“There was a massive sense of unity in the city.” Unite Against Fascism Scotland

Tayside Police tweeted to say the demonstration had ended and one 25-year-old man was arrested for a breach of the peace offence.

Demo in #Perth is now over. Thanks to public for patience and co-operation. A 25-year-old man was charged in relation to breach of the peace

CommonSpace spoke to Unite Against Fascism Scotland (UAFS), which opposed the SDL’s protest. Carlo Morelli of UAFS told us that although there were people from all over Scotland, he claimed the counter demonstration was around 80/90 per cent people from Perth. He said: “In every way going it was terrific.

“We had people from the mosques, people from all the Christian groups, we had Jewish people there – all of whom spoke and participated in the event.

“It was really diverse and a really mixed community. It gave us a fabulous confidence against the Nazis.

“The Nazis came, I think it was 38 they brought, which is no different to what they take everywhere else, so they’re not getting a big audience out of this.

“There was a massive sense of unity in the city, which was terrific and we’re really pleased with the outcome – it couldn’t have been better.”

A great feeling of solidarity in Perth today. They thought they would divide our community. Only brought us together. pic.twitter.com/VFLKpseftA

No place in Scotland for hate that is the message in Perth today. Proud to stand with socialists against fascism pic.twitter.com/geO02jGC5M

“It shows what we can do when we unite together, and that’s what this was about.” Unite Against Fascism Scotland

Morelli said: “The target of the SDL’s protest, the Muslim community, members of that community came in big numbers and were really, really proud to be there.

“I spoke to one of the women involved in the community and she told me she was so proud of everybody being there in the city. It’s had a real impact in the city which is great, its exactly what we wanted.

“It shows what we can do when we unite together, and that’s what this was about.”

Journalist James Doleman attended the protest, which saw SDL members unable to park their bus due to the counter protest – a sight that drew cheers from the local community and protestors.

The Scottish Defence League in Perth, around 50 surrounded on three sides by counter-protesters pic.twitter.com/dqNIZMV5un

CommonSpace reported previously that the SDL had set up the protest against the new mosque scheduled to be built in the city.

Banner at Perth protest against the Scottish Defence League pic.twitter.com/Q9Z2Wby4yD