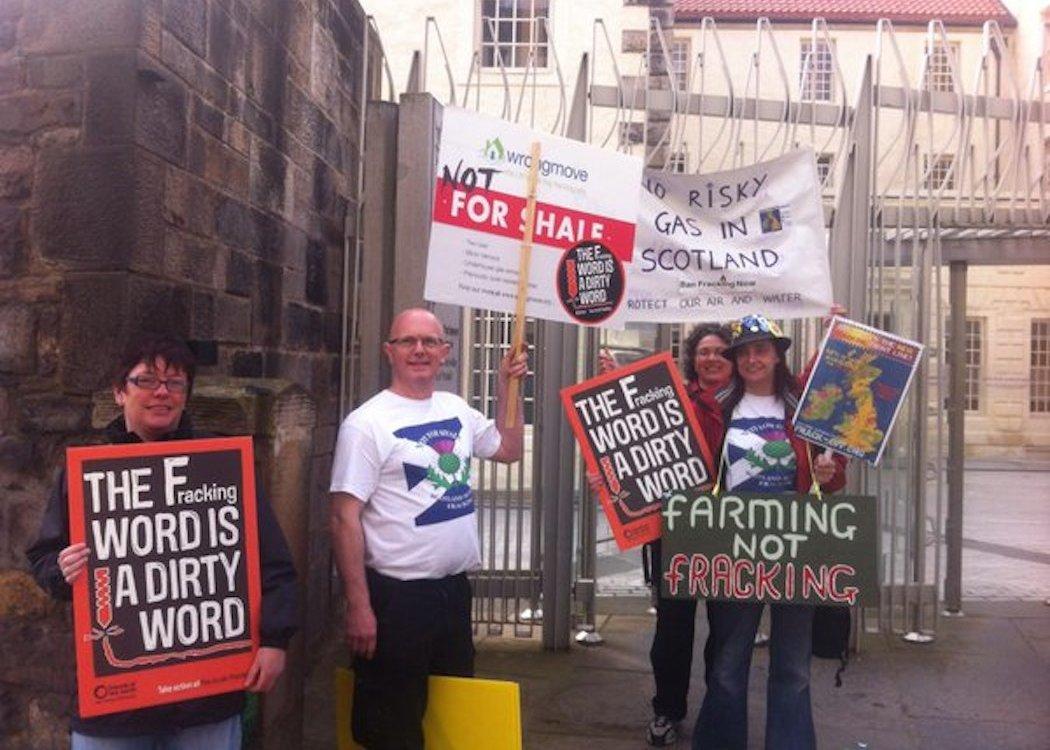 NEW MEMBERS of the Scottish Parliament (MSPs) were welcomed by anti-fracking protests as they began their first sitting of the fifth session of Holyrood.

Campaigners from Scotland Against Fracking and SNP Members Against Unconventional Oil and Gas (Smaug) staged the event as parliament got back under way following the recent election.

Fracking, which has faced persistent public opposition across Scotland and the world, has been placed under a moratorium by the Scottish Government while further evidence on the practice is reviewed.

“We’re basically here because the MSPs have now been elected so it’s time to hold their feet to the fire.” Trish Buchan, Scotland Against Fracking

Katherine Shea, a member of the SNP’s Leith branch, joined other Smaug members wearing ‘Frack off’ badges with the party’s emblem.

“The SNP produced these badges in the 2015 General Election campaign as a pledge for MPs at Westminster,” Shea told CommonSpace.

“So we’re holding the party to what they promised, and at the same time as Ineos is hiring managers for the wells and putting in planning applications as soon as this parliament opens. We think it’s really important to keep our views to the fore.”

Trish Buchan, an administrator of the Scotland Against Fracking group, travelled from Falkirk to join the event.

“We’re basically here because the MSPs have now been elected so it’s time to hold their feet to the fire, and make sure they stick to the promises they made before the election,” Buchan explained.

The government has promised an evidence-based assessment of the moratorium before a decision on its future.

The SNP manifesto said: “We will not allow fracking or underground coal gasification in Scotland unless it can be proved beyond any doubt that it will not harm our environment, communities or public health.”

Buchan is confident that the investigation will find against fracking: “I think there’s only one side it can come down on if it’s done in an unbiased manner. There’s empirical evidence across the globe of the environmental harm and damage that can be done by fracking.”

The Scottish Greens, Labour, and the Liberal Democrats were elected on positions opposed to fracking in the election. The Scottish Conservatives are in favour.

When Shea was asked whether fracking would be banned without political campaigning, Shea replied: “Not entirely, no. Well not if Ineos [major gas corporation based at Grangemouth] is hiring. That seems very presumptuous, and you wonder what basis they are making those moves, when it’s supposed to be under a moratorium at the moment.”

The Scottish Government has banned any development of new nuclear power stations in Scotland using its devolved planning powers. Powers over the granting of onshore fracking licenses are being devolved to the Scottish Parliament .