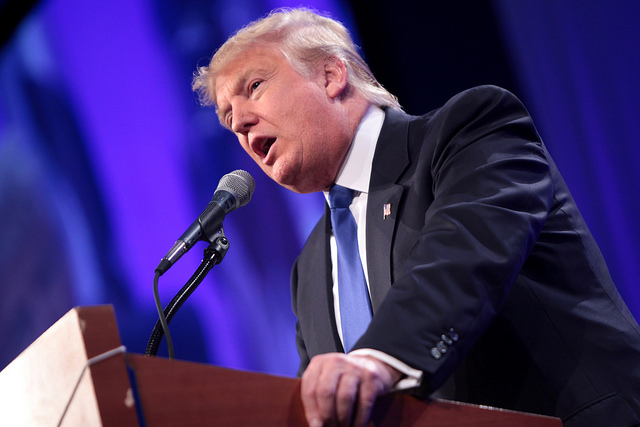 UNITED STATES president Donald Trump has today (12 July) threatened to split from NATO in a bid to press leaders to commit to increased military spending targets – a move anti-war campaigners have urged Prime Minister Theresa May to reject.

“The only ones that will benefit from the drive for ever-greater military spending are the arms companies that stand to make a killing from it,” said Andrew Smith of Campaign Against Arms Trade (CAAT).

At the tail-end of a summit of the military alliance’s 29 member states, diplomats have reported that Trump warned the US would “go it alone” if leaders failed to raise their military spending to at least two per cent by 2019, while the president pressed leaders to boost spending even further to four per cent of gross domestic product (GDP).

Currently, only eight Nato countries out of 29 meet NATO’s two per cent of GDP target on defence spending. Trump has claimed the US spends 4.2 per cent of GDP in “actual numbers”, but NATO official figures state that the US currently spends 3.5 per cent of GDP on the military.

Asked about the issue in an emergency press conference on Thursday, Trump skirted the question but said he would be “extremely unhappy” if the states did not increase spending substantially.

Asked whether he could make such a decision without the approval of the US Congress, he said: “I think I probably can but that’s unnecessary.”

READ MORE: 10 reasons you should join a protest against Trump and all he stands for

Arthur West, chair of Scottish Campaign for Nuclear Disarmament (CND) told CommonSpace that Trump ‘s latest comments on NATO were confused and added nothing to the task of making the world a more peaceful place.

“Trump’s recent remarks about the need for NATO countries to increase military budgets are unhelpful given the conflicts and wars raging across the world at the present time,” he said.

“International institutions such as NATO need to develop some new ideas to stop the violence and wars which are being carried out across the planet.

“We have enough weapons and military equipment in our world and it is now time for resolving some of the dreadful conflicts which are causing death and destruction across the planet.”

West added that the president should be focussed on ensuring the US can play a positive role in international relations. He said: “Instead of moaning and being rude about NATO, Donald Trump should turn his attention to the United Nations.

“He should use American influence and resources to help that organisation play a constructive role in fostering a more peaceful and just world.”

Pete Cannell of Edinburgh Stop the War Coalition said that Trump’s militaristic approach was not so different to mainstream US foreign policy, and that economic concerns were at the heart of the issue.

Cannell said: “Amidst the hype and bluster of Trump’s public comments it is clear that there is a sharp focus on pressurising NATO partners to increase military spending.

“The new target of four per cent which he is now talking about is way beyond what is practically feasible in the short or medium term. But on these issues Trump and mainstream Pentagon views are pretty well aligned.

“While Trump talks about unfairness and sharing the burden more equally, the real driver for this policy is the relative weakness of the US economy and the huge cost of new developments in military technology (including the mooted space command).”

READ MORE: ‘The socialists are back, and they are pissed’: American socialism in the age of Trump

Andrew Smith of CAAT said it was incumbent on the UK Government to take a principled stance on foreign policy in the face of US pressure.

“The US, the UK and other NATO countries have spent billions of pounds on a failed foreign policy centred around disastrous wars which have killed hundreds of thousands of people and done nothing to make people safer,” Smith said.

“Theresa May should challenge Donald Trump and his reactionary and racist ideas, not continue to offer uncritical political and military support to an unpredictable and dangerous president.”

Donald Trump arrived in the UK on Thursday, where he will meet with Theresa May and the Queen, before travelling to Scotland on Friday where he will be welcomed by the UK’s Scotland secretary David Mundell.

Mass protests against the US leader are due to take place in cities around the UK, including Glasgow, Edinburgh, and outside the Trump Turnberry Resort in Girvan, where Trump is expected to stay over the weekend.