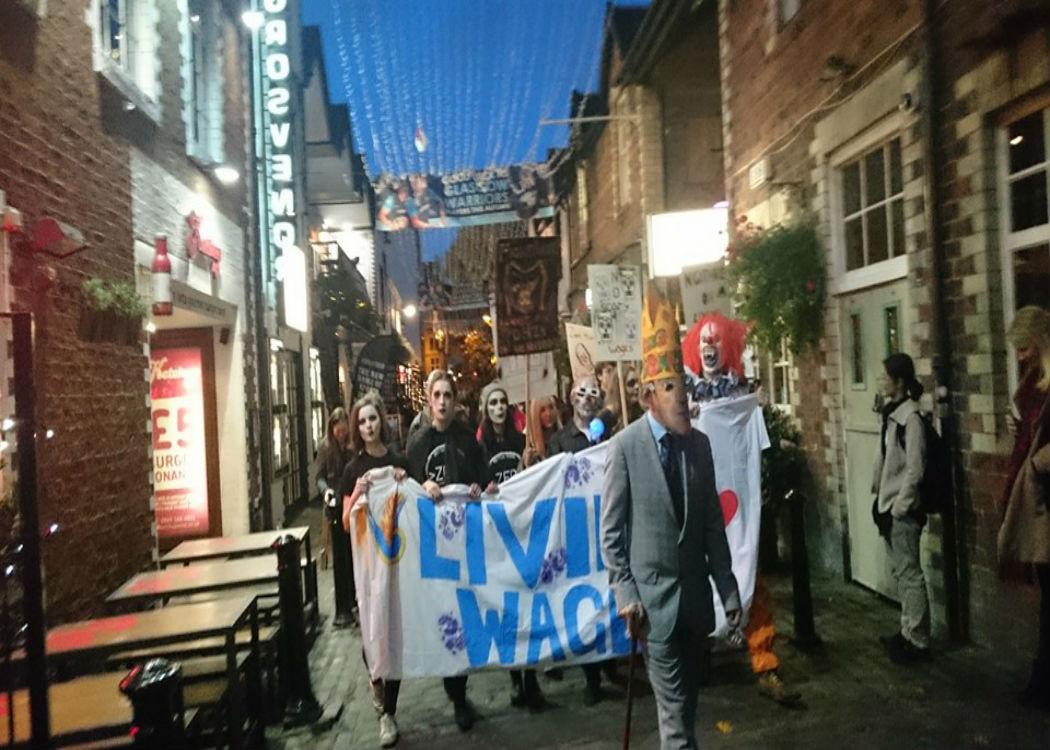 19/01/2016
david
Better than Zero repeatedly targeted the G1 Group employer in 2015
YOUNG CAMPAIGNERS in the Better than Zero campaign have warned exploitative employers of direct action, ahead of the recommencement of their protest campaign in 2016.
The trade unionists, who have been targeting service sector employers over exploitative working practices for several months , have said they intend to grow their movement to take on new employers and stage more complex protests.
In 2015 the activists responded to tip-offs from employees in workplaces that charge their staff for training or for uniforms. The campaign has targeted bars and restaurants where workers tips are taken by the company. The name ‘Better than Zero’ signifies the group’s opposition to so called zero-hours contracts, which compel workers to be available to work whichever hours their boss offers.
Speaking to CommonSpace, 17 year old Stella Rooney sent a message to Scotland’s ‘bad employers’.
She said: “Watch out. You can’t get away with this any longer. Every bad employer should beware.”
Rooney told CommonSpace that the campaign will continue to escalate its campaign into 2015 and would continue to target G1 group, Sport’s Direct and would expand its actions to target Amazon which has been accused of the calous treatment of their staff.

“Watch out. You can’t get away with this any longer. Every bad employer should beware.” Stella Rooney

Many of Better than Zero’s campaigns have been focused on Stephan King’s G1 Group, which owns 45 bars and restaurants, mainly in in Glasgow and Edinburgh. In March 2015 G1 was found to have underpaid almost 3,000 of its workers by around PS45,000.
Sport’sDirect owner Mike Ashely has been rocked by revelations of poor working practices in its warehouses.
Rooney also said the campaign had proven a successful model in attracting young people towards the idea of workplace organising.
“It’s been a really positive campaign so far, we’ve got a lot of young people involved who wouldn’t otherwise have had a way to become active,” she said.
“We’ve created a platform for challenging these companies where otherwise there wouldn’t have been one because the service industry isn’t currently well unionised,” she added.
Another leading Better than Zero activist Kieran McCallum, 18, told CommonSpace that the campaign’s actions and a similar turn to ‘social unionism’ involving creative action by young people throughout the UK had resulted in recruitment to trade unions.
“Unite have recruited almost 16,000 new young members to my knowledge over the past year. I’d say this is down to campaigns like ours, the hotel workers in London, the Decent Work For All campaign and others like it,” he said.

“We’ve created a platform for challenging these companies where otherwise there wouldn’t have been one.” Stella Rooney

The Better than Zero campaign also claimed a small victory in 2015 – helping to force Latin American-themed restaurant chain Las Iguanas to end their policy of deducting money from staff tips.
Most of Better than Zero’s campaigners are in their teens and early twenties. The activists were the most applauded speakers at a recent rally in Glasgow which saw the SNP leader Nicola Sturgeon and Labour leader Jeremy Corbyn speak together against the Trade Union Bill.
Better than Zero activists plan to engage in more protests in coming weeks.
CommonSpace journalism is completely free from the influence of advertisers and is only possible with your continued support. Please contribute a monthly amount towards our costs . Build the Scotland you want to live in – support our new media.
Picture courtesy of Better than Zero
Common Space
Archive
Share Article: