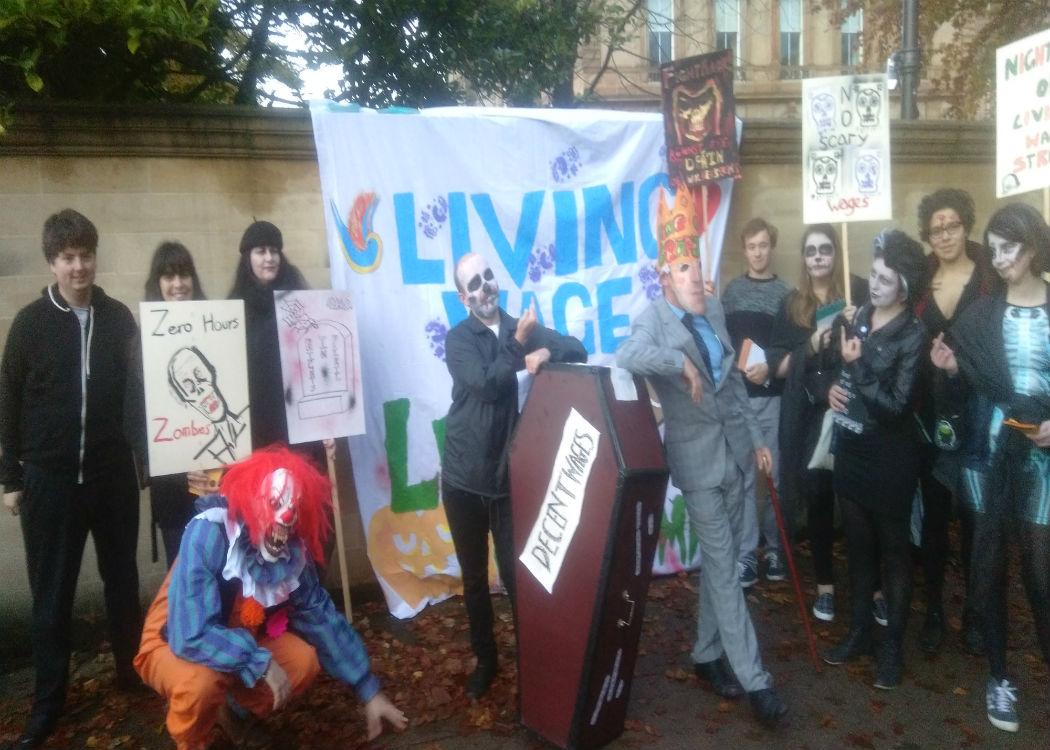 ANTI-ZERO HOURS campaigners have taken part in a Halloween themed stunt to highlight exploitative work practices in the hospitality sector in Scotland.

A group of around 40 mainly young trade unionists held a funeral procession from hospitality giant G1 Group’s Glasgow west end headquarters along Byres Road to the fashionable Ashton Lane, which hosts some of the group’s most popular bars. The activists then sang songs and chanted, calling on G1 group chief Stephan King to end exploitative work practices.

The stunt is the latest action in Better than Zero’s campaign against employers who, they allege, exploit the un-unionised status of many young people working in bars, restaurants, cafes and other service industry workplaces.

For several months the campaign has been targeting employers who they accuse of engaging in unsound employment practices including low wages, non-contractual Labour and charging annuities to deduct money from tips.

Video below courtesy of Better Than Zero

Jennifer McCarey, chair of Glasgow trades council told CommonSpace: “We are out to highlight exploititative work practices, particularly amongst young people such as zero hour contracts, people having to pay for their uniforms, having no safe route home at night and having to pay their own taxis, all sorts of scams to cut peoples wages and tips. That’s all really predominant in the hospitality industry in this city.”

Stephan King’s G1 group is one of the largest service sector employers with 45 bars and restaurants, mainly in Glasgow and Edinburgh. He has been one of the main targets of the campaign from its outset.

Rebecca Gault, 16, told CommonSpace: “It’s a necessity for people to survive and Stefan King says he’s providing a Living Wage and then takes money off. It’s not right, it shouldn’t be allowed.”

She added that trade unions are important for young people: “We need a place where we can voice our concerns about work,” she said.

The stunt comes after the campaign claimed its first clear victory in early October , when restaurant chain Las Iguanas ended its policy of deducting money from waiters’ tips following sustained action by Better than Zero and pressure group 38 Degrees.