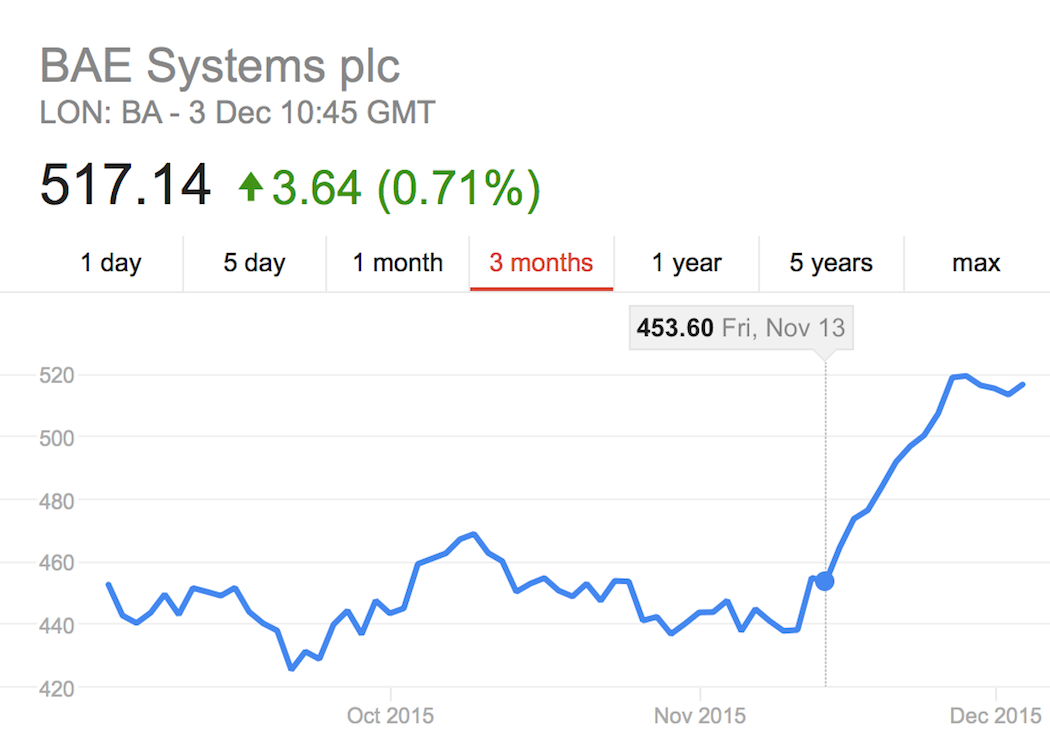 SHARE PRICES of Europe’s largest weapons manufacturers have all jumped following the UK decision to join the 15 month old bombing campaign in Syria.

In total BAE Systems, the main private sector beneficiary from UK military spending, has seen its value increase by 14 per cent in the two and a half weeks since the Paris attacks of 13 November.

Since the attack the UK Government has promised billions in extra security and military spending.

Aircraft and missile firm Airbus, which is a developer of Typhoon aircraft, is currently trading up 1.5 per cent since the stock market opened.

Finmeccanica, the giant Italian military firm, has seen its shares rise almost 2 per cent since this morning.

Andrew Smith of Campaign Against Arms Trade told CommonSpace: “Unfortunately, where most of us see war and destruction the arms companies see a business opportunity. It is conflict and military intervention that fuel arms sales, and companies like BAE are only too happy to cash in from it. These companies don’t care who uses their weapons or the damage they cause, the only thing they care about is profit.”

The arms sales of the world’s four biggest corporations alone are equal to more than $100bn for 2013.

US investigative group The Intercept previously noted how the Paris attacks led to a rise in stock values for the country’s biggest arms companies .

The political response to events in Paris has been to prioritise a military response over humanitarian alternatives.

Recently Chemring, an arms company whose tear gas has been used against civilians in Egypt and Hong Kong, welcomed the financial opportunities of violence in the Middle East.

It’s annual report stated : “Chemring is well-positioned to benefit from any sustained increase in demand as a result of the conflict in the Middle East. Furthermore, although there has been a slowdown in the West’s military spending, it is important not to forget that in both Asia and the Middle East there are signs that military spending is on the increase and Chemring will be looking to take advantage of this trend wherever possible.”