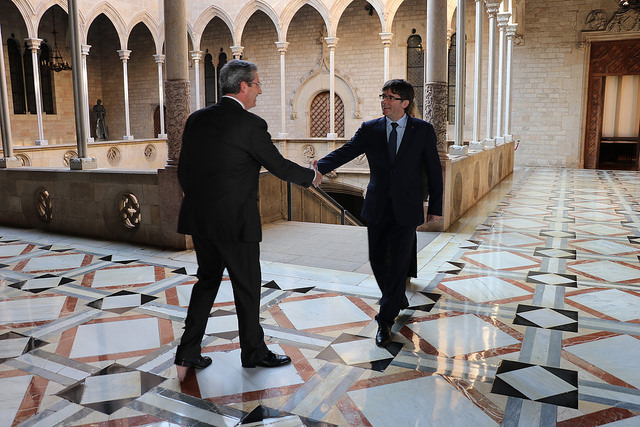 Spanish prosecutors seeking arrest of Catalan president, according to his Belgian lawyer

CARLES PUIGDEMONT, the president of the Catalan government dissolved by Spanish Prime Minister Mariano Rajoy, is now subject to a European arrest warrant, his Belgian lawyer has stated on Flemish television.

The follows the jailing of nine Catalan government ministers by Spanish authorities on charges of sedition, rebellion and misuse of public funds, following the Catalan parliament’s vote in favour of independence and their subsequent proclamation of a Catalan republic.

“I have just received word from my client that indeed it [the arrest warrant] has been issued against the president and four other ministers.” Carles Puigdemont’s lawyer, Paul Bekaert

Speaking to the Flemish VRT channel on Thursday evening, Puigdemont’s laywer Paul Bekaert said: “I have just received word from my client that indeed it [the arrest warrant] has been issued against the president and four other ministers who are in Belgium.

“Practically, it means the Spanish judiciary will now send an extradition request to federal prosecutors in Brussels.”

When asked if Puigdemont will remain in Belgium, Bekaert responded: “Of course. He has pledged his full cooperation with the Belgian authorities.”

Prior to the arrest warrant being issued, Puigdemont spoke on Catalan television from an undisclosed location, condemning the arrest of nine of his colleagues, including his vice-president, Oriol Junqueras, and foreign affairs minister, Raul Romeva.

Spanish magistrate Carmen Lamela argued that the imprisoned Catalan ministers “had to be detained because they might otherwise leave the country or destroy evidence”.

The Spanish Government, which after dissolving the Catalan government announced a new election on 21 December, had previously stated that Puigdemont and his colleagues would be able to stand in the election “if they were not in jail”.

“The jailing of elected leaders is wrong and should be condemned by all democrats.” First Minister Nicola Sturgeon

Reacting to news of the arrests prior to Puigdemont’s arrest warrant becoming publicly known, First Minister Nicola Sturgeon said on social media: “Regardless of opinion on Catalonia, the jailing of elected leaders is wrong and should be condemned by all democrats.

SNP MP Douglas Chapman, a member of the All Party Parliamentary Group (APPG) on Catalonia, told the National newspaper: “I’m becoming increasingly concerned for the individuals concerned and what impact that will have on the December 21 election, and whether they’ll be able to go ahead with any pro-independence candidates among the options.

“I’m sure there will be thousands of people who will want to take the places of those who’ve been jailed if they’re not allowed to stand, but it’s whether a pro-independence party or grouping will even be allowed to put forward candidates – what does that say about democracy in Spain, never mind the legal process?”

Speaking to CommonSpace prior to the arrests, Catalan activist Anna Arqué said of the December election: “We could well block elections held by Spain. I mean, what would we be doing? We proclaim a Catalan republic, and now we accept elections dictated by Madrid? Who’s going to control them? It’s a joke, right?”

In Barcelona and in towns across Catalonia, tens of thousands took to the streets in protest against the arrests, chanting “We are not afraid.”