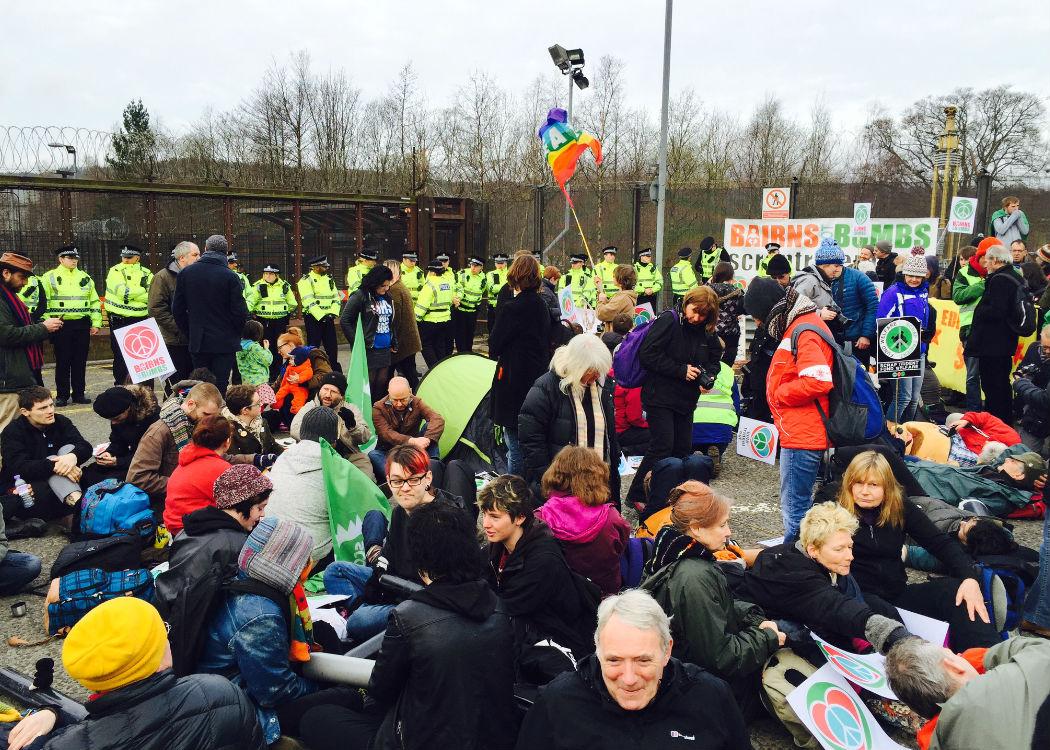 HUNDREDS of anti-nuclear weapons protesters are taking part in a blockade of the Faslane naval base on the River Clyde.

The Bairns not Bombs demonstration, organised by the Scrap Trident coalition, has gathered outside every entrance to the facility in order to stop work taking place.

The police are expected to arrest those who continue to block access to the site. A similar protest in 2013 saw 47 people arrested.

Among those taking part in the action is Patrick Harvie, co-convener of the Scottish Green Party.

The renewal of the Trident nuclear system will cost the UK taxpayer PS100bn over its lifetime with the ‘main gate’ decision on it is pencilled for 2016.

The SNP has stated it will never vote for Trident renewal, and the party may have a critical say in the next government if the Labour party is reliant on SNP votes in order to form a government.

A poll by the Campaign for Nuclear Disarmament (CND) found that over 50 Labour party candidates oppose the renewal of Trident but its leader Ed Miliband has said the issue is non-negotiable.

Speaking from Faslane, Jonathon Shafi, co-founder of the Radical Independence Campaign, said: “Currently there are lots of people are on the ground blocking the entrance but the police haven’t tried to move anyone yet.

“I think the determination of the anti-trident movement has been reinforced by the fact it is now a central part of the general election and will be a central feature of the political landscape in the aftermath of the election.”

The blockade is being livestreamed by Independence Live (click here to watch).

A Scrap Trident spokesman said: “We are delighted that in spite of a big police presence that people have been able to peacefully and imaginatively shut down the WMD base, putting their bodies on the line in their utter rejection of what Trident represents.”

Young Fathers, who are based in Leith, added: “Humans already have the ability to destroy the world. We can only blow it up the once. If there’s a nuclear war we’re all fucked. Fuck the Generals. Fuck the arms industry. We’ve got to start somewhere – no nukes. Love Young Fathers.”