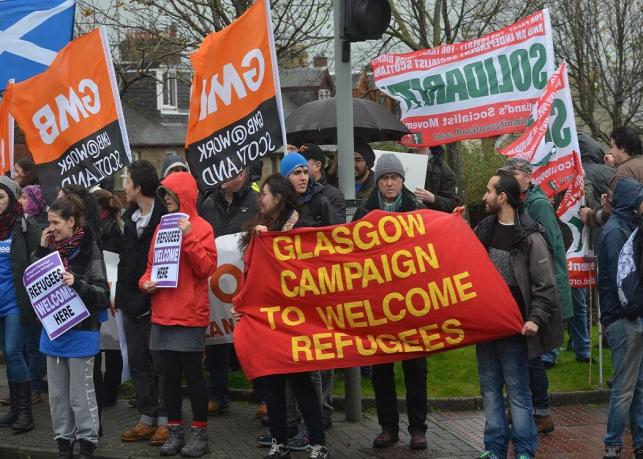 MILLIONS OF PEOPLE are on the move across the Middle East and North Africa. Forced out by war, famine, climate change, desperation, and hope of a better life; refugees captured the hearts of millions across Europe who have, despite the intransigence of some governments and hatred of racists, welcomed them.

Over the next fortnight, coinciding with the referendum on European Union membership, an exhibition will be held in Glasgow to amplify the voices and stories of refugees and migrants through art.

‘Glasgow Anew: Untold Stories and Transnational Perspectives’ will take place at the Pipe Factory, Glasgow, from the 11th-26th June as part of Refugee Festival Scotland.

The exhibition is a collection of recordings of Glaswegians who were born outside the UK speaking on their experiences. These are accompanied by personal objects to illustrate their stories of moving to the city, exploring issues of nationality, identity, prejudice and what it means to call Glasgow ‘home’.

The event includes the first exhibition of the Settled In Glasgow Oral History Archive (SIGOHA), an online collection of conversations with Glaswegians who were born outside the UK.

Alasdair Campbell, co-curator of Glasgow Anew, said: “It empowers the participants as storytellers. Recordings about their lives are played in their entirety, unedited, and personal objects such as sand from Robben Island or asylum documents both illuminate the incredible personal narratives of the participants and provide a window into the recent history of countries around the world.

“Meanwhile, shared ownership of the gallery with the participants themselves through film screenings, theatre and musical performances will help encourage dialogue and an exchange of transnational perspectives across the fortnight.”

Jessie Lawson, founder of the SIGOHA project, said: “Glasgow Anew seeks to democratise history: to give normal people the opportunity to tell their own story and influence how history will represent them.”

Glasgow Anew launches with a special event on 11th June at 8pm. For more information on the exhibition and a full programme of events in the space, visit the group’s event page or website.