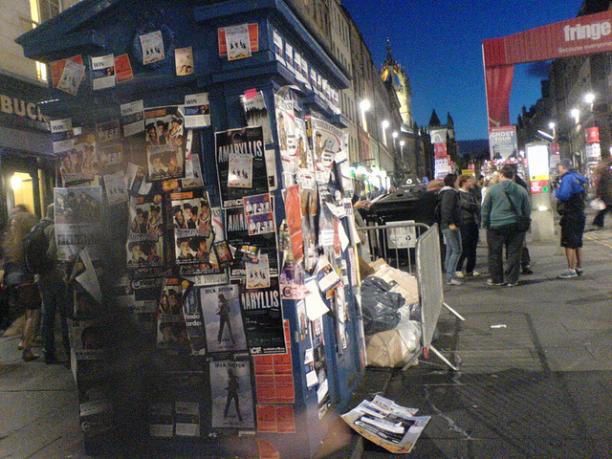 THE Fair Fringe campaign has called upon the Royal Society of Edinburgh to deny the use of its properties to the controversial Edinburgh Fringe company C Venues, which the campaign has described as the festival’s worst employer following numerous accusations of worker exploitation.

The demand comes in the wake of a significant victory for the trade union-backed Fair Fringe campaign earlier this month; in a surprise move, it was announced that the University of Edinburgh would deny C Venues the right to Adam House on Chambers Street, one of the largest venues at the festival and C Venues’ primary event location for nearly 20 years.

The decision – which followed a review carried out by university officials into “terms and conditions around staff employment” – was unexpected, as both the Edinburgh Festival Fringe Society has resisted demands from Fair Fringe activists for harsher sanctions to be imposed on companies that exploit staff and volunteers during the Edinburgh Festival season.

A spokesperson for the University of Edinburgh commented: “We are aware that Fringe venues employ a variety of employment practices. As part of our yearly review of tenants, venues and operating models we consider amongst other things the employment practices of our tenants.

“After the last Fringe, and in light of our yearly review, it was decided not to renew the relationship with one client.

“We are comfortable that our continuing Fringe tenants satisfy our aspirations with regards to terms and conditions around volunteers and employment.”

A spokesperson for C Venues responded: “We are saddened that the arrangement between the University of Edinburgh and C venues for the festival use of Adam House has come to an end.”

“For the past 19 years the venue has been the home of many innovative performances and festival experiences. This year we will be focusing on ensuring we provide the best possible support to our visiting companies and artists, and to all our festival team members.”

In the aftermath of the university’s move, the Fair Fringe campaign yesterday singled out the Royal Society of Edinburgh, which also rents venue space to C venues, calling on the RSE to cut ties with C Venues on social media. This demand was quickly endorsed by the Unite Scotland trade union.

Now Royal Society of Edinburgh @news_RSE need to step up & not let @Cvenues operate in their buildings. To continue to support C Venues is to be complicit in their horrendous treatment of staff. #fairfringe https://t.co/i0Mpp26ZVp

Writing on Twitter, the campaign argued: “To continue to support C Venues is to be complicit in their horrendous treatment of staff.”

Speaking to CommonSpace today, an RSE spokesperson said: “We are currently considering our position in relation to our ongoing relationship with C Venues”.

“It’s very clear that C Venues in no way uses legitimate volunteering and if RSE wouldn’t treat their own staff in that way then they shouldn’t be facilitating others to do it.” Fair Fringe spokesperson

The Fair Fringe campaign confirmed to CommonSpace that, following the publication of their damning dossier on C Venues’ employment practices in January this year (based, in part, on a 2018 CommonSpace investigation), their activists contacted several other venues linked with the company, sending them copies of the report and lobbying them not to rent to C Venues, or allow them to operate in their buildings.

A Fair Fringe spokesperson told CommonSpace: “It’s disappointing that The Royal Society of Edinburgh are ignoring the problem and have refused to engage in a conversation about C Venues mistreatment of staff.

“It’s very clear that C Venues in no way uses legitimate volunteering and if RSE wouldn’t treat their own staff in that way then they shouldn’t be facilitating others to do it. We need to see RSE, and any other organisations with ties to C Venues, step up and pull their support.

The spokesperson continued: “We still need to see the Fringe Society refuse to let C Venues advertise in the Fringe Programme. Since our first meeting in the Fringe in 2017, we have been telling the Fringe Society about the problems in C Venues. We have told them stories from staff and we have sent them our report but yet they still seem to fail to grasp the seriousness of the issue.

“They have the power to dramatically improve the working conditions for people across the Fringe and we hope they stop pandering to bosses and use this power. The continued support for C Venues from organisations like the Royal Society of Edinburgh and the Fringe Society makes them complicit in the horrendous treatment of staff.”

Earlier this month, Fringe Society chief executive Shona McCarthy hit back at claims from the Fair Fringe campaign, arguing that Fringe producers and promoters were being unfairly portrayed as “evil megalomaniacs” by their activists and characterising demands that all Fringe workers be paid the Real Living Wage as unrealistic.

McCarthy said: “I just don’t think it’s the right approach. It is so aggressive and is about vilifying individual operators without actually understanding the whole landscape and sitting down and having a conversation with them.

“We’re not talking about evil megalomaniacs here. We’re talking about hard-working cultural practitioners. It’s about trying to work with people to understand their problems and challenges.”

Arguing that Fair Fringe demands that all festival workers be paid the Real Living Wage, McCarthy said: “I can’t embrace anything that just tries to impose a one-size-fits all agenda on to a Fringe landscape that is just diverse and thrives on that diversity.

“Who wants to win a Fringe First or get a transfer to a London theatre knowing your success has been built on somebody else’s exploitation?” The Stage magazine associate editor Lyn Gardener

“I have real empathy for operators and promoters. On the one hand they’re under massive pressure to keep the Fringe affordable, but on the other they’re trying to wash their faces economically. You can’t impose a Living Wage across a landscape where you’ve got everything from tiny operators and voluntary organisations where nobody is paid, to cultural entrepreneurs running businesses, but at a loss.”

The subsequent backlash to McCarthy’s comments led to a second statement, published on the Edinburgh Fringe website, which emphasised the Fringe Society’s prior meetings with the Fair Fringe campaign, and claimed the Fringe Society is “unequivocal in our condemnation of any form of exploitation.”

Responding to the C Venues controversy, Lyn Gardener, associate editor of theatrical magazine The Stage, wrote this week: “A younger generation of theatremakers are more alert to the inequalities of an industry where the most privileged thrive at the expense of those trying to get a foot in the door. Who wants to win a Fringe First or get a transfer to a London theatre knowing your success has been built on somebody else’s exploitation?”