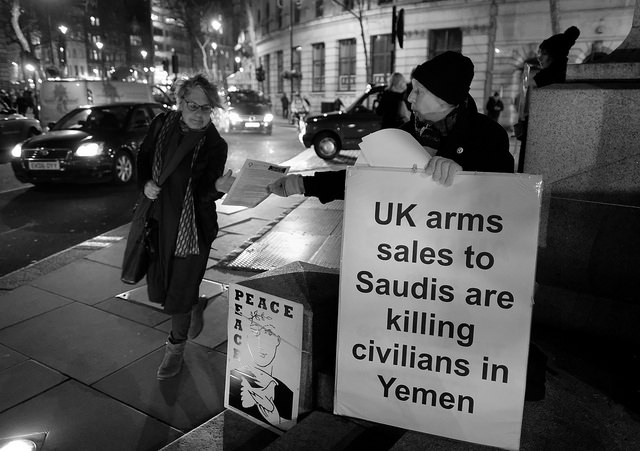 Ahead of new Amnesty report on humanitarian crisis in Yemen, former cabinet secretary says that the UK Government is “on the side of the perpetrator”

AS the Saudi-led military coalition in Yemen continues its assault on the rebel-held port city of Hodeidah, the UK Government faces fresh pressure to end its complicity in the conflict and cease UK arms to Saudi Arabia.

Hodeidah has been described as Yemen’s ‘lifeline’, with over 70 per cent of the nation’s food, imports and aid shipments moving through it. Should this lifeline be cut off, Save the Children have suggested that 340,000 people could be displaced.

Despite claims from Sulaiman Almazroui, the United Arab Emirates’ UK ambassador, that Hodeidah could be captured from rebel forces without disrupting humanitarian supply lines and endangering its 600,000 inhabitants, international observers remain less optimistic. The UN has expressed fears that the assault could spell famine for the 8.4 million Yemenis at immediate risk of starvation, as well as the 22 million – 80 per cent of Yemen’s population – who depend on aid.

Since the war began in 2015, the UK Government has licensed over £4.6 billion worth of arms to Saudi Arabia, as well as further arms sales to the United Arab Emirates and the other Arab states within the coalition.

Beyond the direct civilian and military casualties, the conflict has led to even more suffering. Research from Save the Children has found that in 2017 alone, Yemen saw the deaths of 50,000 children from hunger or disease. Collectively, the cost of the war has created what the UN General Secretary has described as the “world’s worst humanitarian crisis.”

Humanitarian and anti-war groups have repeatedly called on the UK to end arms exports to Saudi Arabia and its allies on the grounds that their continued military actions in Yemen would constitute a breach of humanitarian and international human rights law. The letter reiterates this demand, along with a call for the denial of any further arms transfer licence applications to the relevant parties, and for the UK to work with EU and US allies to make such a suspension universal via an EU arms embargo.

“All parties to the conflict have violated international law,” the letter continues. “The UK, as the Security Council ‘penholder’ on Yemen, a humanitarian leader, and State Party to the Arms Trade Treaty has a moral and legal obligation to prevent the supply of any weaponry which risks being used in Yemen as part of wider diplomatic efforts to help alleviate the catastrophic suffering of the Yemeni people.”

Commenting, Amnesty International UK director Kate Allan said: “With yet another humanitarian catastrophe looming in Hodeidah, the UK must finally turn off the flow of arms to the Saudi-led coalition in Yemen.

“It’s time for ministers to finally do the right thing on Yemen – no further arms sales to Saudi Arabia while this Sword of Damocles hangs over the entire Yemeni people.” Amnesty International UK director Kate Allan

“Rather than respond responsibly to the dreadful reality of an out-of-control Saudi-led bombing campaign, ministers have repeated their manta about ‘robust controls’ and relied on a narrow and highly technical legal ruling over the lawfulness of its arms sales to Saudi Arabia.

“It’s time for ministers to finally do the right thing on Yemen – no further arms sales to Saudi Arabia while this Sword of Damocles hangs over the entire Yemeni people.”

The letter comes ahead of a new Amnesty International report entitled ‘Stranglehold’, due to be published tomorrow [22 June], which Amnesty claims will demonstrate how the Saudi coalition has imposed excessive restrictions upon the entry of essential goods and aid into Yemen, while local Huthi authorities within Yemen have obstructed aid movement inside the country. Combined with the effects of the latest assault, Amnesty has argued, the “already dire” situation has been worsened, and international law has been violated once again.

This latest intervention follows a similar letter, published on 13 June by a cross-party group of 40 MPs, including the chairs of foreign, international development and human rights select committees, calling on Prime Minister Theresa May to condemn the assault on Hodeidah and use any and all available means to end the conflict, including “withdrawal of material support for combatants”.

On Wednesday [21 June], further pressure was applied to the UK Government by Conservative MP and former cabinet minister Andrew Mitchell, who argued that the UK’s role in the Yemen war made it complicit in a conflict that has killed nearly 10,000 people.

Noting the “reckless” Hodeidah assault, Mitchell wrote in the Guardian newspaper: “The British government finds itself not on the side of innocent families who fear the fire that falls from above, but on the side of the perpetrator”. Mitchell has called for an end to all UK support for Saudi Arabia in Yemen and voiced support for an immediate in ceasefire.

However, the UK Government looks unlikely to alter its position, affirmed earlier this month when the UK, along with the US, were instrumental in leading the UN Security Council to reject a call from Sweden for an immediate ceasefire in Yemen.

Instead, the council “urged all sides to uphold their obligations under international humanitarian law” and called for the Hodeidah port to remain open.

Karen Pierce, the UK ambassador to the UN, commented: “We make our own decisions in the security council and we make them on the basis of the British national interest including wider issues of security.”

Pierce then went on to echo a statement made by UK foreign secretary Boris Johnson earlier that week, emphasising the importance of a political settlement.

Johnson also urged all coalition-backed forces to do everything possible to ensure the safety of civilians. However, this may be ineffectual, as a United Nations expert panel has accused Saudi forces of “widespread and systematic” attacks on civilian infrastructure since the outset of the war.

“We are always being told about the influence that Downing Street carries with the Saudi regime. If that really is the case then it’s time for them to use it for good.” CAAT spokesperson Andrew Smith

Opposition to Western involvement in the Yemen war has grown steadily over the three years of the conflict, with little effect upon the relevant governments. In 2017, the High Court in London dismissed a legal challenge from Campaign Against Arms Trade (CAAT) which argued that arms transfers to Saudi Arabia should be halted because of the clear risk that the weapons supplied would be used to commit serious violations of international law.

Writing on the website of the Stop the War Coalition this week, CAAT spokesperson Andrew Smith argued: “We are always being told about the influence that Downing Street carries with the Saudi regime. If that really is the case then it’s time for them to use it for good.”