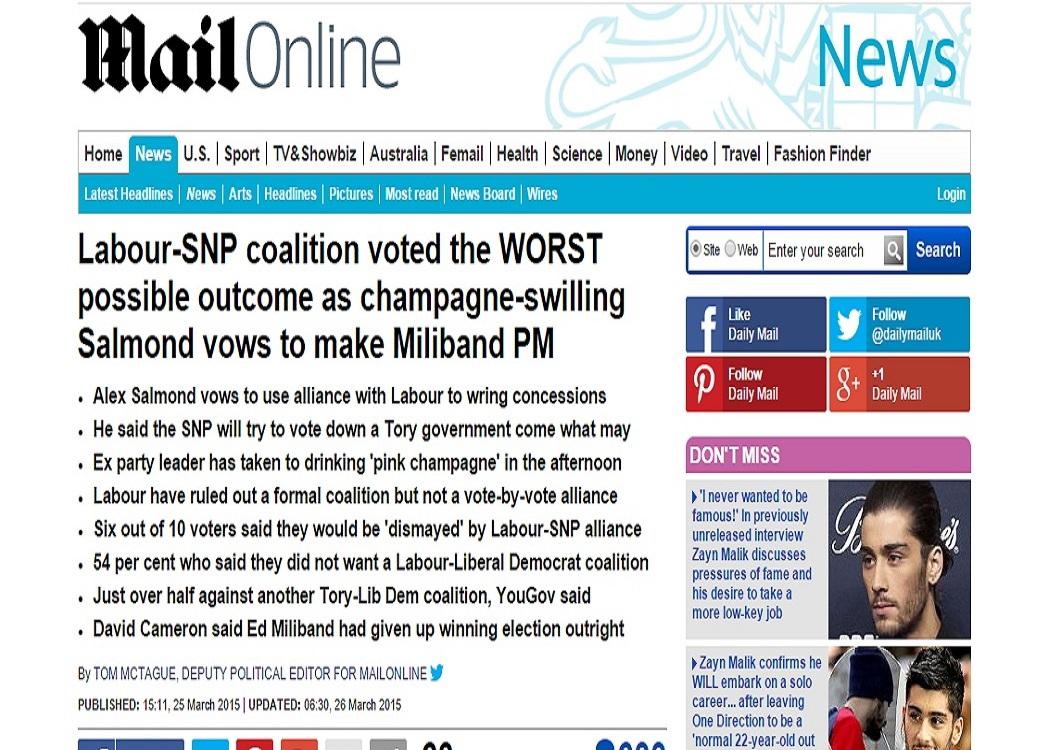 Richard McGinley, a Scot living in England with a keen interest in the changing political landscape, begins a new CommonSpace column ahead of the General Election tracking how attitudes in England are changing, and how the media is portraying matters north of the border

IF THE POLLS are correct, the Scottish National Party will hold the balance of power in Westminster after the coming General Election in May. Watching the English media, and to an extent their Scottish subsidiaries, consider this possibility can be mixture of amusement and bewilderment.

We’ve seen their tricks during the referendum for independence last year, promises, even vows, that were quickly put to one side once the security of the union was achieved.

But there’s a growing sense of alarm in the south that the problem hasn’t gone away, and the neighbours from the north are about to wreak havoc in the mother country.

But there was an undercurrent of resentment, mainly because the English aren’t that happy with their lot either, but they can’t break away.

After the narrow win for the No vote, largely on the back of promises from London, Scots have discovered that perhaps the big three parties cannot be trusted anymore, and they will be made to pay the price in May.

Scottish Labour, which in truth is no more scottish than roast beef and yorkshire pudding, faces a wipeout after apearing to sell out to its London masters. The Conservatives are largely irrelevant up north anyway, and the Lib Dems lost all their credibilty as an alternative for the middle classes when they leapt into a coalition as junior partners to Cameron.

That, in theory leaves a clear run for the SNP, which although it has its faults, is likely to emerge with enough seats to have a real say in the next Westminster government’s policy.

And down here, that is the thin end of the wedge.

I’ve lived in Staffordshire for the last 30 years or so, heading down the M6 in search of fame and fortune when I was 19, and I’ve noticed that the attitudes to Scots have changed a little.

At the time of the referendum, the general view was that if Scotland wanted to break away, it could. It was not really the business of the man in the street, although he would often throw in a disclaimer about how we wouldn’t make it on our own, and how we’d come back one day. When asked why Scotland would fail, he’d just shrug, and repeat the claim.

More often than not, people would express surprise that Scotland actually had the assets to succeed, and this surprise would grow into amazement when you pointed out where the oil came from, and adding other industries, such as whisky, video games and tourism, but still the viewpoint remained constant.

“Go if you want, but you’ll come running back.”

The media swung into action, using the same tactics that were used in the referendum. Divide and Conquer?

But there was an undercurrent of resentment, mainly because the English aren’t that happy with their lot either, but they can’t break away. Of course, Scotland considered the prospect of a breakaway, and in the end opted to stay. But it’s increasingly looking like it will be on her own terms.

And so the media swung into action, using the same tactics that were used in the referendum. Divide and Conquer?

The First Minister is forced to reassert her authority after Mr Salmond gives a series of outspoken interviews in which he sets out his plans to be kingmaker in a hung parliament.

In the latest of a series of high-profile interviews in which Mr Salmond has portrayed himself as the potential kingmaker, he said Nationalist MPs would keep David Cameron out of power even if Labour refuses to accept any of their demands.

His comments undermined Ms Sturgeon’s key campaign message that she would table huge concessions in return for supporting a minority Labour government, and that her most important “red line” was scrapping the renewal of Trident.

Instead Mr Salmond told the Spectator, while drinking pink champagne, that he would “win amendments” to future Labour Budgets, such as reducing the tax on Scotch whisky.

Oh, come on. Did we need the crack about pink champagne? But the writer deems it neccessary to show that Salmond is now behaving like royalty, and sees himself as already in a position of power.

Nicola Sturgeon isn’t daft, far from it. She knows what game they are playing, and the media may well be underestimating her, such is their fear of Salmond, who they still see as the biggest threat to the status quo. After all, he is the man who tried to break up the union.

The Daily Mail takes it a step further, implying that Salmond might not be able to say who will be prime minister, but is adamant he can decide who won’t be (click here to read in full).

EPHRAIM HARDCASTLE: Alex Salmond boasts that the SNP would make it impossible for Cameron to lead minority government

Alex Salmond’s boast to New Statesman editor Jason Cowley that the SNP would make it impossible for David Cameron to lead a minority government was made over a convivial lunch in Westminster accompanied by a bottle of pink champagne.

Salmond replied: ‘Yes.’ Cowley: ‘Your candidate there is only 20, isn’t she?’
Salmond: ‘Yeah.’ Cowley: ‘Do you know her name?’ Salmond: ‘I do, but I mean… I’m not going to insult you by going through the names of our candidates.’ Surely it wasn’t ill effects of the pink bubbly!

And there’s that pink bubbly again! This time with the added implication that Salmond is so far removed from the real world of party politics that he doesn’t even know the name of one of the candidates. A little harsh, as most people wouldn’t be able to remember the names of everyone they work with.

But to hint it’s because he’s “refreshed” is a little much. Ephraim Hardcastle is a made up name Mail journalists to use to get an editorial point of view across, a sort of man of the people speaking out for the masses.

When the piece on Salmond appeared, three out of five of his snippets concerned Jeremy Clarkson, a low brow television presenter who was fired for thumping a workmate – who, in turn, just happens to live in the same wee village as David Cameron.

Maybe I’m a cynic, but you can perhaps see why upsetting their cosy little arrangement with people who didn’t want to be a part of the union is scaring them.

– Alex Salmond vows to use alliance with Labour to wring concessions

– Just over half against another Tory-Lib Dem coalition, YouGov said

I’d love to know where they conducted this poll. In their office at lunchtime? Now it appears Salmond has taken to drinking the pink champagne every afternoon!

Thats a descent into alcoholism that would leave Brendan Beehan gazing on in admiration. Am I crediting the SNP with too much when I suggest that the plan is for Salmond to take all the fire while Sturgeon goes about the business of winning seats ?

Could two politicians possibly be working together without trying to elbow each other out of the way?

As the election draws closer, the battle for power will get dirty. well, okay, dirtier.

I’ll keep an eye out down here, and let you know what people are saying.