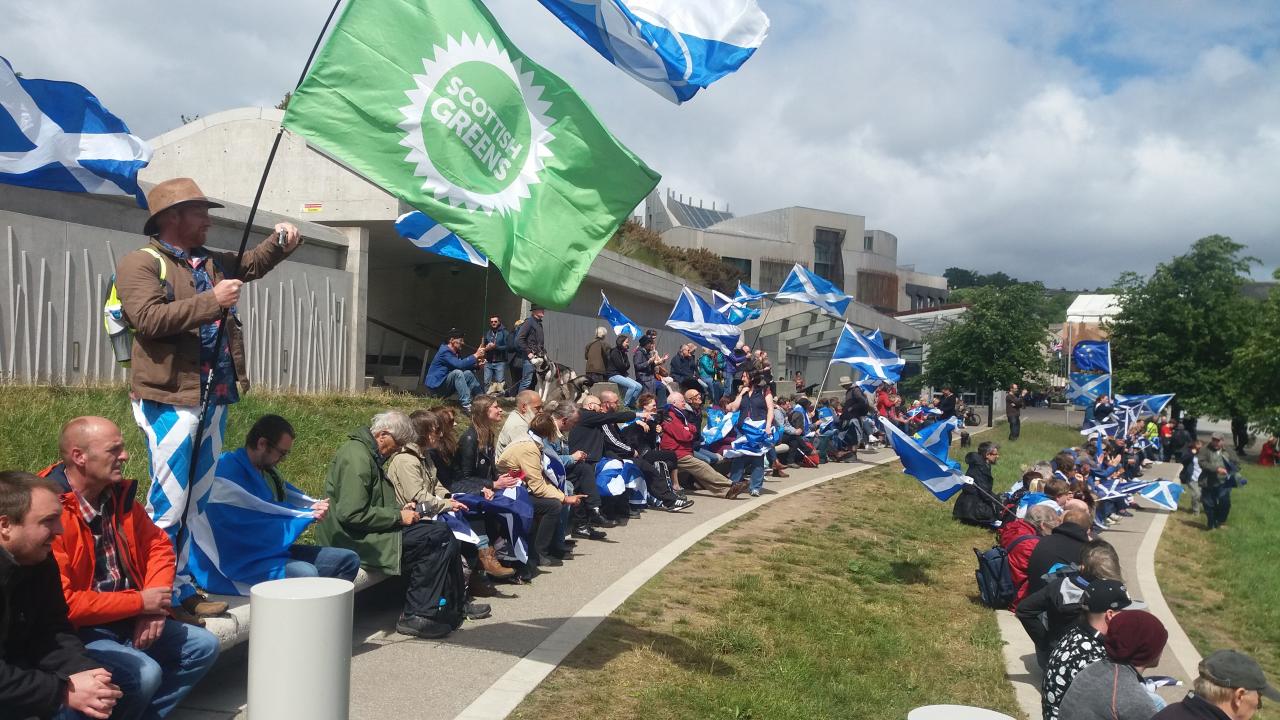 THE SNP has gained 5,085 members in the aftermath of the UK Government’s dismissal of concerns over the devolution settlement during this week’s EU Withdrawal Bill vote, it was revealed today [14 June].

The procedural protest was spurred by the seemingly irreconcilable impasse between Holyrood and Westminster over the imposition of the Brexit bill and its ‘power-grab’ upon 24 returning EU responsibilities, despite the Scottish Parliament’s near-united front in withholding consent.

The SNP has subsequently claimed that their increased membership places them on the cusp on replacing the Conservatives as the UK’s second largest party.

Since their controversial walkout – dismissed as a ‘stunt’ by political opponents – SNP MPs are now reportedly preparing to employ ‘guerrilla’ tactics and utilise arcane Westminster rules in order to frustrate the Brexit process.

Sturgeon told Holyrood: “What we saw this week was the most clear and powerful evidence so far that the Westminster system simply does not work for Scotland.

“The Tories think they can do what they want to Scotland and get away with it, but Scotland has told the Tories loudly and clearly – hands off our Parliament.” SNP depute leader Keith Brown

“The Tories plan to remove powers from this parliament without the consent of this parliament; they ripped up the convention that has underpinned devolution for nigh on 20 years; they did so in the most contemptuous way possible – with a 15 minute debate and no opportunity for a single Scottish MP to speak. And they hope that no one would notice. Thanks to SNP MPs doing their job, standing up for Scotland, people have noticed.

“People are angry. People are talking about it. People are expressing that anger in different ways. Since lunchtime yesterday, 5,085 of them have expressed that anger by joining the SNP.” 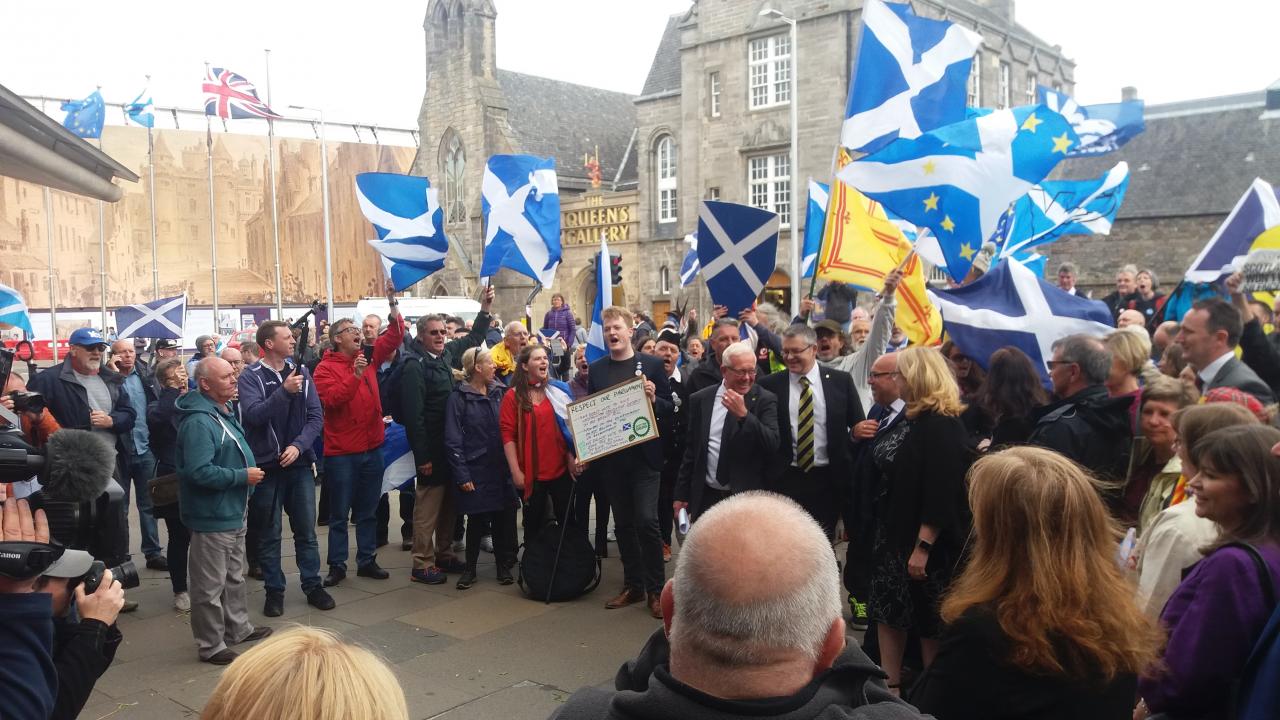 While First Minister’s Questions carried on within the Scottish Parliament, several hundred activists rallied outside of the building in protest against the Westminster power-grab.

“We’re here to protest against that, to make our views clear, and to show to everyone here and to people right across Scotland that we’re not going put up with this. It’s just not something we can allow to happen.” 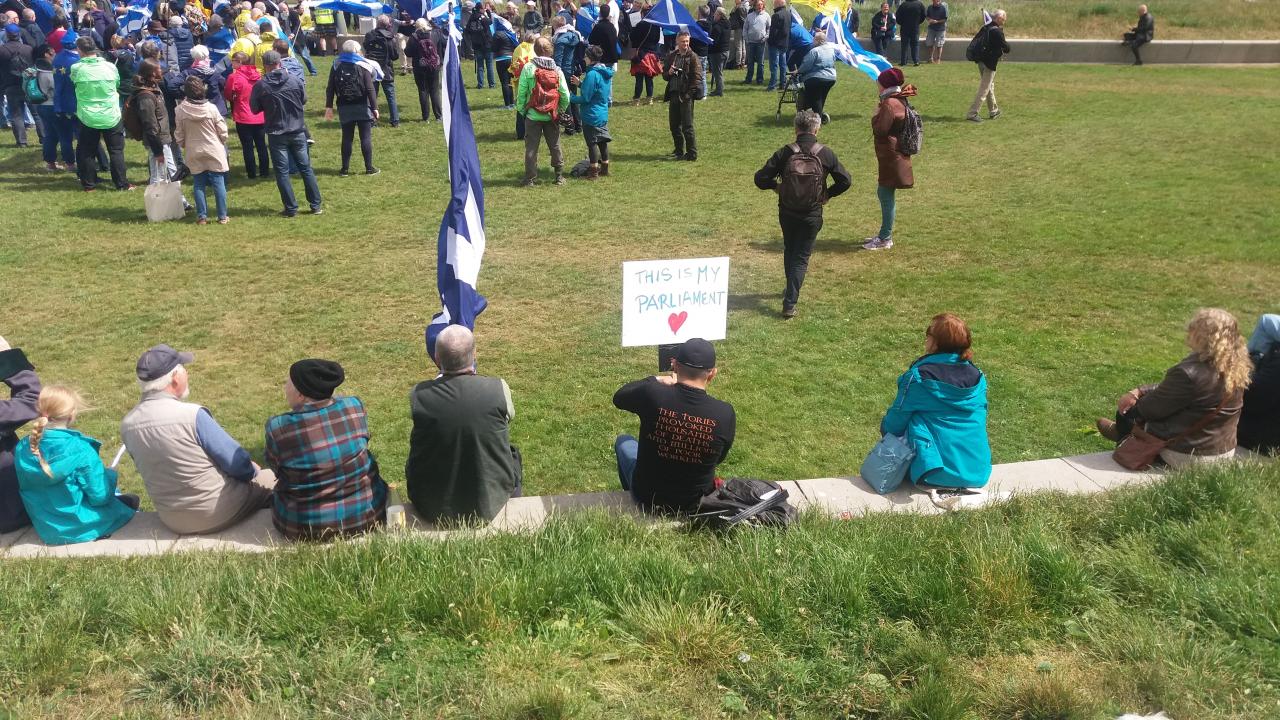 Speaking to CommonSpace, one protestor who identified himself as a member of the SNP, his local Yes group and English Scots for Yes commented that the sense of outrage over the power-grab, and the subsequent momentum it inspired within the independence movement, would continue to grow: “The march we had in Dumfries – people were expecting 500 folk to turn up at first, then maybe 2000. Then 10,000 people turned up for it.

“I think people are starting to realise that there is no status quo we can go back to – it’s either become a real country or become a county of England.”

However, Scottish Green co-convener Patrick Harvie highlighted the divisions that persist within the independence movement when he challenged the first minister to acknowledge the concerns that some of the pro-independence left have with the recommendations of the SNP’s recent Growth Commission report.

Harvie made reference to recent comments from New Zealand Green MP Gareth Hughes on the need for Scotland to look to his country’s more recent political direction under a Labour-Green coalition government, rather than the economic reforms carried out in the 1980s and 1990s.

These reforms led to an austerity agenda, which critics have argued led to a rise in homelessness, precarious working conditions and child poverty. Since September 2017 however, the new government has committed to a programme of wealth redistribution and a zero carbon emissions target of 2050.

Harvie argued: “The current constitutional crisis, and the decision by the UK Government to unilaterally abolish the principle of devolved consent, greatly increases the urgency of giving the people of Scotland control of their own future, instead of dragging them into the chaos of Brexit Britain.

“But the SNP’s Growth Commission has taken too many lessons from a right of centre economic agenda, and cannot offer the transformative alternative that is needed if we’re to inspire the people of Scotland to choose a better future.”

Sturgeon responded that the Growth Commission offered an alternative to UK austerity, and said that after Scotland became independent, Harvie and those who agreed within him could present their preferred policies to the Scottish people.