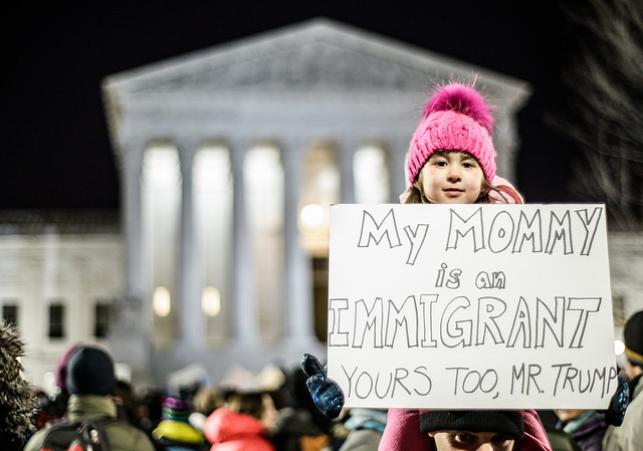 AS ACTIVISTS prepare for national demonstrations in protest against the July visit by US president Donald Trump to the UK, condemnation of the separation and detention of immigrant children by US authorities has grown to include Prime Minister Theresa May.

Facing pressure from SNP Westminster leader Ian Blackford MP during Prime Minister’s Questions today [20 July], May responded to recently revealed images of caged children in US detention centres and audio of weeping toddlers forcibly separated from their parents by stating: “This is wrong.”

May told the House of Commons: “Of what we have seen in the United States, the pictures of children being held in what appear to be cages are deeply disturbing. This is wrong. This is not something we agree with. This is not the United Kingdom’s approach.”

READ MORE: Analysis: Trump or no Trump, a Children of Men-style dystopia is upon us if we don’t change the system

However, May confirmed that Trump’s visit to the UK next month, following the upcoming Nato summit, would still go ahead, saying: “We have a special and longstanding relationship with the United States and I think it is right there will be a range of issues I will be discussing with President Trump, a range of issues about our shared interests, and I think it’s important that we make sure that when we see the president of the United States here in the United Kingdom we’re able to have those discussions that mean that when we disagree with what they’re doing we say so.”

Over the past six weeks, almost 2,000 migrant children have been separated from their families after crossing the US-Mexico border and imprisoned in detention centres, which have been compared by critics to prisons and concentration camps. Under the Trump administration’s ‘zero tolerance’ policy, all adults who enter the US by other means than an official port of entry are criminally prosecuted. While they await deportation procedures in federal custody, any children they have with them are transferred into the custody of the Office for Refugee Resettlement.

In confronting the prime minister, Blackford compared the Trump administration’s ‘zero tolerance’ policy with the UK Government’s ‘hostile environment’ policy, which was instituted under May. Blackford also challenged may to end the indefinite detention of people in the UK, the only country within the EU to do so. This includes families with children.

“While the US administration calls it ‘a zero tolerance policy’ the Prime Minister calls it a ‘hostile environment.’” SNP Westminster leader Ian Blackford

“And last night, the former head of US Immigration & Customs Enforcement said he expects hundreds of these children never to be reunited with their parents. These children will be lost in the system. Orphaned by the US Government.

“While she [Theresa May] condemned the policy of separating children from their parents – she failed to say if her government had made such representations to the U.S administration.

“But then, on immigration, while the U.S administration calls it ‘a zero tolerance policy’ the Prime Minister calls it a ‘hostile environment.’

“We know this UK Government detains children in detention centres here in the UK and the UK is the only EU country to detain people indefinitely.

“The Prime Minister should not be rolling out the red carpet for Trump. And today – on World Refugee Day – she must show some leadership and end her policy of indefinite detention.”

“The most recent move involving the separation of displaced children from their parents is not only barbaric and deeply immoral, but is in direct contravention with the Convention on the Rights of the Child.” Marta Welander, Refugee Rights Europe executive director

Further condemnation of the Trump administration policies has come from Scottish and UK refugee advocacy groups, many of which joined in marking World Refugee Day today.

In light of the latest controversies concerning the consequences of US immigration policy, Pauline Diamond Salim, media manager at the Scottish Refugee Council, told CommonSpace: “It’s hard to process just how hateful this is. It’s hard to feel much hope at all in the face of such hostility and aggression towards people seeking refugee protection –  in the US, internationally and here at home within the UK’s asylum system.

“When refugee rights are jeopardised everyone’s rights are at risk. Trump said something like – without borders, a country is not a country. The best I can say in response is to echo Amnesty International’s reply: without human rights there is no humanity.”

Marta Welander, executive director of Refugee Rights Europe, also told CommonSpace: “The Trump administration’s overall approach to refugee and immigration issues is deeply disconcerting. The most recent move involving the separation of displaced children from their parents is not only barbaric and deeply immoral, but is in direct contravention with the Convention on the Rights of the Child (CRC).

“Although the US has failed to ratify the CRC, these are fundamental child safeguarding principles that should be upheld by all nations and the violation of these rights must under no circumstances be justified through arguments of ‘home land security’.

“We strongly condemn the Trump administration’s refugee and immigration related policies and stand in solidarity with rights groups working across the US within an increasingly hostile climate.”

The widespread outrage, both in the United States and internationally, over the separation and detainment of children will likely add fresh momentum to the planned protests against Trump’s UK visit, where he is expected to come to Scotland to play golf.

Scotland United Against Trump, a coalition of trade unions, political parties, and equality, faith and civil society campaign groups have organised demonstrations in Glasgow and Edinburgh – on 13 and 14 July respectively – to coincide with the presidential visit.

Those involved in the coalition include the SNP, Scottish Labour, the Scottish Greens, the Scottish Socialist Party and RISE, as well as the Scottish Trade Union Congress, Amnesty International, Global Justice Now, Jubilee Scotland, the Muslim Council of Scotland, Common Weal, Stand Up to Racism, the Scottish branch of Stop the War and the Radical Independence Campaign.

Kirsty Haigh, a representative of Scotland United Against Trump, commented: “Trump likes to talk up his Scottish connections – but we are going to show that his politics are not welcome here. A growing coalition of organisations and campaigns are coming together to say that Scotland will stand united against Trump.

“Over the next month, we’re going to be building support for two massive days of actions with a rally in Glasgow and national demonstration and festival in Edinburgh. We will also send a message to the Tory government that we will not tolerate their pandering to Trump.”

Haigh added: “Trump’s policy of separating children from their parents is brutal, inhumane and we need to do everything we can to stop this horrific abuse of power. No child should be taken from their parents at the border, no-one should be locked up for searching for a better life and no human is illegal. Make it clear that you won’t stand for these abhorrent politics and join us protesting Trump’s visit.”

On 13 July, a similar national demonstration organised by the Stop Trump coalition will take place in London.

Speaking on behalf of Stop Trump coalition, Shaista Aziz said: “Donald Trump and Theresa May are running scared of protest. Last year. hundreds of thousands took to the streets at barely a day’s notice in disgust at Trump’s Muslim Ban. If Trump actually comes to London, we could be looking at a march of millions. This won’t just be a movement against the President’s visit – it will become a movement against racism, anti-migrant bigotry, sexism, transphobia and far right politics in the UK.”

“The Windrush scandal has shown this isn’t just about Trump. It’s also about Tory Britain. Our protest is an opportunity for millions to say, ‘enough is enough’.”