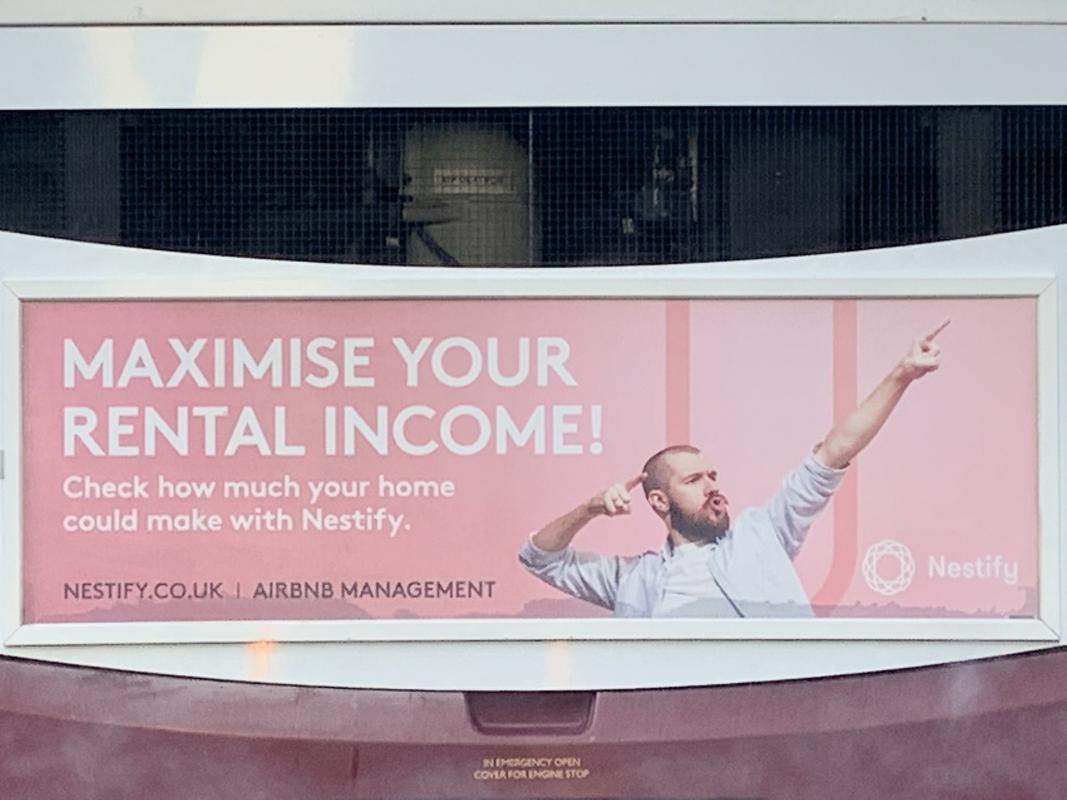 AIRBNB management service Nestify has recently launched an advertising campaign on Lothian Buses, encouraging landlords to consider short term lets, which feeds the narrative that tenants are disposable, and that profiteering from property is more important than providing long term homes.

One of the biggest schemes Edinburgh Council runs is the private renting scheme, which deals with properties from the private rented sector. In previous years, the council had 1,700 properties, but then the number of available properties dropped to 1,300. This means that when those accommodations go down, the bed & breakfasts go up, along with the associated cost.

Also in previous years, it used to be attractive to landlords who may have been unable to sell but they had assured rent, but since short term lets have become more popular and attractive where they generate a far bigger income, there is clear competition in the private rented market over the last few years, which impacts house and rent prices.

More people are becoming homeless because they simply cannot afford to pay the rent or mortgage. To highlight how unaffordable housing and in-work poverty is in Edinburgh, according to Council figures, 30 per cent of people in temporary accommodation are working. This is utterly and immensely ridiculous.

Yet we have Lothian Buses, a public-run transport infrastructure, promoting companies like Nestify who are actively exacerbating the housing crisis in Edinburgh; not to mention, the ad is an immense insult to tenants living in one of the least affordable places in the UK, with many struggling to afford to rent a home – never mind buy – and who live in fear of being kicked out at short notice to make way for short term lets.

The Scottish Government has reported that between 2010 and 2018, the average rent for a two-bedroom property in Lothian increased by 42.3 per cent, more than double the average rate of increase in Scotland, at a time when the incomes of low earners have hardly risen in real terms.

Meanwhile, a buy-to-let index published earlier last June by comparison site Totally Money revealed Edinburgh was the fourth best city in the UK to be a buy-to-let landlord, with the margin between the mortgage cost and rent cost securing returns of over 10 per cent in the area around Holyrood Park, while Dalry, Merchiston, Gorgie and Sighthill secured yields for landlords of 8 per cent on average, and Corstorphine closely behind on 7.9 per cent. Can you imagine the yields for short term let landlords?

Questions need to be asked regarding why a public-owned transport company in Edinburgh is willing to promote these kinds of ads, and not local organisations with the same ambitions as Edinburgh Council to fix the housing crisis.

There is precedent – a successful campaign in London run by Generation Rent, who also worked together with Transport for London, resulted in new guidelines recently being announced, banning all short term let adverts.

Transport for London’s new policy, which Edinburgh Buses/Transport should consider adopting, states that any adverts seen to do the following would be banned from the network:

To add your voice, please sign the petition to effect change and send a message to Edinburgh Council and Lothian Buses.