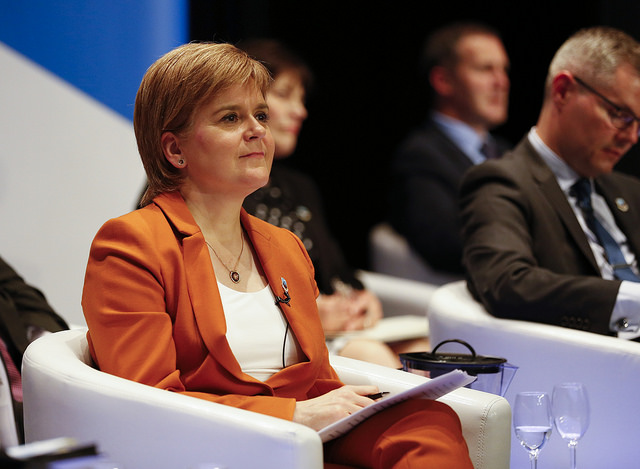 CommonSpace speaks to campaign groups, think tanks and third sector organisations about their hopes for the Scottish Government’s agenda

WITH the new Programme for Government set to be unveiled tomorrow [4 August], expectations are mounting following First Minister Nicola Sturgeon’s claim that the agenda-setting document will contain “significant” new announcements.

The Scottish Government will bring forward 12 bills over the next 12 months, and has promised a “raft of new announcements” on the economy, mental health and social security in this year’s programme, entitled ‘Delivering for Today, Investing in Tomorrow’.

With heightened political tension in the party over the Salmond sexual harrassment allegations, the political need for a positive and well received Programme for Government is high.

But what does Scotland need from the Programme for Government? CommonSpace spoke to experts across civil society about what they want to see in First Minister Nicola Sturgeon’s speech tomorrow.

It is expected that the Scottish Greens will press for some significant movement on local tax reform, as the party has signalled it will not support the next Scottish budget proposed by the minority SNP administration without it.

Following yesterday’s publication of a poll commissioned by the Scottish Greens showing that almost two thirds of respondents support local authorities being granted more powers to raise their own funding, Green co-convener Patrick Harvie commented: “Green MSPs have warned that after two years of reversing proposed cuts to local councils we cannot enter talks about the next budget unless there is movement on local tax. The public are with us on this. The ball is in the Scottish Government’s court.”

The need for local tax reform was also emphasised by Robin McAlpine, director of the Common Weal think tank, who told CommonSpace: “More investment needs to go into local areas in Scotland and that needs more resource. Replacing the Council Tax with a Property Tax which taxes both buildings and land could raise significant sums without the overall burden on households increasing. But Scotland needs to give real power back to its towns and villages so a new system of genuinely local democracy which gives them that power would let people improve their own communities.

Elsewhere on the policy agenda, McAlpine said that “a much more ambitious housing agenda would be very popular with everyone apart from the big commercial developers and high-quality public rental housing for people like young professionals or families who don’t want to be trapped in mortgages could change lives.

“The government needs to get the childcare roll out right, make both the National Investment Bank and National Energy Companies bold and ambitious, follow through on the national Infrastructure Company and it needs to bite the bullet and back down on its school testing agenda, which now faces majority opposition in the Parliament.”

Further hopes regarding housing policy were voiced by Sarah Boyack, head of public affairs for the Scottish Federation of Housing Associations, who told CommonSpace: “We’re half way through the term of this Scottish Parliament and while the headline investment in 50,000 homes is crucial to deliver on housing needs, it’s important we don’t forget about investing in existing homes too.

“We’re keen that legislation on planning, fuel poverty and fire safety is informed by the experiences of housing associations and tenants. But we also need to see support for tenants, whether it’s through mitigating the impact of welfare changes, support to help people sustain their tenancies and investment in adaptations that will help maintain people’s health and well-being.”

Graeme Brown, Director of Shelter Scotland, also expressed concern about current housing, telling CommonSpace: “Our main calls for the Programme for Government would be a new common quality standard for all housing, enforceable standards for temporary accommodation and better analysis and reporting of current housing programmes.

“At the heart of our national housing emergency is a lack of social and affordable housing, so we would want to see a commitment and plans for the delivery of enough social housing in Scotland to meet demand, now and beyond the lifetime of this Parliament.”

Wider concerns over the extent of poverty and inequality in Scotland were expressed by Neil Cowan, policy and parliamentary officer for the Poverty Alliance. Speaking to CommonSpace, Cowan said: “One million people in Scotland are living in the grip of poverty. So it is essential that the Programme for Government builds on the progress made in tackling poverty in the last parliamentary year – including the passing of the Child Poverty Act and Social Security Act, as well as the publication of the Scottish Government’s child poverty delivery plan – by implementing actions that create a more just society and an economy that works for everyone.

“A renewed focus on boosting incomes and reducing costs is vital, so it is important to use the new social security system to ensure adequacy of support for social security claimants, as well as take steps to reduce transport, housing, childcare and other costs for people experiencing poverty.”

Russell Gunson, director of the progressive nonpartisan think tank IPPR Scotland highlighted the need for the programme to contain strong economic policy: “Clearly Brexit hangs over Scotland as it does the UK as a whole. But in many ways, the biggest challenge facing Scotland, regardless of Brexit, is how we deliver a stronger and fairer economy. That’s a challenge that predates the EU referendum and it’s one that will be there regardless of what happens in terms of our relationship with the EU.

“Increasing productivity will be key to delivering the more inclusive economy we want to see. We hope to see a focus on boosting productivity and tackling low pay in the Programme for Government, and significant measures that can help to restructure the Scotland economy to place delivering justice at its core.

Gunson continued: “Looking to the near-future Scotland also faces significant changes that will be brought by automation, technological change and ageing. We need to step up our investment now, and find new ways to boost investment from business, to embrace new technologies across the economy and get ready for what will be a far older population in Scotland over the coming years.”

READ MORE: Economy debate at #SNP18: ‘If we don’t have our own currency we are at the mercy of the banks,’ Kerevan says

More radical suggestions for the Scottish economy were proposed by the pro-independence think tank Business for Scotland, with BFS’s Michelle Rodger writing in a blog published today: “We would like to see the Scottish Government taking the lead in developing a commonly owned Blockchain system (originally designed as an incorruptible ledger for the digital currency Bitcoin, Blockchains allow information to be stored across multiple computers in a distributed network that is providing the backbone for a new more secure Internet).

“The Scottish Government should launch its own digital currency running alongside Sterling and facilitate local digital currencies. Blockchain-based security is almost impervious to hacking and identity theft and reduces cost by eliminating transaction fees. This digital currency would not replace a sovereign currency, but access to a safe and Government-guaranteed form of electronic money without the need for high street banks would be highly beneficial to the Scottish economy.

“The Scottish Common Blockchain would also enable secure online voting and encourage democratic participation amongst the young. Just as postal voting helps old folks vote, secure instant mobile voting will encourage younger generations to have their voice heard. If young people aged 16-25 voted as often as those over 50 then everything would change.”

Ahead of the programme’s release, the Scottish Government has already faced calls for the abuse of vulnerable people to be made a statutory aggravating offence in law by the charity Action on Elder Abuse Scotland, which has estimated that roughly about 100,000 pensioners in Scotland have experienced some form of abuse each year.

The charity has argued that the recent review of hate crime laws in Scotland conducted by Lord Bracadale has laid the groundwork for change in this area, as the review’s recommendations called on Scottish ministers to consider a general aggravation covering exploitation and vulnerability. Lord Bracadale himself also concluded that a new statutory aggravation should be created based on “age hostility”.

These recommendations were also endorsed by the anti-sectarianism charity Nil By Mouth. Speaking on behalf of the group, David Scott told CommonSpace: “We’d like to see legislation brought forward based on the recommendations of the Bracendale Review into Hate Crime in Scotland.”

Following recent controversies over the Scottish Government’s relationship with the arms manufacturer Raytheon, Andrew Smith of the Campaign Against Arms Trade (CAAT) told CommonSpace that “the Scottish Government should investigate how much money Scottish Enterprise has given to companies that are complicit in war and human rights abuses, and put a stop to it.”

He added: “Instead it should also focus on job diversification and promoting other areas of engineering and alternatives to Trident and the arms trade. Particularly with the backdrop of Brexit, and the possibility of another independence referendum on the horizon, it’s time to seriously consider what an ethical foreign policy looks like, and the role that the Scottish Government can play.”

Meanwhile, Scottish SPCA Chief Superintendent Mike Flynn focused on the abiding goals of his organisation, telling CommonSpace that they welcome the “introduction of a modern system of registration, tackling the illegal puppy trade and licencing of animal sanctuaries.”

Flynn added: “There are also currently a number of Bills being proposed to the Scottish Government by MSPs that we fully support which would greatly impact the pet trade and animal welfare, including a proposed Bill from Christine Grahame MSP aiming to stop irresponsible dog breeding and another from Jeremy Balfour MSP involving updated regulation of pet shops.”

Sheila George, Food and Environment Policy Manager at WWF Scotland, called on the Scottish Government to fulfil one of its earlier promises, arguing to CommonSpace: “A Good Food Nation Bill, drawing together and providing a legislative framework for all aspects of the Scottish Government’s work on food and drink, was a commitment in the SNP 2016 manifesto. However, subsequent commitments to consult on a draft Bill have not yet been met.

“We look forward to seeing the delayed Good Food Nation Bill amongst the 12 new Bills to be announced in the Programme for Government tomorrow, reaffirming the Scottish Government’s commitment to delivering a world-class, sustainable food system.”