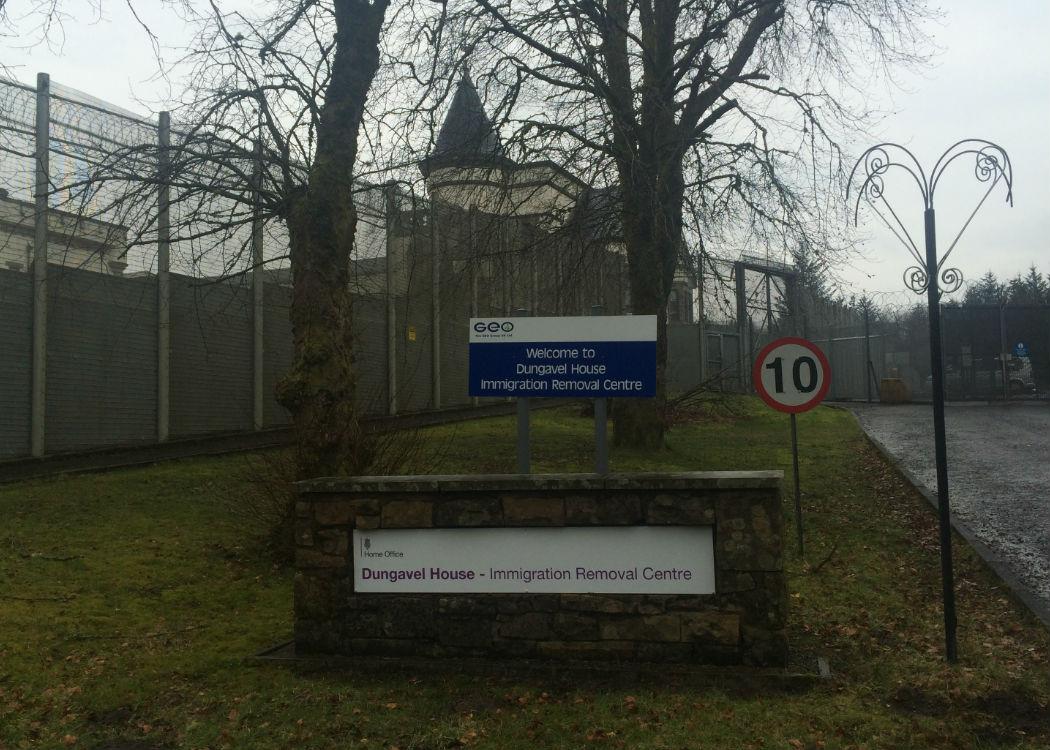 DOZENS of migrants have been on hunger strike for over a week at a controversial detention centre in Scotland.

Detainees, most of whom are asylum seekers, at Dungavel Immigration Removal Centre (IRC) have been protesting conditions and demanding a time limit on how long people can be detained.

Up to 70 people initially took part in the action but numbers involved are since believed to have dropped to around 25.

The strike at Dungavel is the latest in a wave of actions in detention centres across Britain as the UK government’s detention policy comes under heightened scrutiny.

The Scottish Government said that it found the situation “deeply concerning”.

“We are far away from our families and people are cramped into rooms. It’s eight to a room and 16 people need to share the same toilet.” Steven, asylum seeker

A spokesperson said: “It is deeply concerning that anyone should be on hunger strike at Dungavel.

Detainees have been documenting their experiences on the ‘Detained Voices’ blog and have spoken of threats and intimidation from guards at the centres.

One detainee taking part in the strike said: “I’m not eating and the officers are telling me they are going to move me from Dungavel. They say that to everyone who is doing protest. They are trying to scare us.”

SNP MSP Sandra White said: “That people are resorting to these desperate measures is a damning indictment of some of the absolutely shameful practices employed at Dungavel – and shows exactly why we need a new direction when it comes to asylum and immigration policy.

“This episode is a depressing reminder that Westminster has too often shown scant regard for the rights of people detained at Dungavel – so it should come as no surprise that some of these people feel they have no other option but to resort to measures like this.

“It is deeply concerning that anyone should be on hunger strike at Dungavel.” Scottish Government

“The UK is the only country in the EU which has no cap on how long people can be detained under immigration powers.

“It is time for a new approach which prioritises compassion and fairness over punishment and isolation – helping those who seek asylum to more easily integrate into our communities and allowing our national life to benefit from their skills and their culture.”

Dozens of asylum seekers at Dungavel have been held there for months, with some spending over a year in detention.

In addition to calling for a time limit, detainees at Dungavel say that they are also protesting the conditions – such as eight people being forced into one room – and the fact that they are placed far from their friends and family.

Around 80 per cent of detainees at Dungavel were taken from the London area and the distance and expense involved means that they receive few visitors.

A demonstration in solidarity with the detainees took place at Dungavel on Sunday and one of the hunger strikers, Steven, said that they could hear it inside.

“Our message is simple: We want them to put a time limit on how long people can be detained.

“If they don’t deport someone within 28 days then they should bail them out and they can report back.

“We are far away from our families and people are cramped into rooms. It’s eight to a room and 16 people need to share the same toilet.

“The way that people are being locked up is simply unjust – it’s inhumane.”

Steven said that one of the hunger strikers at Dungavel had to be taken to hospital for treatment and most detainees are staying in their room because they are weak.

“People are starting to lose weight,” he said.

“Many have been incarcerated without time limit for months or years behind the razor wire, and at great cost to their mental health.” Jerome Phelps

“The officers have said that they will move those taking part in the hunger strike. But they have nowhere to move us to as this is taking place across the country.

“We have only our bodies to fight with and we hope people on the outside can hear us.”

Earlier this month, a committee of MPs recommended that immigration detention should be capped at 28 days.

Campaigners have called on the government to implement the time limit as a matter of urgency.
Jerome Phelps, director of Detention Action, told CommonSpace that people in detention centres “feel like they have nothing to lose”.

“Many have been incarcerated without time limit for months or years behind the razor wire, and at great cost to their mental health,” he said.

“The UK is unique in Europe in detaining migrants indefinitely. Earlier this month a parliamentary inquiry found that the detention system is ineffective and unjust, yet migrants are still being locked up, with no idea when they will be released.

“The government must act now to implement the inquiry’s recommendations and introduce a 28-day time limit on detention.”

Asylum seekers and other migrant groups are held in immigration detention in attempt to enforce their removal from the UK or while their case is being assessed by the Home Office.

Among the detainees are ‘stateless’ people and people from countries which it can be very difficult to enforce removal to.

Dungavel, near Strathaven in South Lanarkshire, was opened in 2001 and is the only IRC in Scotland.

The Scottish Government has previously called for the facility to be closed and pledged to ban immigration detention in an independent Scotland.

(With additional reporting from The National – click here to read.)