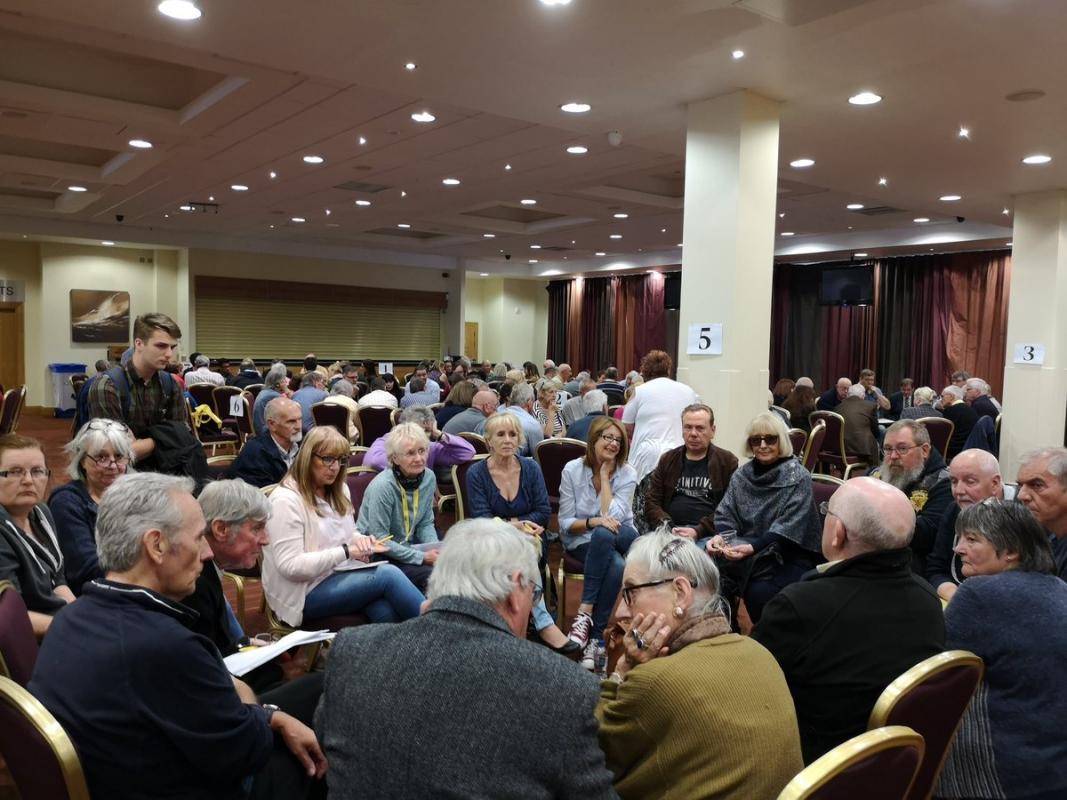 THE FIRST SNP members meeting to discuss the party’s Sustainable Growth Commission (GC) report has heard criticisms from members calling for an independent currency and an anti-austerity economic policy.

The first of three National Assemblies was held in Ayr on Saturday [25 August], using participatory methods to discuss a broad range of economic matters and will be followed by meetings in Aviemore and Edinburgh on a similar structure. It was headed by Growth Commission member Professor Roger Mullin and SNP depute leader Keith Brown.

Many independence supporters were critical when the GC, chaired by former MP and corporate lobbyist Andrew Wilson, launched its report in May this year. Titled “Scotland – the new case for optimism”, the report argued for Scotland to keep using sterling informally and tight restrictions on public spending for a decade following independence, a fiscal policy which the Institute for Fiscal Studies and Common Weal think-tank have described as an austerity agenda.

Speaking to CommonSpace Nick Durie, a member of SNP Maryhill branch who attended the event at Ayr Racecourse, confirmed that there was opposition from SNP members in attendance at the event to aspects of the GC.

“…during the opening plenary ‘ice breaker’ opposition was voiced to the currency proposals of the growth commission,” Durie said. “The speaker received a clap and echoes of support.”

He continued: “A number of [attendees] made clear their opposition to the use of the Gers [Government Expenditure and Revenue Scotland] figures as a means of assessing the country’s economy or prospects. Others focused on the currency question, and in the end two groups formed to discuss this.

“They arrived at very different conclusions, demonstrating the division between party members on this question. No vote was taken to assess which view was more popular.”

Durie also highlighted other debates at the Assembly, including on council housing and green re-industrialisation

“One colleague hosted a conversation on the need to secure more council housing, drawing distinction between this and housing associations, and citing this as a key driver of the economy.

“I hosted a conversation entitled ‘How can we reindustrialise our economy and fight climate change if we are reducing public spending and reducing public borrowing to bring down the deficit’ – as those colleagues criticising Gers demonstrated, the fiscal conservatism I was critiquing is largely a fiction based on Westminster accounting.

“Our group found that the Scottish Government does not have full policy alignment to achieve reindustrialisation and the [European renewable energy] super grid, and we called for a Scottish state explicitly to spend public money and use the public sector to drive investment and that without such economic stimulus we would be unable to secure the benefits of a mixed economy in driving growth in the sector.”

Durie said the format of the meeting – which split attendees into smaller groups with no clear mandated points for discussion or decision – did not lend itself well to addressing disagreements.

He said: “When we gathered together again and reported our findings, these were drawn onto a giant flipchart, but while many of the comments were critical we did not have the ability to challenge members of the growth commission, put motions or really mandate anything in particular.”

Robbie Mochrie, an associate professor of economics at Heriot Watt University who also attended the meeting, described in the National the reaction of many SNP members at the assembly in Ayr to the Growth Commission.

He said: “There were many people who were dismayed by the adoption of Gers as a baseline for Scotland’s fiscal state, the willingness to rely on sterling as Scotland’s currency for an extended period, and the degree to which the report is written for specialists, with narrowly technical, repetitive writing and impenetrable analysis.”

Participants were encouraged to write down their aspirations for economic policy in an independent Scotland on boards. 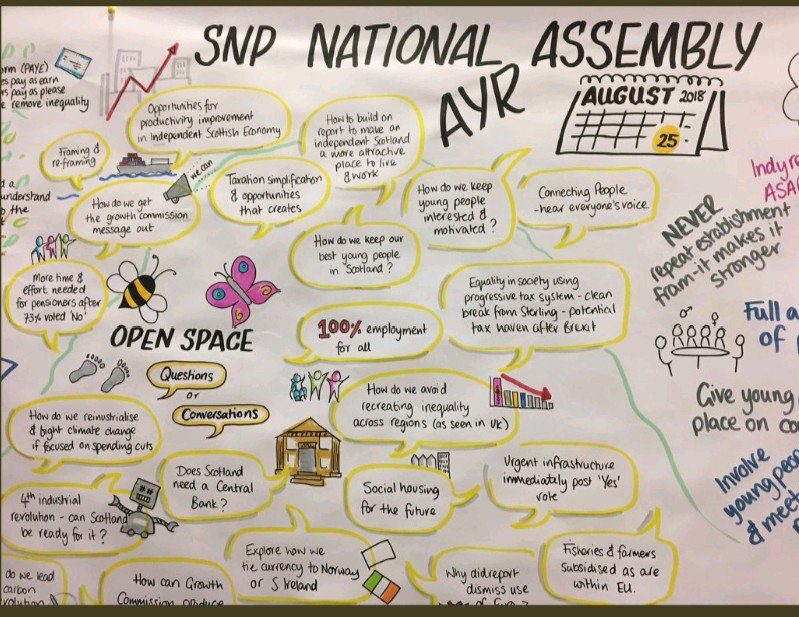 Some of the ideas posted on boards included:

“How do we reindustrialise and fight climate change if focused on spending cuts?”

“Social housing for the future.”

“How we avoid recreating inequality across regions (as seen in UK)?”

Read more: The currency debate that won’t be heard at SNP conference

Other SNP activists praised the participatory and optimistic mood of the meeting, and looked forward to the two further meetings. Brown said: “Each event will put the ‘why of independence’ front and centre as people in Scotland seek an alternative to the doom and despair of a no deal Brexit.”

In an article on the SNP website Brown once again asserted that the National Assemblies would allow members “to discuss and develop policy before it is presented to National Council or National Conference for approval.”

Pressed by CommonSpace on whether this meant that key debates might not be debated and decided on the conference floor, an SNP spokesperson said: “We are holding three major events this autumn to discuss the growth commission report in detail.

“Any big debates that may arise from these will be discussed at our Spring Conference in 2019.”

Last week, the Common Weal launched a campaign for a Scottish currency, which seeks the establishment of a new currency from the first day of Scottish independence after a period of negotiations, which the leftwing pro-independence think tank believe will take around three years.