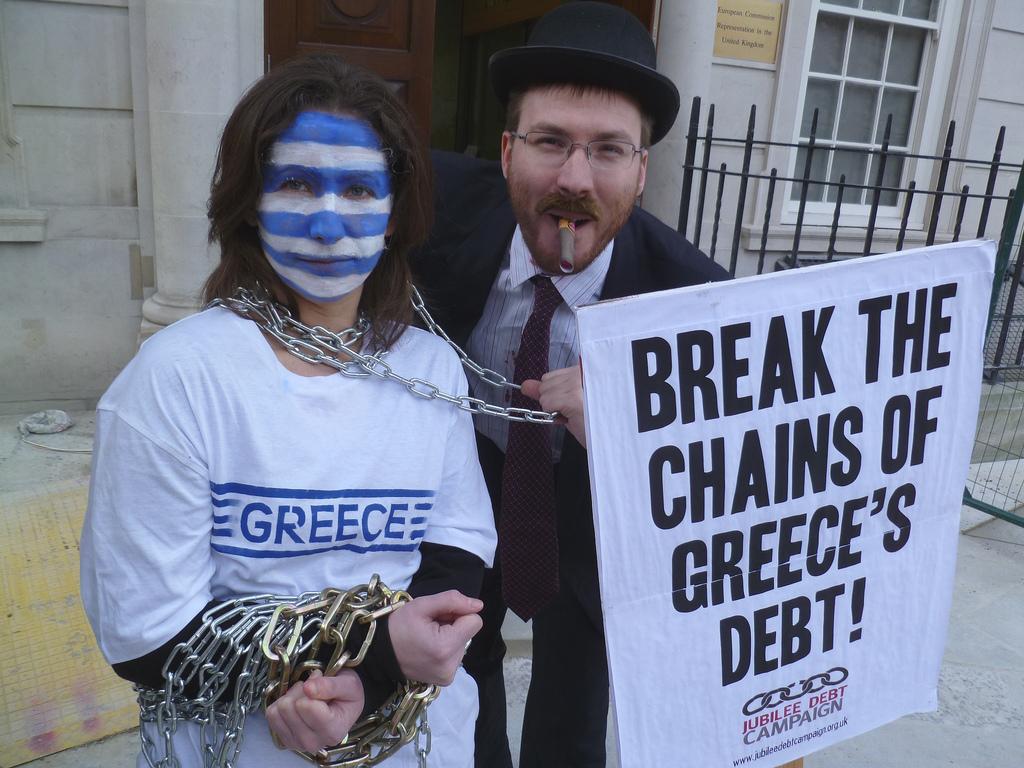 Debt justice campaign, MSP and Scottish government economic adviser all support the idea that a resolution based on writing off some of Greece’s debt is necessary for economic stability and growth.

JUBILEE Scotland, a debt justice campaign group, has called on the Scottish government to show solidarity with Syriza’s debt write off plea by supporting its proposal for a high-level international debt conference.

Syriza, the leading party in Greece’s new anti-austerity coalition government, proposes that two-thirds of the country’s debt, which has risen to PS240bn, should be struck off in similar fashion to West Germany in 1953, where half of the country’s debt was cancelled at ‘The London Agreement’ by states and international creditors. The deal is widely considered to be a crucial part of Germany’s revival in the world economy after World War II to its current position as a global industrial powerhouse.

Additionally, the Scottish government supported a motion in November 2014 proposed by Jean Urquhart MSP to become “an international centre” for debt arbitration, including backing the UN’s ‘debt workout’ process, agreed by the UN General Assembly in September 2014.

“The people of Greece have asked for our help; I’d be disappointed if Scotland failed to answer.”

Jean Urquhart, independent MSP for the Highlands and Islands, backed Jubilee Scotland’s call, saying the Scottish government “can and should offer Scotland’s solidarity with the people of Greece by joining Syriza’s call for an international conference on Greece’s debts”.

“The people of Greece have asked for our help; I’d be disappointed if Scotland failed to answer,” Urquhart added.

The Jubilee Debt Campaign has carried out extensive research on Greece’s debt, and found that just 10 per cent of bailout loans have gone towards the Greek population. The vast majority has been used to pay banks and international creditors. EUR42.7bn of Greek government debt payments, nearly one-third, has gone towards paying back interest on the loans. Seventy-eight per cent of Greek debt is owed to ‘The Troika’: the European Union, International Monetary Fund and European Central Bank.

As Tim Jones, author of the research, surmised: “The bailouts have been for the European financial sector, whilst passing the debt from being owed to the private sector, to the public sector.”

In an open letter to the Financial Times, a throng of world leading economists, including Scottish government economic adviser and Nobel Prize winning economist Joseph Stiglitz, supported the idea of debt relief for Greece, stating that “the whole of Europe will benefit from Greece being given the chance of a fresh start”.

The letter argued that conditions could be put upon the Greek state paying some of the debt back, like growth of at least three per cent, and recovering 50 per cent of GDP lost since 2008.

“Precedents for this include the ‘bisque’ clause in the UK loan from the US negotiated by J M Keynes after the Second World War, where the UK did not service the debt until the economy met agreed conditions,” the authors added.

Mumford told CommonSpace that while campaigning against unjust debt in the global south remains their main priority, there are “key similarities” between the Greek situation and third world debt which has been a contributing factor to persistent underdevelopment.

“The scale of the crisis is different purely because of the relatively developed state of Greece, but the basic principles remain the same,” Mumford argued. “One of the interesting things is that the Eurozone crisis mirrors almost perfectly the South American and sub Saharan African debt crises, but due to the impact on the Euro, Greece is in a much stronger position to negotiate a fair settlement.”

“One of the interesting things is that the Eurozone crisis mirrors almost perfectly the South American and sub Saharan African debt crises.”

Leaked minutes of an IMF board meeting in 2010 on plans for a Greek bailout agreement showed that many Latin American countries were well aware from their own experience of the consequences Greece would be facing if the country agreed to the proposal. Argentina, which suffered a debt crisis in 2001, stated in the meeting that “debt restructuring should be on the table”.

Brazil went further, stating the IMF loans “may be seen not as a rescue of Greece, which will have to undergo a wrenching adjustment, but as a bailout of Greece’s private debt holders, mainly European financial institutions”.

Mumford agreed with this prognosis: “Debt can be used by creditors as a rationale for ideological cuts, and it is important to recognise this. Countries have been forced to prioritise debt servicing above all other spending, leading to huge lack of investment in public services.”

Mumford said that the Greek situation “highlighted what debt campaigners across the world have been saying for decades – that we need a fair and transparent debt workout process.”

A Scottish government spokesperson responded to Jubilee Scotland’s plea to support Syriza’s proposal, telling CommonSpace: “We note the result of the Greek election, which is an internal matter for the people of Greece, and it is important that this democratic decision is respected.

“In terms of the wider issues involved these need to be taken forward through dialogue between the Greek government and other EU member states. The Scottish government will continue to play a full and constructive role in helping drive economic recovery and growth across Europe and beyond.”