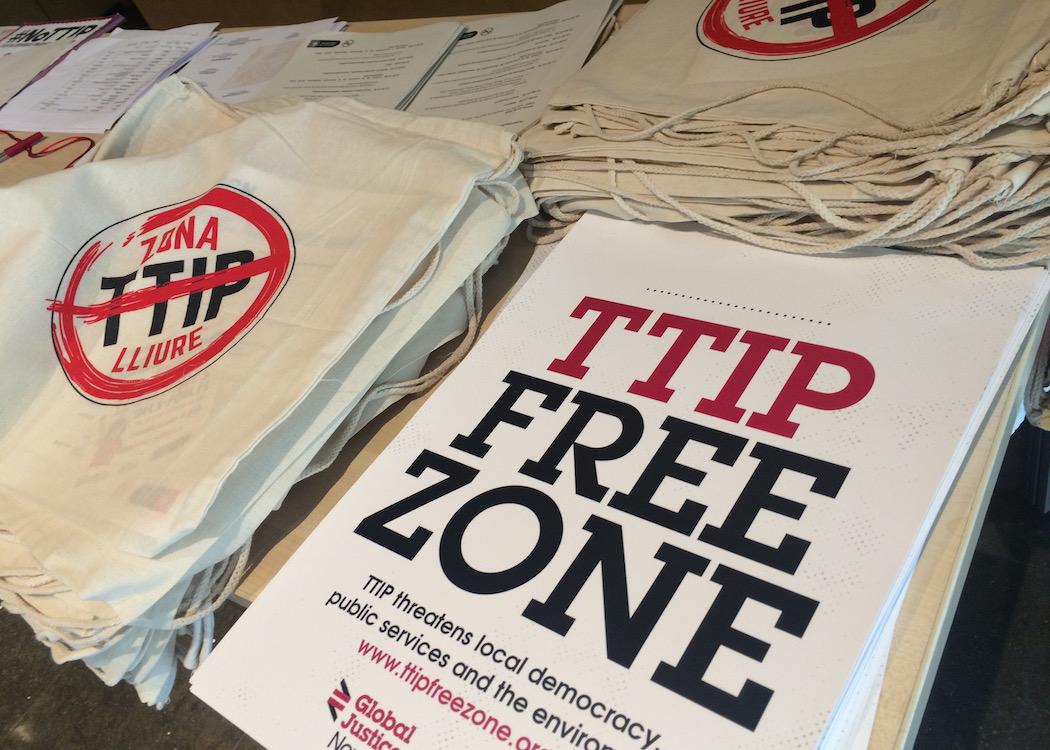 PAN-EUROPEAN opposition to the Transatlantic Trade and Investment Partnership [TTIP] and other trade deals was reaffirmed in Barcelona as mayors and local councils signed a statement demanding suspension of the treaty negotiations.

The gathering of representatives from forty ‘TTIP-free’ cities and councils took place in Barcelona on 21-22 April and saw a declaration issued demanding the immediate suspension of the deals.

In this ‘Barcelona Declaration’, the mayors and local councillors said: “We consider it our duty as elected representatives to defend local communities and democratic institutions as spaces for debate and decision-making, and to strengthen public policies for the good of our citizens, protecting the environment and supporting SMEs and the local economy.”

“We are deeply concerned that these treaties will put at risk our capacity to legislate and use public funds (including public procurement), severely damaging our task to aid people in basic issues such as: housing, health, environment, social services, educaiton, local economic development or food safety.”

The declaration calls for the negotiation of a new mandate for TTIP and the Trade in Services Agreement [TISA] from EU member states, which would “tak[e] into account the demands of those who have not been consulted”, and calls on the European Parliament and national governments not to ratify the Canada-EU treaty CETA.

Concern over TTIP, TISA and CETA has been growing in recent years after details of the treaties emerged which campaigners say could usher in the privatisation of public services, threaten health protections and workers rights, and increase corporate power.

A European-wide petition against TTIP was signed by three million people.

The gathering in Barcelona was attended by Scottish and English activists from Global Justice Now, a group that campaigns on fair distribution of resources and a rebalancing of the world economy. The organisation’s trade campaigner Guy Taylor said: “The declaration from Barcelona is an important step forward in the fight against TTIP and CETA. It is a strong statement of intent, and calls unconditionally for the cessation of negotiations on TTIP and to refuse to accept CETA.

“Local authorities are crucial in this campaign, they are an important part of the political parties’ structures and can help sway votes in Westminster and Brussels. Barcelona represents the start of a new international alliance that can only increase our chances of beating TTIP.

“The negotiations go against the whole principle of subsidiarity” Emilia Saiz

Speaking at the declaration in Barcelona, Jordi Via, commissioner of Social and Solidarity Economy Cooperative and Consumer Affairs in Barcelona City Council, said TTIP and other deals were incompatible with the kind of “plural economy” needed to achieve personal, societal and environmental sustainability.

Barcelona has a flourishing network of ‘solidarity economy’ networks, in which co-operative models are springing up to challenge the privatised and commercialised city economy.

Energy and food co-operatives are increasingly common. Such networks, Via said, aim to challenge the “deregularisation and oligopolistic control of basic sectors of the economy”, but TTIP and other agreements would, he said, threaten such networks.

Birmingham councillor Martin Straker-Welds, speaking on behalf of council leader John Clancy, read out the declaration on 22 April to a gathering of trade unionists, councillors and campaigners from across Europe.

Scottish Labour voted to oppose TTIP in full at its conference in October 2015, and the Scottish Green Party and Rise are also opposed. The SNP is not opposed on principal, but has concerns about the threat to public services, particularly the NHS.

TTIP-free zones have spread as a tactic across Europe, and the treaty negotiations in Brussels will in fact take place in a municipality which is opposed to TTIP.

“The negotiations are a true scandal”, said Emilia Saiz, deputy general of United Cities and Local Government in Barcelona.

“They go against the whole principle of subsidiarity,” she added.

“I would have made a stronger statement in the declaration: I would include reference to local self-government, subsidiarity, solidarity.”

“Barcelona represents the start of a new international alliance that can only increase our chances of beating TTIP.” Guy Taylor

SNP MEP Alyn Smith, who has spoken against parts of the TTIP treaty and the secrecy around negotiations, told CommonSpace: “I have been contacted by Council colleagues all over Scotland proposing positions of local authorities and have assisted in drafting them, and fully support this engagement.

“I welcome any scrutiny of the TTIP negotiations, as it strengthens our position. The SNP has set out clear red lines on the text as it is being negotiated, and we have won some improvements in transparency and will continue to press this case.

“TTIP remains work in progress and will not be approved unless a majority of MEPs support it, so to maximise our influence we remain engaged. But there should be no doubt, as it stands I cannot support TTIP and will continue, from within the process, to argue against the parts which potentially threaten the provision of public services in Scotland.”

A survey published on 21 April showed public support for the TTIP deal had plummeted. In Germany support had fallen from 55 per cent to 17 per cent in just two years, with similar figures from the United States.

Demonstrations are planned against TTIP in Hanover in the coming days as German chancellor Angela Merkel and US president Barack Obama are due to meet in the city.