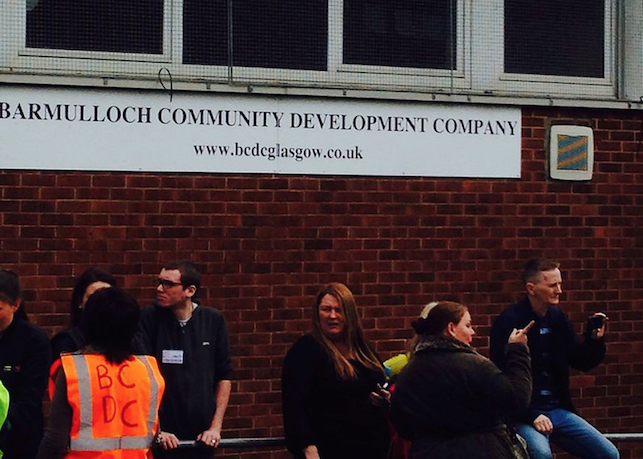 Ex-church will be owned by the community in Barmulloch, North Glasgow

THE COMMUNITY OF BARMULLOCH in North Glasgow has become the first group to benefit from the expansion of land reform rights to Scotland’s towns and cities.

The Barmulloch Community Development Company (BCDC) has won a £85,000 funding bid from the Scottish Land Fund to purchase the former All Saints Church and associated church house on Broomfield Road.

This is the first urban funding bid awarded since the community right to buy and funding support was expanded to the whole of Scotland last month.

The funding means that the community centre, which currently hosts a boxing gym, money advice centre and training/meeting rooms, will be owned by the community, and previous lease arrangements will no longer be necessary.

Funding will also employ a development office for the group and site, allowing progress to be made on plans to build industrial units for employment and revenue opportunities.

Scotland currently suffers from over 11,000 hectares of derelict land, which is concentrated in the poorest communities.

Jim Hope, development officer of BCDC, said: “We are delighted and proud to be the first urban group to receive an award from the Scottish Land Fund. The award, to acquire a former church scheduled for demolition, will have a major impact on an area of multiple deprivation. It will create much needed space for community activities, will preserve a much loved local landmark and will help to create a greater pride in the community.

“It also represents a huge boost to BCDC’s efforts to increase its services to local people and to ensure the sustainability of its operations.”

The community right to buy has seen over 500,000 acres of Scotland transferred to the communities that live on the land. However, the process – set up through the 2003 Land Reform Act – was originally limited to the Highlands and Islands.

Recently, the Community Empowerment Act expanded land reform rights. It is hoped that more urban communities will gain the resources and experience to take control of local assets.

Scotland currently suffers from over 11,000 hectares of derelict land, which is concentrated in the poorest communities.

John Watt, Scottish Land Fund committee chair, added: “I am delighted to welcome Barmulloch Community Development Company as the first urban project to benefit from the Scottish Land Fund. Community ownership is a viable option for many local communities across Scotland giving them more control over the management and development of locally important land and buildings. BCDC will now transform its ambition into reality along the way contributing to the future sustainability and development of the local area.”

A second Scottish Land Fund award was also announced today [Tuesday 24 May] to Moffat Community Woodlands, which received £171,622 to purchase 33.4 hectares of woodland on Gallow Hill, Dumfries and Galloway.