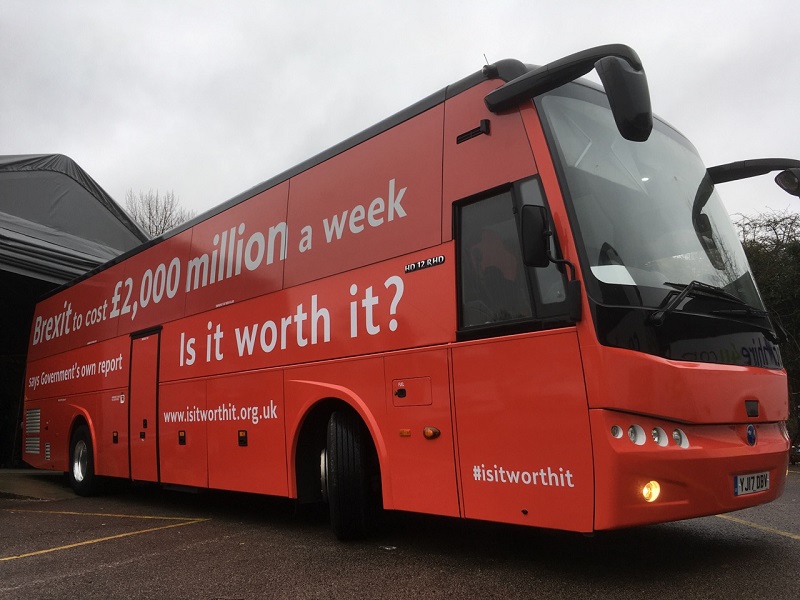 AN alternative bus warning of the cost of Brexit to the UK economy is to visit Glasgow and Edinburgh this weekend, in a cheeky nod to Brexiteer Boris Johnson’s campaign bus which suggested an NHS boost of £350m per week if the UK voted to leave the EU.

The bus is a creation of the ‘Is it worth it?’ campaign and was funded by around 670 individuals across the country at a cost of £24 each, and events have been organised by 20 grassroots groups, according to campaigners. The bus slogan warns that a leaked government report looking at the estimated costs of Brexit show that a worst-case hard Brexit scenario could cost the economy £2,000m – commonly known as £2b – per week.

The government said the report was at a “preliminary” stage when it was leaked in January and refused to publish its analysis in full, but Brexit critics argue that a departure from the single market will inevitably cost the UK large sums of money.

“Our country stands to lose significantly more than other parts of the UK and Brexit will cause misery to so many Scots – both those whose families have been here for generations and those who have recently decide to make Scotland their home and have already contributed so much to our economy and culture.”

In Scotland, a Scottish Government study last month warned that a hard ‘no deal’ Brexit could leave Scotland’s economy £12.7bn a year worse off by 2030.

The campaign bus will visit Glasgow and Edinburgh on Saturday (24 February) as part of an eight-day tour visiting 33 locations in the UK.

Picture courtesy of Is it worth it?