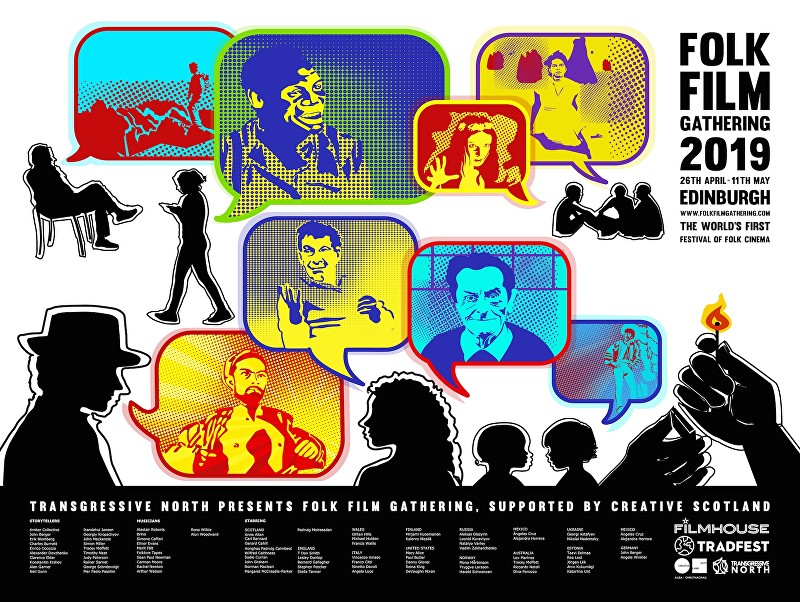 Film critic Scott Wilson speaks to curator Jamie Chambers about the 2019 Folk Film Gathering, which begins today [26 April] and will revolve around the theme of storytelling

“I’M AWARE that our festival is becoming increasingly political.”

Now in its fifth year, the Folk Film Gathering continues to establish itself as one of the more insightful events in Scotland’s film calendar. Not interested in securing the latest premiere, instead its director Jamie Chambers curates a programme around a theme, the idea being films placed alongside one another enter into a dialogue to create something new.

For 2019, this theme is storytelling. “Storytelling can be a political thing,” says Chambers. “It bonds people to an extent. One of the things people remark upon about our screenings is this sense of watching a film together, of having a shared experience. That’s one of the things that’s important to us for this festival, creating this opportunity not just through cinema, but sharing folk songs and storytellers.”

As has become customary, this live element will play an integral part in this year’s festival. Following on from 2018’s event, the film ceilidh returns, this time to celebrate the work of Enrico Cocozza. “I think he’s the sort of guy we should be talking about a lot more than we are, so we’ve based a film ceilidh around that, where we’re showing his short films amidst music, storytelling and audience discussion. That’s one of the events where we’re looking at what the place of cinema within folk culture might be. How can we have a ceilidh event and have film at the heart of it? That conviviality, the shared experience.”

Live performances will introduce many of the screenings too, some by musicians, some by storytellers. While it’s intended to warm up the experience – “what you usually see before a film is 25 minutes of car adverts” – there is an unexpected element to being addressed while part of a cinema audience. Chambers says, “we’d have storytellers come on and say, ‘how you all doing?’ and some people would freak out a bit – ‘I don’t know, don’t ask me’. It’s questioning some of the habits we get into watching films. Can we have more of a shared experience?”

He says it’s one of the things audiences single out each year. “Someone once said ‘we all breathed together’.”

“We want to subvert and challenge certain ways of looking at working class communities, indigenous communities, minority communities, and in doing so to try and subvert some of the harm that those perspectives continue to wreak.”

The festival has commissioned a new score for Zvenigora, a silent Ukrainian film by Alexander Dovzhenko from the 1920s. The first in a trilogy, Chambers says it’s been a long-held ambition which is coming to fruition, with the intention of scoring the rest in the series in the future. The music, by Folklore Tapes, will “explore the resonances between Scotland and Ukraine, two countries with ritual storytelling and folklore tradition” for one-day only.

Speaking to CommonSpace for the third year in a row, embracing the festival’s politicisation comes as a change. In the early years, Chambers thinks “we were maybe a little more cautious,” while aware they were showing films by explicitly political filmmakers and socialists like Ken Loach and the Amber Collective. “I have friends who work in similar fields to me and work with ideas of heritage and audiences, and see their work as being entirely apolitical, whereas I feel whenever there’s an emphasis on community, people’s culture, the politics is always there whether you want to see it or not.”

This year, he is open about an interest in the tensions of the word folk and the notion of folk cinema. “We’re looking to explore and push those tensions, but given the political situation in the western world, we can’t help but think about how our programme responds. It can’t help but be a response to how you feel about certain thing­­s.”

He acknowledges a question of emphasis, whether those elements are brought to the fore or not. But, talk of people’s culture – “which is often working class culture or indigenous culture” – carries with it an inherent ideology.

“It’s there in Common Weal’s motto – all of us first. That sense of some of the ties and connections between us is under threat, given developments such as Brexit.”

“We’re all the people, we’re all part of the everyone,” says Chambers. “It’s there in Common Weal’s motto – all of us first. That sense of some of the ties and connections between us is under threat, given developments such as Brexit.”

Despite planning the festival a year in advance, the programming has an undeniable timeliness. Opening film Walk Me Home is “a film that sees Scotland very much as a part of Europe and celebrates the interconnectivity of different nations and different people.” It’s a film that hasn’t been shown in Edinburgh since 1993 and the Folk Film Gathering were involved in having it digitised.

With the world’s tensions, they manifest here through a number of folk horror films. Viy, The White Lady, To Sleep With Anger, and Red Shift are all considered folk horror in one sense or another. There is a danger in promoting division, so Chambers is careful to differentiate two kinds of horror, one which shows the fears of a community from within, like Get Out (which he considers to be the best kind of folk horror), and one which focuses on the fear caused by another community, such as in The Wicker Man. The latter, he says, they will not show.

While harmful in the way they perpetuate certain perspectives, he also finds outsider perspectives to carry with it inaccuracies and a certain inauthenticity – a loaded word in its own right, for who gets to decide what is authentic?

But there is the Folk Film Gathering’s purpose. “We want to subvert and challenge certain ways of looking at working class communities, indigenous communities, minority communities, and in doing so to try and subvert some of the harm that those perspectives continue to wreak. Walk Me Home is a film about connectivity between fellow travellers – something I suspect that we could all do with more of at the moment.”