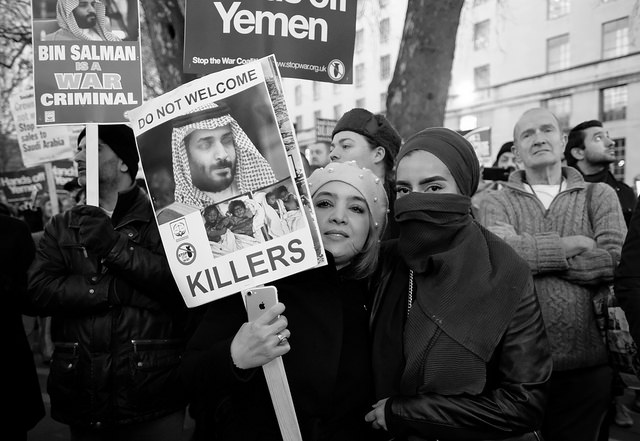 FOLLOWING A Belgian judicial body’s decision to suspend the sale of arms to Saudi Arabia, UK-based campaigners say it’s time for Theresa May’s government to follow suit with a human rights based approach.

Ruling on a case brought forward by pacifist and human rights campaigners in Belgium, the Human Rights League and CNAPD, the Belgian Council of State ordered that four export licenses issued by the Walloon regional government be cancelled.

The licences would have allowed for the sale of weapons by FN Herstal to Saudi Arabia, but the Council ruled that sufficient evidence had not been acquired by the government that the arms would be used in compliance with Belgian law. Belgian arms exports rules state that the arms must not be intended for uses other than self-defence.

The UK Government has faced sustained criticism from human rights campaigners for its continued provision of arms to Saudi Arabia in light of its war against Yemen, around which major concerns of human rights abuses have been raised.

Since 2015, when the war started, the UK Government has licensed over £4.6bn of arms to Saudi Arabia, increasing rather than decreasing the number of arms sales to the regime since the war began.

Pete Cannell of Edinburgh Stop the War Coalition said the ruling in Belgium should be seen as a win for campaigners around the world who have sought to end the sale of arms to the regime. “It’s excellent news that Belgium has suspended arms sales to Saudi Arabia,” Cannell said.

“The Nato summit assembles in Brussels this weekend and there will be massive pressure from Trump to increase military spending by Nato partners and to support the aggressive posture that he has adopted towards Iran – with the support of the Saudis and Israel.

“I don’t believe that Belgium would have taken this step without the growing campaign to end arms sales to Saudi Arabia.”

Belgium follows Norway in banning arms sales to Saudi Arabia, while the European Parliament voted in 2016 for an EU arms embargo against the regime.

The campaigners who brought the complaint forward in Belgium objected to a total of 20 export licences issues by the Walloon regional government, but most of these sales had already taken place. Saudi Arabia is a major source of income for arms companies in Walloon, with €153m of sales in 2017 alone.

Cannell said the decision in Belgium would “put further pressure on the British government” but said that much work was still to be done to change the UK’s position. “Britain is deeply involved in supporting Saudi Arabia and the UAE in its attacks on Yemen,” he said.

“British military are active in coordinating attacks. The humanitarian crisis in Yemen is already extreme with probably the largest outbreak of cholera that the world has ever seen and millions are starving.

“This will get worse if the latest attacks succeed in cutting the link to basic food supplies.  Yemen is hugely underreported and we will have to continue to campaign to force the British government to stop arms and end its support.”

Last month, an open letter to UK international trade secretary Liam Fox calling on the government to suspend arms sales to Saudi Arabia in the wake of a “rapidly worsening humanitarian crisis” in Yemen was signed by Amnesty International, Control Arms, Safer World and the UN Association UK.

The UK Government recently committed £170m in aid to Yemen, while international development secretary Penny Mordaunt said during an international visit in December last year that Saudi Arabia’s actions in Yemen could be “in breach of international humanitarian law”.

While stating her support for the Saudi led coalition’s right to screen ships for weapons, she said: “It is very clear that if you are using starvation as a weapon you are in breach of international humanitarian law.

“And what I have seen on my visit is that what is being held up is aid.

“I very much understand the importance of our relationship with Saudi Arabia. But we do not help that relationship by not speaking about the facts of the matter.”

Despite this, the government continues the sale of arms being used in the conflict, while campaigners insist the UK “has a moral and legal obligation to prevent the supply of any weaponry which risks being used in Yemen”.