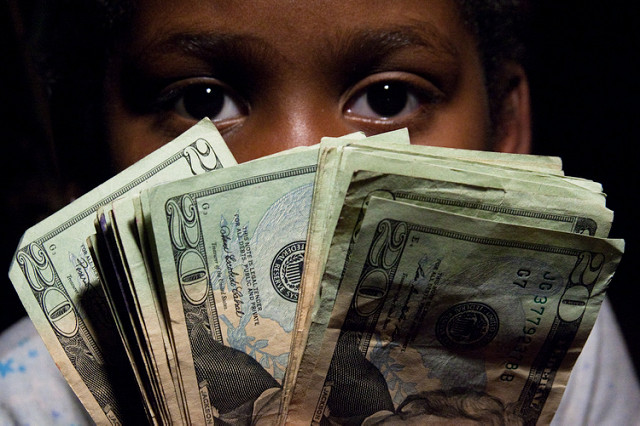 ONE of the most common objections to a basic income is that it would increase inflation. Many people remember from history lessons at school the photos of children playing with huge piles of bank notes in East Germany, but it is essential that we confront the idea that introducing an equitable and fair welfare state would lead to economic disaster if we are to win people over.

There was a recent debate on the matter between economists of differing views, as reported on the Basic Income Earth Network. In it, Karl Widerquist (who will be speaking at our forthcoming event in Fife on 28 January looking at a Fife pilot scheme) makes the point that spending on basic income would not make any greater impact on inflation than any other government spending.

What frustrates me is that those who expound the inflation argument around the dangers of enriching communities always seem to do so reactively, and never proactively.

What frustrates me is that those who expound the inflation argument around the dangers of enriching communities always seem to do so reactively, and never proactively.

In my eyes all this does is show that inflation is an argument thrown up by those with just enough knowledge to be dangerous, who oppose helping the poorest in society on an ideological basis.

This is not a dig at the Conservatives either. Dave Dempsey (Conservative Fife councillor for Inverkeithing, Dalgety Bay, and Aberdour), for example, is in favour of bringing in a basic income on the basis that it increases personal liberty, and will be speaking at the Fife pilot event.

I stand by that position, however I would like to make some arguments here against inflation fears based upon my personal view that basic income should be a mechanism to redistribute money rather than simply print more.

In my eyes all this does is show that inflation is an argument thrown up by those with just enough knowledge to be dangerous, who oppose helping the poorest in society on an ideological basis.

First of all, to say that a basic income providing people with a higher income would mean higher prices, and that this must be prevented, logically implies that the speaker believes either that the current welfare levels are perfect or that they are too high.

If you care so much about inflation then I urge you to make your views heard and lobby your MPs to reduce social support to the poorest in society, since you believe there is a net benefit to the nation. That is a brave line to take at a dinner party.

Secondly, in our most deprived communities high unemployment creates a feedback loop whereby job creation is thwarted by a lack of money in the community to buy goods and services from local businesses to drive growth and the need for more workers.

If you think restricting the money into these communities in the name of preventing inflation is the right thing to do then, again, make your voice heard. It is easy to object to ideas when you won’t advocate alternatives.

Thirdly, redistributing wealth from the richest to the poorest would not mean shifting money from one savings account to another, since most people can barely afford to save anything at all.

For example, 24 per cent of households in Scotland report having no savings at all, with an additional 16 per cent having less than £1,000. This means that money into the general population would flow into the businesses providing goods and services people currently need and cannot afford, whereas tax breaks to the rich simply sit in bank accounts accruing interest as their cost of living is already amply covered by their income.

Recent scandals like the Panama Papers simply reinforce that when the rich get richer money flows out of the nation to go and work for someone else. Simply look at this graph of income percentiles to understand that moving that line closer to a straight line would benefit the vast majority of the population. 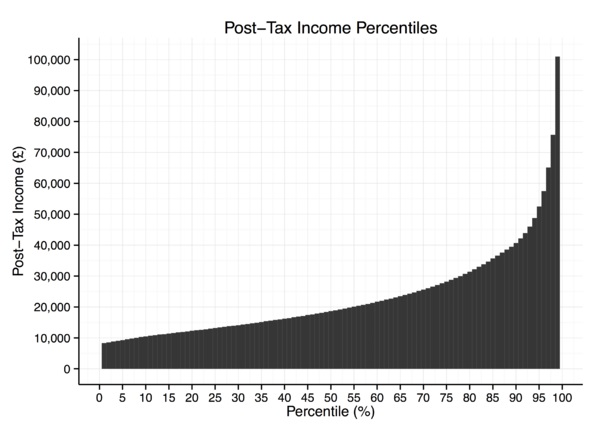 In my view, myths and fearmongering about inflation are the major impediment to mass support for a measure that would benefit almost all of us, and the poor most of all.

Fourthly, I would turn to a basic economic principle to argue against inflationary fears. The same market forces that should create higher prices are surely also subject to that credo of supply and demand.

Finally, as Karl Widerquist pointed out, and we argue here, on health, crime, and bureaucracy there would be cost savings elsewhere in public spending based upon reducing the need to means test the population, and reducing the enormous costs to public services that are driven primarily by poverty.

Even though basic income would increase spending in one part of the government budget, it would allow lower spend in others.

On 28 January there is a free event in Kelty about a proposed basic income pilot in Fife. Pilot schemes like this will be essential for an evidence-based approach to introducing a wider basic income, and I believe will demonstrate that concerns about inflation are unfounded.