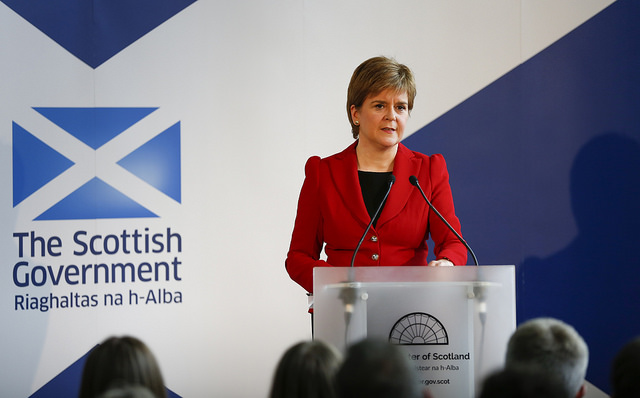 IT’S been an interesting week. The Labour party conference revealed a more secure and confident leadership, with no fear of pushing further into clear red water.

Leader Jeremy Corbyn went as far as to question capitalism’s legitimacy, amid a flurry of ambitious policies on reining in the sharper edges of our economic system: controls on credit card debt; controls on rent; controls on gentrification. It took a decade after the collapse of Northern Rock, but finally regulation of financialised, rentier capitalism appears to be on the agenda.

Theresa May used her speech at the 20th anniversary of Bank of England independence to reassert the values of “free market” capitalism. That May felt the need to do this is a sign that a genuine debate now exists about our economic future in Britain, perhaps for the first time since Thatcher and the rise of neoliberalism after the economic crisis of the 1970s and the perceived failure of Keynesianism to reverse decline.

In fact, Thatcher’s real economic legacy is widely misunderstood – rather than unleash an avalanche of dynamic and productive new enterprises, the neoliberals mainly succeeded in unleashing an avalanche of private debt through the financial ‘big bang’, which made asset price inflation – not productive business investment – the major economic driver in the British economy.

This graph from economist Steve Keen reveals the unprecedented rise in private indebtedness in the UK since Thatcher came to power in 1979. 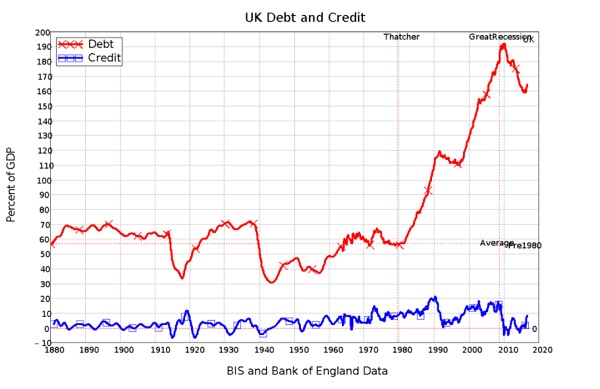 This empowered Britain’s increasingly monopolised banking sector, not plucky entrepreneurs, as what you owned – not what you did – became the most powerful factor in business success. The privatisation of key public assets – most importantly, housing – aided and abetted the financialisation process.

Far from a “free market” of capitalists competing on an equal playing field, Thatcher’s capitalism was the great victory of usury and property ownership.

As with everything, the financialisation frenzy eventually hit its limits – banks thought their unlimited tap of credit was an endless profit-making machine no matter how many unrepayable loans they dished out, hence the now infamous ‘Ninja’ loans –  ‘no income, no jobs no assets’. Of course, this was an illusion, and the house of cards all came crashing down in 2008.

The immediate aftermath was perhaps the left’s greatest defeat. Rather than the bankers taking the fall and financialisation being brought to heel, the Tories – sadly with Labour’s help – managed to turn the crisis on to the public sector.

Government spending, not commercial banking, was identified as the problem. The banks were re-capitalised and the housing market re-inflated, and then after a while the credit tap was turned on again to make up for a shrinking in demand from austerity.

It took a decade after the collapse of Northern Rock, but finally regulation of financialised, rentier capitalism appears to be on the agenda.

This resurrection of financialisation, or what former Greek finance minister Yanis Varoufakis has called “bankruptocracy”, has more deeply embedded all the problems that were emerging pre-crash: productivity and wages stagnating under the weight of debt deflation; good public sector jobs being replaced with precarious private sector jobs; rising wealth inequality with a generation stuck in a under-regulated private rented sector; and a level of private indebtedness returning to the pre-crisis level which is leading to new bubbles in car finance and credit card loans.

Indeed, in a must read piece on Open Democracy, Ed Smythe points out that in Q1 2017 the UK household deficit – the difference between what households are borrowing and their income – was at its highest level in over a century.

This coincides with a decline in wages in the UK which is the longest since the Napoleonic wars. Is any more proof needed of how financialisation is once again reaping what will inevitably be a whirlwind of private indebtedness?

Theresa May is clueless about all of this, still babbling about the need to bring down public debt, which even the IMF and OECD say is at a perfectly sustainable level, with investment not cuts desperately needed in the UK economy.

Her concession that government must be honest about where free-market capitalism is “not currently working” is just confirmation of how hollow her argument is: in what way exactly is it not working? What are you going to do to fix it? Is austerity not re-inforcing its weaknesses? It’s not just May; all the neoliberals are totally bereft of answers to this.

Corbyn’s focus on housing in his speech was recognition that the problem of financialisation must be grappled with.

Corbyn’s focus on housing in his speech was recognition that the problem of financialisation must be grappled with. There’s also evidence this thinking is going on in combination with addressing the other great challenges of the future, two of the most crucial being climate change and automation.

His programme still does not amount to a transition to a post-neoliberal economy, but there is certainly evidence it is moving towards that.

On Scotland, the Labour leader still has a bit of a tin ear. I can understand why some are incredulous when he can excuse an NHS pay cap by the Welsh government due to UK austerity, but on Scotland he says the SNP could stop all austerity and just isn’t using the powers it has. That doesn’t add up – either devolved government is powerful enough to cope with UK Government austerity, or it isn’t.

Nonetheless, that shouldn’t overshadow the bigger debate about the future of the economy – May’s austerity-obsessed Thatcherite capitalism, Corbyn’s emerging socialist agenda, or something else? What’s the Scottish contribution to this increasingly polarised debate about our economic future?

A recent YouGov poll shows SNP members are more critical of capitalism than any of the other big parties, but that’s not reflected by the leadership. I have been critical of First Minister Nicola Sturgeon sticking to a ‘third way’ script on the global economy despite the evidence of its failure. In Sturgeon’s recent programme for government there perhaps contained some implicit critique of financialisation, but nothing forthright.

There’s also evidence this thinking is going on in combination with addressing the other great challenges of the future, two of the most crucial being climate change and automation.

Her announcement that she would pursue a national investment bank to boost investment in Scotland in innovation and “inclusive growth” was a tacit acceptance that Scotland’s financial sector is failing to do this. While positive, in and of itself it does not amount to a new economic strategy for Scotland.

One of the more disappointing elements of the programme for government is that little was announced on housing. While new money for tackling homelessness is of course to be welcomed, the wider structural problems of the housing market were not addressed.

As I pointed out in a recent analysis piece, average house prices reached a new peak in July 2017. Housing has been increasingly privatised in Scotland since devolution, with the private rented sector tripling in size. Average rent prices have risen well above wages, while Scotland is ahead of London and only behind three English regions for median financial household debt.

The problem of a financialised housing system is therefore well and truly present in Scotland, with an unusually large financial sector and low levels of productivity being obvious corollaries to this.

Scottish politics can’t afford to sit on the sidelines of what is emerging as two very distinct ideas of our economic future.

I was pleased to see this clearly acknowledged at the Scottish Land Commission’s first conference yesterday, with Laurie Macfarlane – one of the main economists in Scotland sounding the alarm on this – one of the keynote speakers.

Common Weal will be contributing to this much needed debate going forward, with our housing convention on 7 October in Glasgow a key starting point for this work.

Let’s hope the debate is also reflected at the SNP annual conference one day later, as Scottish politics can’t afford to sit on the sidelines of what is emerging as two very distinct ideas of our economic future.