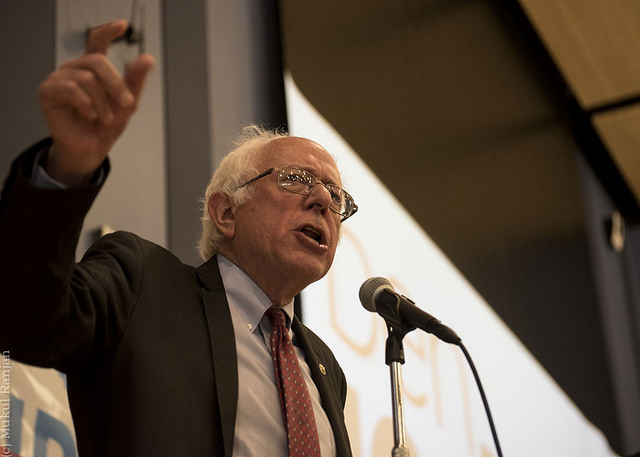 BERNIE SANDERS, the US senator and former opponent of Hillary Clinton for the 2016 Democratic candidacy for president, has congratulated Scotland for its ban on fracking.

Sanders has repeatedly called for a national ban on fracking in the United States.

The self-described “democratic socialist” described the Scottish Government’s stance on the increasingly controversial form of unconventional gas extraction as a “significant step”.

“Congratulations to Scotland for taking the very significant step to ban fracking following enormous public opposition to the practice.” US Senator Bernie Sanders

“Fracking a danger to the air we breathe and to our water supply. It has resulted in more earthquakes, is highly explosive, and is contributing to climate change.

Sanders’ position on fracking was clear-cut during his 2016 Democratic Primary contest with Hillary Clinton, who only offered qualified objections to the practice, while Sanders was completely opposed.

“Just as I believe you can’t take on Wall Street while taking their money, I don’t believe you can take on climate change effectively while taking money from those who would profit off the destruction of the planet,” Sanders said in February of 2016.

The Scottish Government put a moratorium on fracking into effect in January 2015, and confirmed earlier this month that it was opposed to the practice. Scottish energy minister Paul Wheelhouse announced that the Scottish Parliament will vote on the issue in October.

Wheelhouse told press that fracking “cannot and will not take place in Scotland”.

Given that 99 per cent of the 60,000 respondents to a public consultation on fracking opposed the practice, Wheelhouse argued that “there is no social licence for unconventional oil and gas to be taken forward at this time”.

This represented a progression from the SNP’s decision to abstain on an earlier vote in June last year, when the Scottish Parliament passed a motion to ban fracking with the support of Labour, Lib Dem and Green MSPs. Only the Scottish Conservatives voted against the motion, with Tory MSP Dean Lockhart arguing that “yet again Scotland’s economy is left behind”.

While the ban was welcomed by Scottish environmental groups, former SNP deputy leader Jim Sillars last week diverged from much of the party and called for a “rethink” on the issue.

Speaking on the BBC’s Sunday Politics Scotland, Sillars said: “I think the Scottish public didn’t really know that there was a major consultation going on, which allowed the green movement to ramp up to 99% against fracking.

“Joe Stalin used to get figures like that as well.”