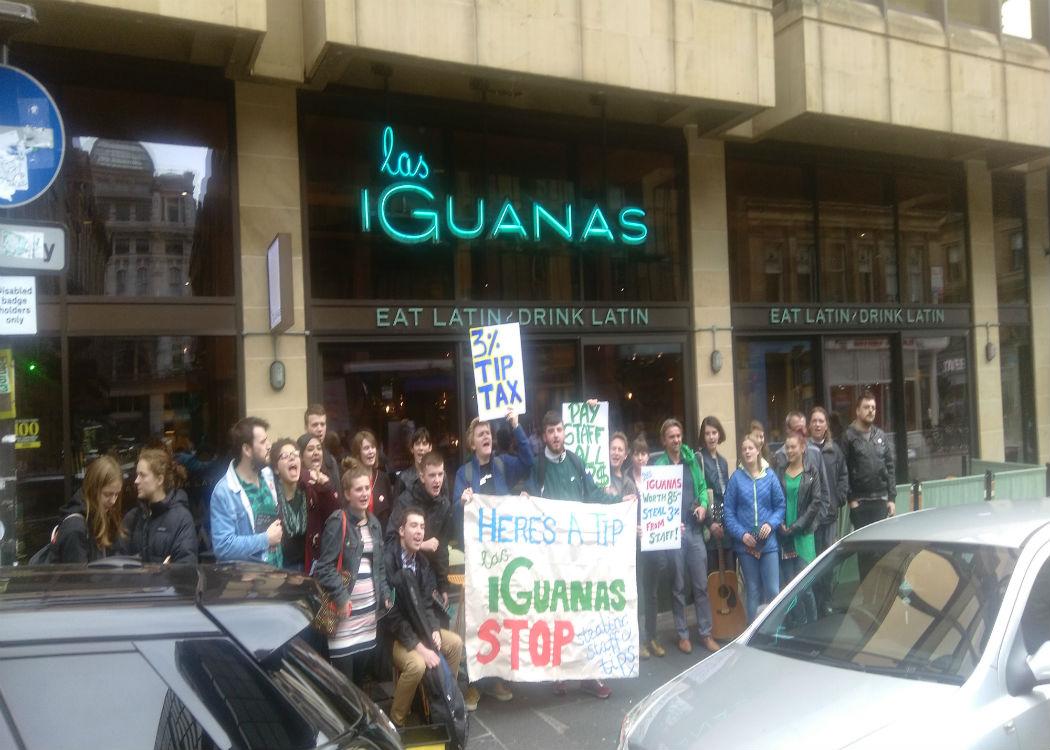 THE STUC’s Better Than Zero campaign against zero hours contracts has ramped up with a second flash mob protest against abuses of workers’ rights in the service industry.

The campaign targeted Las Iguanas at the weekend, a recently opened Mexican restaurant in Glasgow’s West Nile street, for the alleged practice of requiring their staff to pay them back three percent of their total earnings in the night.

Around 20 campaigners sat in the restaurant posing as customers before several rose one after the other to make speeches against the practice, while the rest of the activists walked out of the restaurant to where other protesters had gathered at the entrance.

Activists then distributed leaflets and performed the Aloe Blacc song “I need a dollar”.

The stunt comes after a similar flash mob in Ashton Lane in Glasgow against employment practices and low pay in the service sector.

Jordan Gibson, a 20-year-old service sector worker who made a speech inside the restaurant told CommonSpace: “We are here to protest because Las Iguanas has been taking a cut of their staffs wages at the end of each shift to cover tips they might not be getting in the first place.”

He said that conditions for young people in the service economy, which has overtaken manufacturing industries in Britain in recent years, were poor due to underregulation: “Nothing seems to be concrete; people are getting messed about with things like zero hour contracts, issues with tips, having to pay for things like uniforms and training, just not feeling properly protected,” he said

“Before young people spend their whole lives working they need to know their rights, what’s right and wrong about in a workplace and what makes a good work environment,” he added.

Better than Zero say their campaign is set to continue targeting businesses which engage in unfair employment practices.