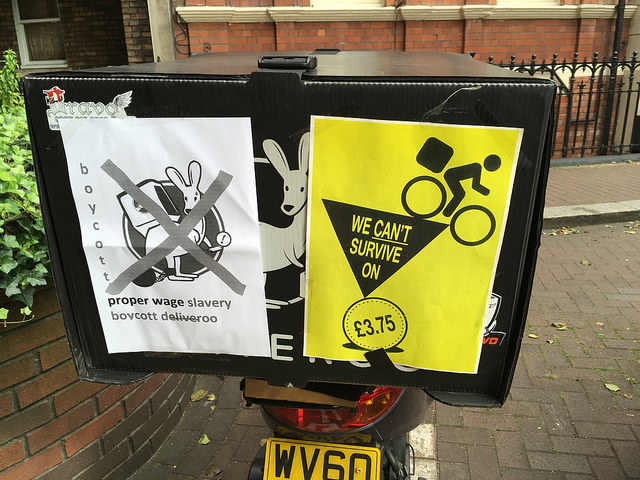 Better Than Zero, an activist group which led successful campaigns against Las Iguanas and Sports Direct for underpaying and overworking staff, is now working with Deliveroo workers in Glasgow and Edinburgh to fight back against what it says are exploitative work practices enacted by the company.

The group, which was praised by Labour leader Jeremy Corbyn for its “vibrant and engaging action” when he spoke at the STUC conference on Monday, is determined to build on victories against zero hours contracts to securing better employment conditions for Deliveroo workers.

The food delivery company is accused of abusing the self-employed status of its workers to avoid paying them a minimum wage, misleading people about how much flexibility the workers actually have, and charging workers £150 to purchase the necessary safety equipment from the company itself.

Better Than Zero spokesperson Bryan Simpson said: “For us, Deliveroo is the most extreme example of precarious employment and poverty pay within the gig economy.”

Deliveroo is a big presence in the new gig economy. Similar to the transportation company Uber, Deliveroo doesn’t hire workers on fixed contracts. Instead, it treats workers as self-employed contractors, claiming they get to choose to work whenever they want to.

“For us, Deliveroo is the most extreme example of precarious employment and poverty pay within the gig economy.” Bryan Simpson, Better Than Zero

When approached by CommonSpace about the allegations, a Deliveroo spokesperson said: “We are proud to offer flexible work to hundreds of people in Scotland. Above all, riders value the flexibility they have working with Deliveroo and the ability to maximise their earnings, making on average well over the minimum wage.”

The campaigners, however, dispute the company’s claims. A Better Than Zero survey found that nearly half of the 130 Deliveroo riders in Edinburgh reported that the company disciplines riders who try to use the flexibility of their position by taking away their delivery opportunities. “They have to accept a certain amount of orders or they can be put at the bottom of the queue in terms of shifts – they are effectively disciplined,” said Simpson.

Further attacks were levelled at Deliveroo’s wage structure, with campaigners claiming the workers don’t actually make enough to meet minimum wage requirements, let alone Living Wage ones. Deliveroo pays its workers £1 per delivery in addition to a £6 hourly rate – except in Glasgow, where the riders earn £3.75 per delivery and receive no hourly rate, and Better Than Zero claims the limited number of deliveries available to workers limits this to an income below the minimum wage.

In evidence given to the Scottish Affairs Committee in a meeting on sustainable employment in Scotland in March, Deliveroo managing director Dan Warne said that “[a minimum wage] is incompatible with our fee-per-delivery model”, but insisted that the riders were not making below minimum wage, saying that “the average earnings are nine pounds across the UK” according to Deliveroo internal data.

The wage issue is further affected by the cost of equipment. While Deliveroo claims to offer helmets to its workers for free, Better Than Zero claimed that every rider responding to its survey reported having to purchase safety equipment from Deliveroo, including helmets, lights, high visibility jackets and food transportation boxes bearing the company’s logo for £150 – a fee the campaigners say is taken out of the workers’ wages.

The result of all this, the campaigners argue, is that Deliveroo workers are left making an average of £4.50 an hour, and therefore do not benefit from the flexibility that Deliveroo claims comes from working as a self-employed contractor.

Better Than Zero is expected to reveal details of a campaign to highlight the issue in due course.