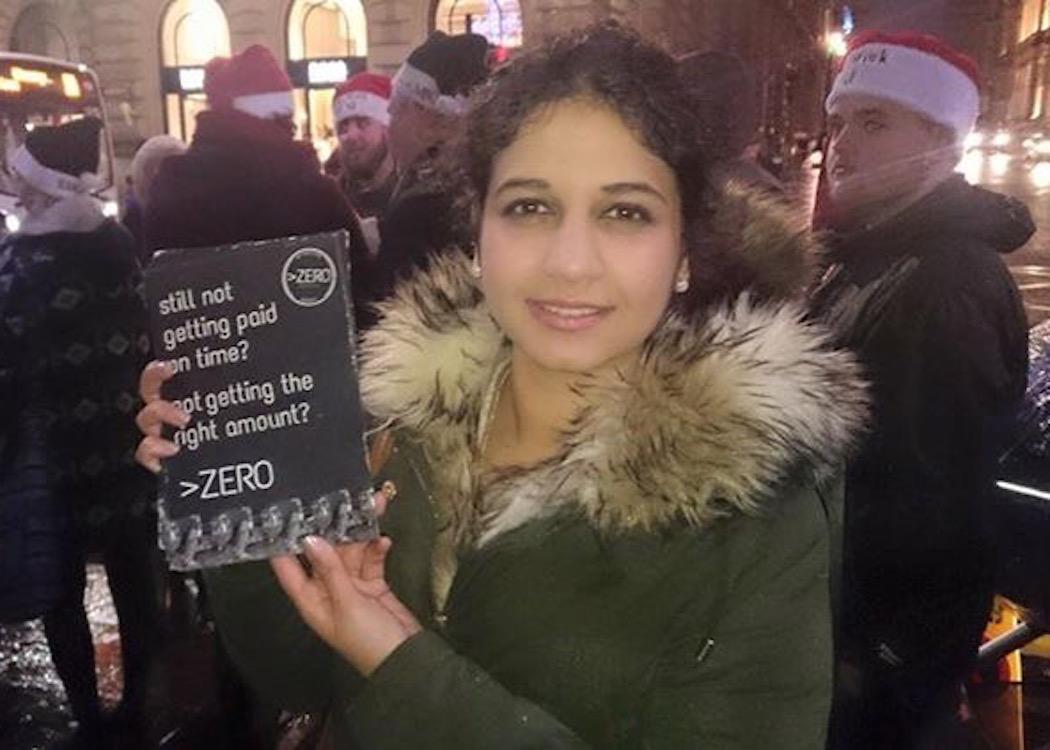 DINERS at Glasgow’s Corinthian restaurant and casino were treated to a spontaneous choir as activists and former employees staged a flashmob on Saturday (5 December), protesting the company’s use of “exploitative” employment practices.

In the third such stunt in recent months, the group staged a spontaneous ‘flashmob’ choir in the restaurant to raise awareness of what they say are “seriously unjust” working conditions and “poverty pay” experienced by G1 employees.

They were supported by a crowd of around 60 campaigners outside. The group donned santa hats and handed out leaflets to passers-by.

Organised by the STUC, the Better than Zero campaign has been targeting companies such as G1 which employ staff on zero hours contracts.

Glasgwegian Ruby Hirsch, 22, attended the protest. She has worked in bars and restaurants for three years. Hirsch said: “G1 have an opportunity to lead the way within the hospitality industry and implement the living wage for staff, this would have a transformational effect on their staff. They say their hard-working staff are their greatest asset – it’s time Stefan King put his money where his mouth is and paid his staff a wage they can live on.”

A former Corinthian employee, who did not wish to be named, said of the venue:

“You work long difficult hours, on minimum wage pay for companies that make millions. I hope that by taking part in today’s protest l can highlight to hospitality workers across Glasgow that your worth is more than that.”

Another former employee said the cost of their uniform was deducted from their wages.

Earlier this year the G1 Group – run by millionaire Stefan King – was identified by HMRC as the top offender for paying staff below the minimum wage.

In August the Better than Zero campaigners took over the fashionable Ashton Lane in the city’s West End, staging a flashmob choir and hanging banners from the balcony of G1-owned bar The Loft.

A similar stunt held in chain restaurant Las Iguanas led to a victory in September, as the company quickly scrapped their practice of deducting three percent of staff pay as ‘tips’.

Representatives from the group are set to speak in a panel discussion as part of the ‘ No to the Trade Union Bill ‘ event on Thursday 10 December in Glasgow, alongside First Minister Nicola Sturgeon and Labour leader Jeremy Corbyn.

Picture courtesy of Better than Zero