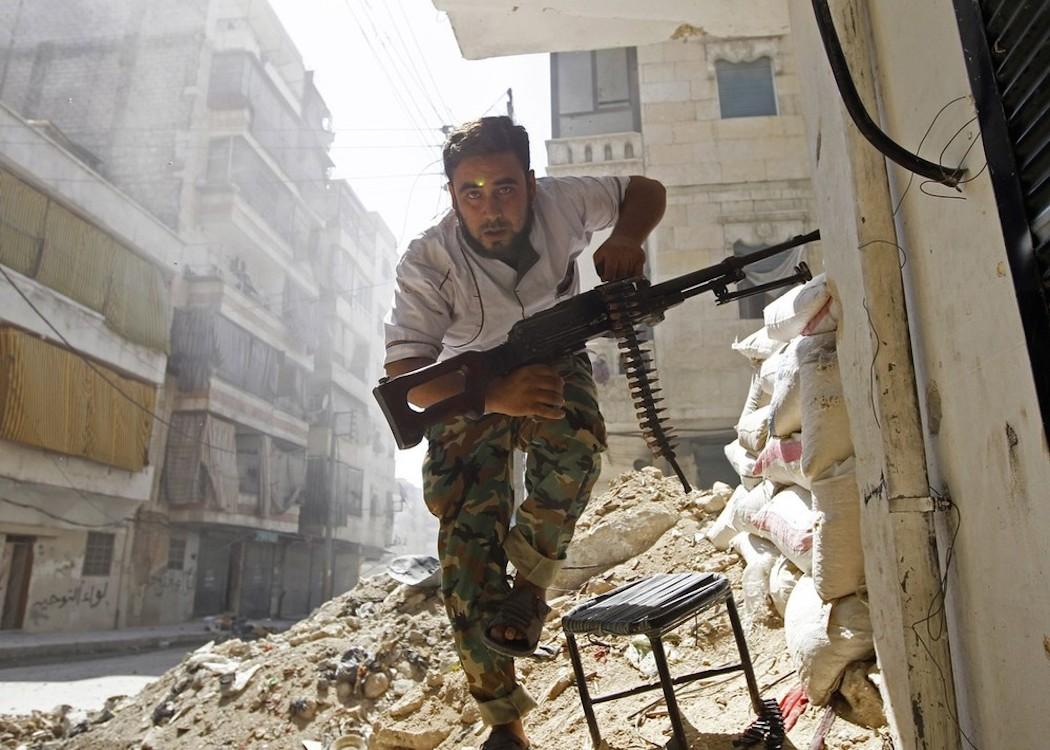 SINCE 2011 the Syrian civil war has added fuel to the fire of destabilisation and violence in the Middle East. Four years later, Arab and Western states – all with their own interests – have intervened in military action across Syria.

The recent terrorist attacks in Paris by Daesh (Islamic State)-inspired extremists have led to new Tory plans for UK planes to join the bombing of Syria. Peace campaigners and MPs of all parties have raised concerns that military action would not succeed without a diplomatic solution to the chaos in Syria.

Assad’s regime, the rebels and Daesh at war in Syria

During the Syrian civil war, which followed a revolution in the country in 2011, the forces of the Bashar al-Assad government, the ‘Free Syria army’ and Daesh have become engaged in a prolonged war.

The civil war has degenerated into a multi-cornered fight with no faction maintaining uncontested control over large areas of land in an increasingly fractured region.

Daesh emerged from this vacuum as one of many Sunni Islamist factions whose ostensible goal was defeating the Assad regime, against which the initial revolution was launched. Many of the armed rebel groups took on a Sunni Islamist ideological colouration in the course of fighting.

The civil war brought destruction to Syria, including the city of Homs ( below )

However, Daesh has since carved out the territory it controls by fighting every faction with which it shares borders – including the original rebel groups that were armed and supported by the United States.

Daesh antagonists include Christians, Kurds, Muslim minorities including Shi’ites and also rival Sunni Islamist anti-Assad groups. It also fights with Al-Nusra Front, the official al-Qaeda group in Syria from which Daesh split, and which shares its ideology.

Despite the extent of territory controlled by Daesh, the civilian casualties it has caused pale into insignificance compared to the Assad regime’s body count. According to the Syrian Network for Human Rights (SNHR), between January and July 2015 Daesh killed 1,131 civilians, with government forces claiming 7,984 civilian lives . SNHR estimates that government bombing infrastructure targets in non-Daesh rebel controlled areas outweigh attacks in Daesh areas by 84 per cent to 16 per cent.

Though Russia claims it is bombing Daesh, critics say these claims are a cover for Russia bombing non-Daesh rebels who pose a threat to Russia’s ally the Assad regime. The Levantine intelligence group have recorded Russian bombing raids taking place mainly in non-Daesh rebel held areas.

Daesh (Islamic State) fighters, below, have seized land in the military vacuums of Iraq and Syria

What is Daesh (Islamic State) and where did it come from?

Daesh, or ‘Islamic State,’ is a terrorist organisation that has taken over parts of Syria and Iraq and carries out attacks around the Middle East and Europe.

The organisation is adept at communicating via social media. Its footage of beheadings has gained huge attention.

Daesh has roots in al-Qaeda, which emerged during the Soviet occupation of Afghanistan in the 1980s when Osama Bin Laden’s mujahideen were supported by the west.

The US occupation of Iraq from 2003-2011 had a similar effect. Years of sanctions caused half a million deaths , followed by a military occupation in which torture and abuse of Iraqis was commonplace. Of 25 Daesh leaders, 17 spent time in US run Iraqi prisons .

Interviews with Daesh fighters in Iraqi prisons found they were not drawn “to the ISIS way of life, but the promise of a way out of their insecure and undignified lives”.

The oppression of the Sunni majority in Iraq under al-Maliki caused resentment and unrest. This factor is crucial in explaining the rise of Daesh.

It meant that when 800 Daesh fighters arrived the city of Mosul in 2014, the majority of the 30,000 Iraqi army troops would not fight them.

In neighbouring Syria, an anti-government uprising led to a civil war which has produced 12 million refugees and 250,000 total civilian deaths. Daesh was able to invade the Syrian city of Raqqa in 2013.

Hillary Clinton’s former assistant Philip Gordon wrote : “The cause [of Daesh] is that tens of millions of Sunni Muslims living between Damascus and Baghdad — and millions more in Europe and elsewhere — are resentful, insecure and humiliated by the politics of the region.”

Saudi and Gulf state interests in competition with Iran

The Syrian conflict has led to interventions by Western, Sunni and Shia nations.

One of the most significant themes of the conflict is the interests of the Gulf state coalition – led by Saudi Arabia – and the positioning of its regional rival Iran.

The Gulf states, which includes Qatar, Bahrain and the United Arab Emirates, have supported the bombing campaign against the Syrian Government in an attempt to undermine the Assad regime – as have Jordan.

In contrast, the Iranians provide support for the Assad government against rebel forces – as the regime is an Iranian ally. This has included $15bn, according to the Syrian finance minister, military support and Iran-backed Hezbollah fighters who have fought alongside the national army.

Saudi Arabia and Iran are rivals for power and resources in the Middle East, with each government threatened by the others’ military, political and theocratic apparatus.

The ongoing strife and lack of ceasefire deal between the nations surrounding Syria compounds the military chaos, making it difficult for any peace deal or post-war reconstruction plan to be agreed.

Kurdish fighters, below , have fought off Daesh extemism – but are undermined by Turkish attacks

Since Daesh expanded into Syria, Kurdish forces have been some of its most successful opponents.

Kurdistan is a geographic location rather than a nation; Kurds live in areas of Iraq, Syria and Turkey with varying degrees of autonomy. They claim to be the largest ethnic group in the world without a recognised nation state.

Since the start of the Syrian Civil War in 2011, government forces have left Kurdish areas such as Rojava, and Kurdish forces have taken control.

Since 2013 though Daesh has encroached upon Kurdish territory in northern Syria, Kurdish forces have repelled them with some success. On occasion the US is an ally and sends these forces military backup.

The Turkish government, on the other hand, has been at war with Kurdish nationalists since 1984 and has a record of oppression against the Kurdish people.

In recent weeks, despite the ongoing presence of Daesh fighters in the area, Turkish forces have bombed fighters of left-wing nationalist group Kurdistan Workers Party, which it sees as a terrorist organisation by the Turks.

In September 2014 Daesh militants attacked the city and region of Kobani in the Kurdish autonomous region of Rojava. Four months later the city had been recaptured by Kurdish militia; notably by the 25,000-strong People’s Protection Units which include many female battalions and are known for having a socialist-feminist ideology.

They were later joined by the Peshmerga – Kurdistan government fighters – and backed by US airstrikes. The Kurdish-Turkey conflict creates a substantial barrier to the defeat of Daesh.

The western ‘war on terror’ and the rise of violence

The ‘War on Terror’ began 14 years ago as a wide-ranging military response to the 9/11 terrorist attacks in the US.

The rhetoric of a war on terror has since been abandoned by administrations in the US, Britain and elsewhere, but the strategic orientation and avowed aim of defeating terrorism have not changed.

The west’s theatres of war since the beginning of the campaign have included Afghanistan, Pakistan, Iraq, Lebanon, Syria, Libya, Yemen, Somalia and Mali. In each of these countries Islamist militancy has maintained or increased substantially during the period of military action.

The respected geo-politics journal ‘Foreign Policy’ has documented the explosion of terrorist incidents since the onset of the war on terror in 2001. For example, it found that in the six years between 2004 and 2010 there were 54 times more attacks on Western targets in Muslim countries than there were in the 23 years between 1980 and 2003.

There is also evidence for the expansion of direct support for Daesh since the United States began bombing the terror group. In the first six months of the US’s bombing campaign, the Pentagon reported that 19,000 foreign fighters had flocked to Daesh’s banner .

There is little evidence to suggest that military action has been effective in reducing the influence of Jihadi terrorist movements.