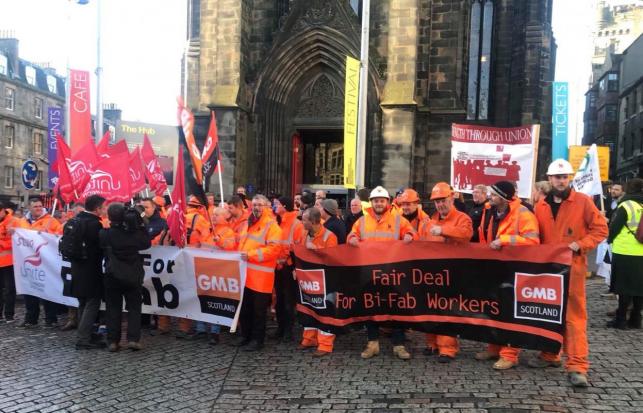 THE engineering firm Burntisland Fabrications has issued fresh warnings of redundancies threatening the future of the yards in Fife and Lewis and over 200 jobs, the trade union Unite has said.

Workers at BiFab staged an “historic” work-in during November last year to save the ailing company after a dispute with Dutch-based Seaway Heavy Lifting over an unpaid bill.

Trade union officials from Unite said they had been told by managers at the yards that redundancy notices will be given to the core workforce on Tuesday, Unite warned upto 260 jobs could be lost if the yards are closed.

Read more: BiFab workers marched on Holyrood amid the “biggest industrial dispute in a generation”

Scottish Government intervention in November last year saved the yards, with the offer of a commercial loan from the government to save the engineering from liquidation.

First Minister Nicola Sturgeon praised the BiFab workers at the time, saying their actions had bought time for negotiations.

Visiting BiFab in Methil this morning to thank the workers for their dignity and determination last week in the battle to save the company from administration – and to pledge the continued support of @scotgov in securing future success.

The company has said these fresh warnings are due to the completion of its current contract for the Beatrice Offshore Windfarm.

A Unite spokesperson warned that unless new contracts were secured, then the yards would close by the end of June.

Bob McGregor from the union said it was not a “total shock” as work at the yard has been running down for weeks now.: “So much has been done to save these yards until now.

“The workers there have fought for their future and it is difficult to believe that it can now be snatched away from them.

“The closures of these yards will turn these areas into an industrial graveyard. The prospect fills us with dismay.”

Scottish Government economy secretary Keith Brown said the government would do what it could to secure the long-term future of the yards and support the workers: “This will be hugely concerning for the workers affected and their families.

“Scottish ministers have offered support to BiFab to allow work to continue on the contracts for the Beatrice offshore wind farm development.

“Ministers recognise that more work remains to be done to secure the long-term future of the company and are fully committed to offering support where possible to attract long-term investment in this vital sector of the Scottish supply chain and economy.”

“Ministers recognise that more work remains to be done to secure the long-term future of the company.” Keith Brown

Labour’s shadow Scotland secretary and MP for area, Lesley Laird, told Commonspace the news was devastating for BiFab workers and their families: “I think everyone recognises that when the Scottish Government intervened it was a stay of execution and that, following the completion of the Beatrice contract, further work was needed to save the yards.

“This announcement increases the urgency for a successful outcome – both for the workforce and the supply chain – but it is imperative that scheduled work continues.

“Securing future contracts is vital to securing the long-term future of the yards and BiFab’s workforce skills, not only for the benefit of local communities here in Fife and Arnish but in terms of Scotland’s wider industrial strategy in the renewables sector.”

“The battle for BiFab continues. All is not lost and there is still hope but time is of the essence.” Alan Ritchie

GMB Scotland, the other union represented at the yard, said hope was not lost. Organiser Alan Ritchie said: “The battle for BiFab continues. All is not lost and there is still hope but time is of the essence.

“Next week, we have a crunch meeting with the Scottish Government and thereafter we will have a better understanding about new investment coming into the yards and the long-term future. We have always been clear that our yards should not be struggling and what we need is an industrial strategy to end the feast and famine in contract work that plagues our manufacturing sector.

“There is also a long-term responsibility on our politicians to ensure that never again does our manufacturing sector end up with less than three per cent of the value from a £2.6 billion infrastructure project.”