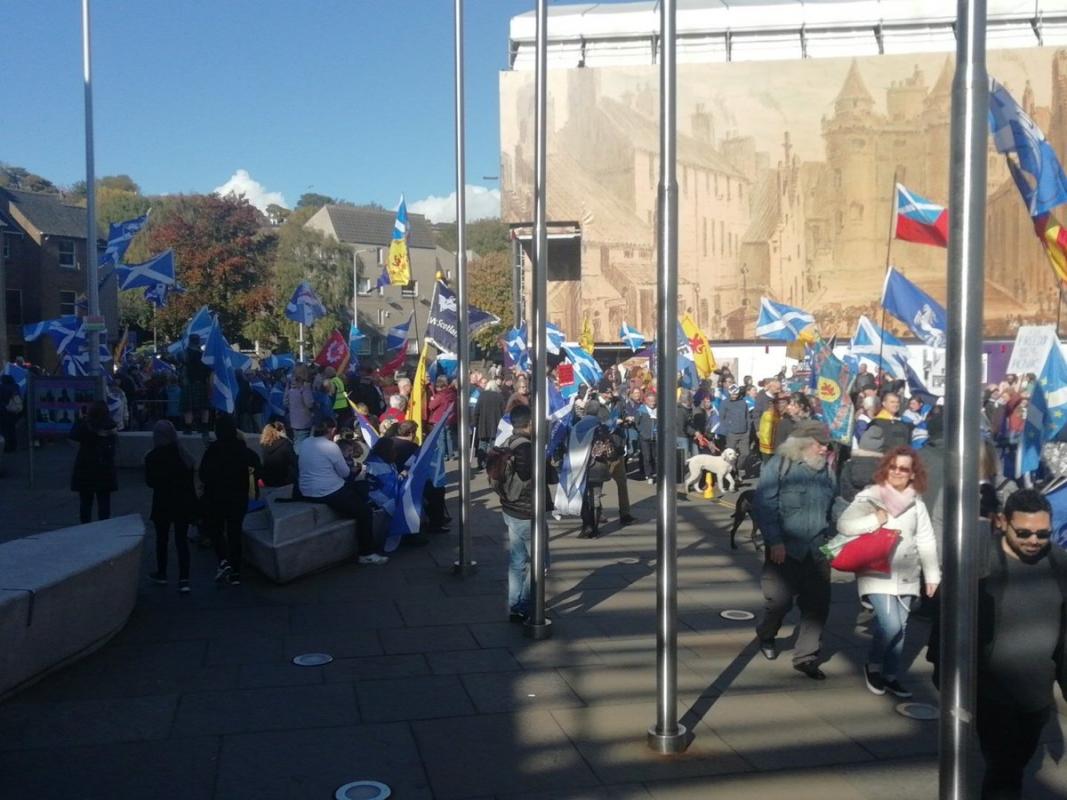 THE All Under One Banner march for Scottish Independence on Saturday [7 October] has been touted as the biggest ever independence march in Scottish history.

Organisers said 100,000 attended on the day. The march through the capital follows demonstrations in Glasgow, Dumfries, Bannockburn and Dundee, and comes just as the SNP Annual Conference begins in Glasgow.

Below are videos and pictures of the demonstration from CommonSpace and others who were present in Edinburgh on Saturday.

Edinburgh north & Leith foodbank raising food and money at the #AUOBEdinburgh demonstration. Say they are getting a big response from marchers. #AllUnderOneBanner pic.twitter.com/iMj0m6RcQj

#AUOBEdinburgh timelapse from the pass-by camera.

Cramming the huge volume (2h20m worth) of marchers into 2m20s was a challenge. Steady flow of people walking up the hill past our camera and the way the march was broken up into chunks adds some chaotic elements to the timelapse. pic.twitter.com/Ojmd3k2R0d

Not often you see history & the future side by side. And doesn’t it look beautiful? #AUOBEdinburgh pic.twitter.com/biG3gk8X8P

Front of the march, including snp deputy leader Keith Brown, chanting “what do we want? Independence. When do we want it? Now!” #AUOBEdinburgh #AUOB #AllUnderOneBanner pic.twitter.com/FrZwUMpLgC

View from Arthur’s Seat. Majority of the march still not made it to the rally point #AUOBEdinburgh #AllUnderOneBanner #auob pic.twitter.com/IRDfQOvLkZ

#AUOBEdinburgh as a former “no” voter I marched for independence amongst 100,000 comrades today. I want to vote Indy ASAP, Bring it on now! pic.twitter.com/J9GgD9CvYu

Back of the march just passing the parliament, heading for Holyrood Park #AUOBEdinbugh #AUOB pic.twitter.com/N7xKBjXYyP

There is a whole other section of the march which stopped before the rally just after the parliament. Could be 10000 at this bit. Hard to get a handle on numbers but it’s a big demo. #AUOBEdinburgh pic.twitter.com/AVFAyFFtdX